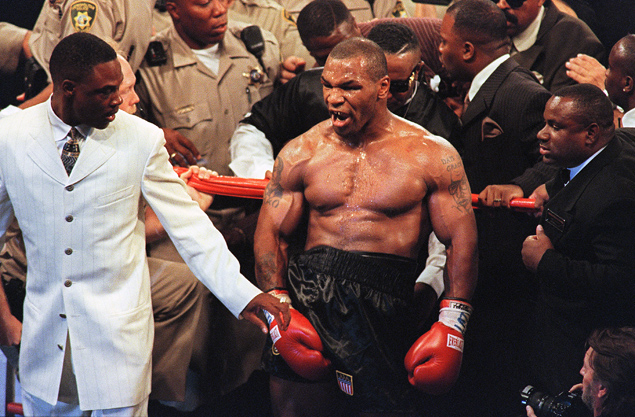 Mike Tyson reacts after being disqualified at the end of the third round of his heavyweight title fight with Evander Holyfield in 1997. Tyson, who retired in 2005, has changed much – and for the better – since the infamous “Bite Fight.”

It was difficult to reconcile the jolly man with the booming laugh and indelible smile with the glowering menace flickering on the TV screens at the Bounce Sporting Club in Lower Manhattan on a recent sultry summer evening.

But there was Mike Tyson sitting at a table, glad handing reporters, being charming, laughing during a question-and-answer session. Above him the big screen televisions played high-definition images of a younger Tyson making a third-round snack of Evander Holyfield’s right ear during their heavyweight championship rematch in 1997.

If there is a way to be the ex-Baddest Man on The Planet, Tyson has found it. 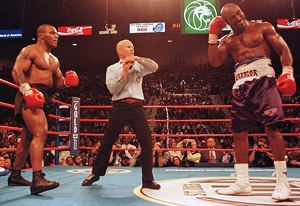 “I was a vicious guy back then,” Tyson said. “I thought I shouldn’t even have gotten disqualified at the time. Since then I’ve received a lot more knowledge of right and wrong. I really didn’t feel bad that night.”

The events of that night have been captured in a book entitled “The Bite Fight – Tyson, Holyfield and the Night that Changed Boxing Forever” by George Willis, a columnist and boxing writer at the New York Post.

Willis convinced Tyson and Holyfield to relive the fight and that night for the book. Tyson even wrote the forward to the book.

“It was perfect timing because he’s at a place now where he’s come to grips with his past and he’s more concerned about his future. Like he was today he was all smiles and joking,” Willis said.

“It wasn’t something he was trying to run away from. You know that Mike doesn’t run away from anything. He’s very open about it. He understands that it’s as much a part of his legacy as the great knockouts and winning the heavyweight championship.”

Tyson said the only thing on his mind that night was winning. He had lost the first match on an 11th-round KO and had blamed Holyfield’s incessant head butting with pushing him to the point of nearly blacking out in that fight. He didn’t want the same thing to happen again.

“I wanted to win real bad. I got in good shape for the fight,” Tyson said. “We were clashing heads. I was hitting him with my head too. He could head butt better than I could. I felt myself blacking out like the first fight. I was trying to complain to referee Mills Lane during the fight. He didn’t give me any love at all. I didn’t care anymore.”

So he bit Holyfield – not once, but twice in the third round. The second time was the charm as Lane disqualified Tyson for committing one of the most heinous acts ever perpetrated in a boxing ring. You ask Tyson why he didn’t take a more conventional route to the DQ. 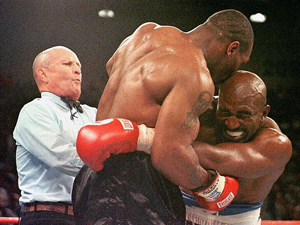 And by “low” he wasn’t talking about below the belt. He was talking about a degrading foul the likes of which had never been seen in a modern boxing ring in a heavyweight championship fight and hasn’t been seen since.

It was perhaps one of the strangest incidents in a long line of bizarre things that have happened at boxing matches. Tyson had his boxing license revoked by the Nevada State Athletic Commission and was fined $3 million. He and Holyfield appeared on “The Oprah Winfrey Show” and Tyson officially apologized to Holyfield in 2009. Holyfield accepted the apology.

“As I was talking to people and telling them I was doing this book on the Bite Fight and they would say, ‘Yeah that was a crazy night. But the Fan Man fight was really crazy,'” Willis said. “I think people who were at both fights think that the Fan Man fight was a little more crazy, surreal with some guy coming out of the sky. The riot at the Garden with (Andrew) Golota (and Riddick Bowe). Boxing there’s always going to be something that’s going to happen that you don’t expect.”

You certainly wouldn’t have expected that maniacal version of Mike Tyson to be holding court in a room full of people celebrating the release of a book about the incident 16 years later.

But this is a kinder, gentler Tyson. He is a vegan now. So ears are definitely no longer on the menu.

He has a charity – Mike Tyson Cares Foundation – that helps young people who are hit by economic hardships. His one man show – “Undisputed Truth” – toured the nation and now it’s being filmed by HBO.

“Not many people have been as fortunate as I have. And I’m really grateful for that,” he said.

Tyson has even started his own boxing promotion company and reached out to Holyfield to offer him a fight against Shannon Briggs. Holyfield turned down the fight.

You try to reconcile that man who would sink to the level of taking a piece of another man’s flesh during a competition with the man standing before you, who is smiling and shaking hands and laughing with fans and reporters. It doesn’t make sense.

Someone asked Tyson how he felt reliving all the horrible events associated with the bite fight.

“At the time they weren’t great at all. They are now,” he said.