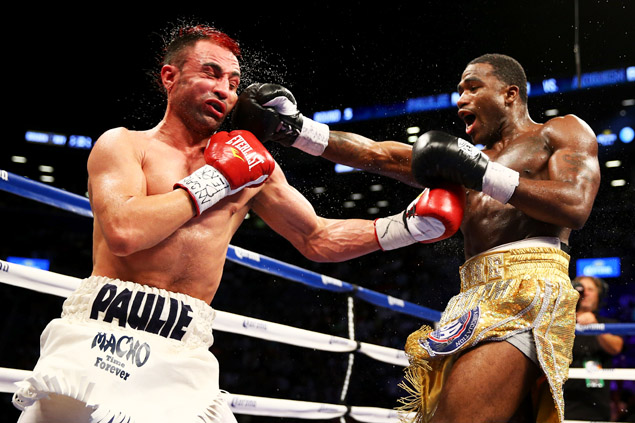 THE RING’s welterweight rankings experienced a shake-up due to Adrien Broner’s WBA title-winning split decision over veteran Paul Malignaggi on Saturday, and Victor Ortiz being dropped due to inactivity.

At heavyweight, once-beaten American prospect Seth Mitchell avenged his KO loss to Johnathon Banks with a dull unanimous decision. No changes in THE RING’s heavyweight rankings.

At cruiserweight, No. 2-rated Krzysztof Wlodarcyzk scored a come from behind KO of Rakhim Chakhkiev in the eighth. Wlodarcyzk (48-2-1, 34 knockouts), the WBC titleholder, lost the first four rounds. He was dropped in round three and took punishment for the next few rounds until he suddenly dropped Chakhkiev (16-1, 12 KOs) with a short left hook at the end of round six; Chakhkiev, the NO. 10-rated contender, was dropped again in round seven. After Chakhkiev was floored two more times in round eight, the bout was stopped. No changes due to Chakhiev’s valiant effort and strong early showing. If someone does well in the next few months we will look closely at the ratings. 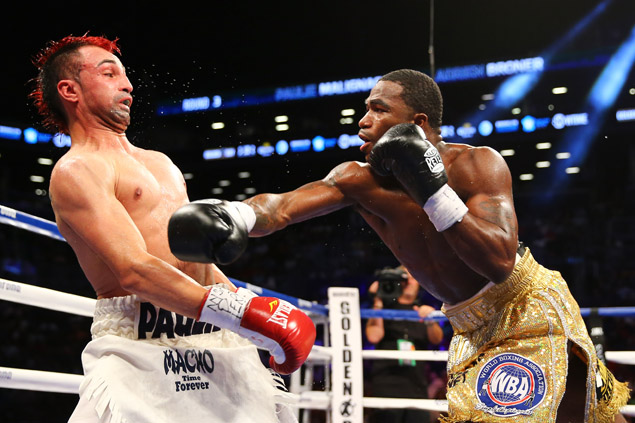 At welterweight, Malignaggi gave Broner plenty of trouble. Broner (27-0, 22 KOs) moved up two weight divisions to win a split decision in what many thought was a close fight although one judge had it wide at 117-111 for Broner (as did many members of the ringside press).

Verifying how close the official scoring was: one judge had it 115-113 for Broner; one judge had it 115-113 for Malignaggi. One round different by both judges could have made it 114-114, a draw. That’s why the 117-111 score was too wide based on the other two judges’ scores. Still, Broner defeated the No. 4-rated contender; and based on his performance he will be rated No. 7. Malignaggi drops to No. 8.

Ortiz will be dropped from the ratings due to lack of activity for just over one year. Broner will remain No. 1 in the lightweight ratings until we know the division he will fight at next.

At junior featherweight, three-division beltholder Fernando Montiel knocked out Jaderes Padua in the third round. No changes.

At flyweight, THE RING’s No. 8-rated contender Juan Carlos Reveco scored an eighth-round KO over Ulises Lara to stay active in our ratings. No changes.

In the Pound-For-Pound ratings, Broner drops below Manny Pacquiao after his less-than-spectacular showing over Malignaggi. Although winning a major title in his first bout at welterweight, and having won belts at 130 and 135 pounds, is impressive, members of the Advisory Panel pointed out that he basically performed about as well as Pablo Cesar Cano did against Malignaggi (without scoring a knockdown). The new pound-for-pound lineup is as follows:

Chuck Giampa is the Chairman of THE RING’s Ratings Committee. He can be contacted at [email protected]