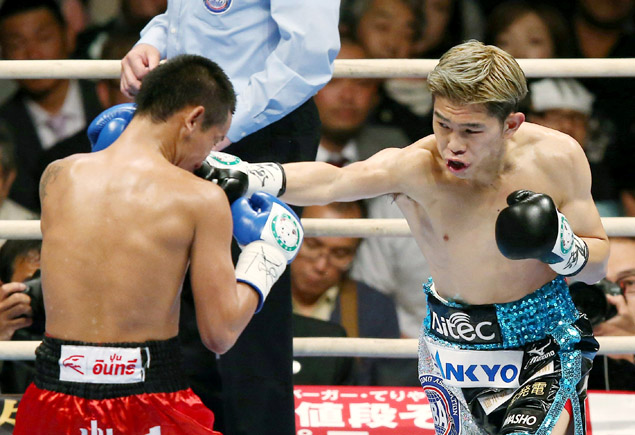 Kazuto Ioka is one of the best fighters today that the western hemisphere will probably never see, but fans in his hometown of Osaka, Japan, sure appreciate him.

The highly-partisan crowd at the Bodymaker Colosseum erupted in applause for the 24-year-old Ioka (12-0, 8 knockouts) following his ninth-round knockout victory against overmatched Thai Wisanu Kokietgym (43-9-2, 13 KOs) on Wednesday night. Ioka set the knockout up with two left hooks to the body, followed by a right uppercut to the solar plexus that caused Kokietgym to collapse onto his back for the count at the 2:51 mark.

Ioka, who is ranked No. 5 by THE RING at 108 pounds, continues to fill out in his new division after a successful run at strawweight highlighted by his WBC/WBA unification bout win over current RING flyweight champion Akira Yaegashi last June.

Ioka, 24, used his superior boxing skills to pick apart the southpaw Kokietgym’s defense in the early going before turning up the heat in the third round with hard body shots and right crosses, which he often doubled up. Kokietgym, who has now sustained seven losses by knockout in a career that spans 12 years, was unwilling to yield in his first attempt at a world title, which opened him up to sustained punishment.

If Ioka is looking for a greater challenge to generate attention internationally, he won’t have to look too far.

A clash with Nicaraguan knockout artist Roman Gonzalez, who is rated No. 1 by THE RING at junior flyweight, has the potential to be the most exciting little fight in boxing since Michael Carbajal-Humberto Gonzalez. Roman Gonzalez (34-0, 28 KOs), who is scheduled to face Ronald Barrera in Nicaragua later this month, is promoted by Japan-based Teiken Promotions. 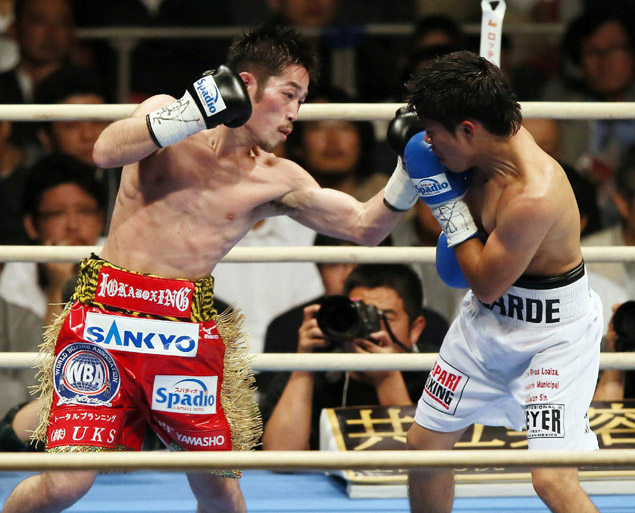 The WBA, in their ceaseless campaign to confuse boxing fans, have managed to recognize both Gonzalez and Ioka as champions at 108, and no plans have been made public yet to rectify the situation. A fight between the two unbeaten champions seems the best way to resolve matters.

If Ioka’s superiority was evident from the first bell, WBA strawweight titleholder Ryo Miyazaki kept fans in suspense up until the final blow. The 24-year-old Miyazaki (19-0-3, 11 KOs) looked to be on his way towards a long war of attrition with Carlos Velarde (23-3-1, 13 KOs) of Culiacan, Mexico.

Just as it appeared that Velarde’s constant pressure was beginning to take its toll on Miyazaki, the incumbent titleholder settled the issue with a resounding counter left hook that rendered Velarde unconscious. Referee Raul Caiz Jr. immediately stopped the bout without a count at the 2:22 mark.

Miyazaki, who won the title with a split-decision win over Pornsawan Porpramook on New Year’s Eve, is currently ranked No. 6 at 105 pounds by THE RING.

The show was promoted by Kazuto Ioka Promotions.