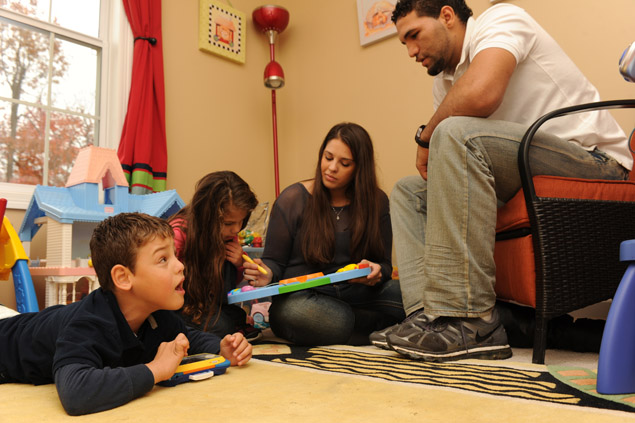 “I was young and really open minded,” Rodriguez said. “I was happy to be in the U.S. It was a whole different world but I was able to pick up English quite fast.

“Luckily there was a bilingual program my first year in school and then I went into regular classes. I was working in my Dad’s store and listening to everybody. I wasn’t always understanding but I heard it. It was interesting and I worked hard at it. I think it’s important to maintain your language but if you’re in the U.S. you need to know proper English.

“My Spanish and English are about even. I speak English more now so it takes me time to get into the rhythm of Spanish.”

Rodriguez’s boxing skills developed as quickly as his language skills, mastering both while still a teenager. By 19 he was one of the top-rated amateurs in the U.S. and by 21 a young man in love with a new dream and his future wife even though there could have been no more mismatched pair than a college honor student whose parents were Holy Cross professors and lab supervisors and a Dominican-born boxer hoping to make his way in the world as a prize fighter. 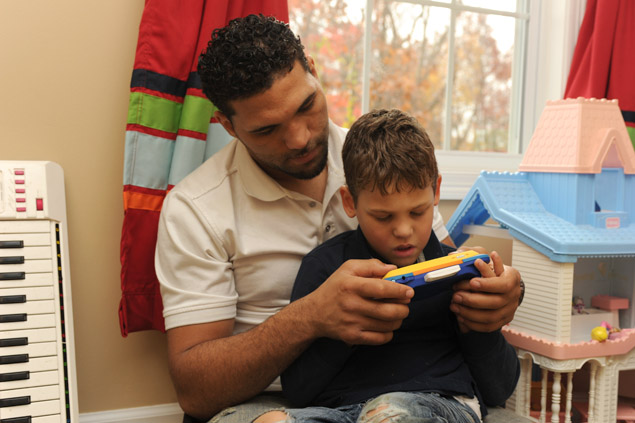 Love is blind, of course, which was a blessing for both them and their children. It cares not about backgrounds or the difficult circumstances you were born into. Love is love and often it is enough.

“We were definitely from two worlds,” Rodriguez said. “Stephanie was in college. I was in the ring. But she was supportive of me and boxing. She understood I was good at it and she knew how bad I wanted this.

“I love proving myself 1-on-1. Once you get in there you’re on your own. You got nobody to blame but yourself. It’s a great feeling of accomplishment to go in there and perform.

“People don’t understand, I don’t think, the 100 percent focus you need to be successful in boxing. Your job is to harm another guy and then switch it off and come home and be a father, a husband. That’s not easy.

“I go train in Houston (with veteran trainer Ronnie Shields, who has worked with him his past four fights). I went overseas to work as a sparring partner for guys like Carl Froch, leaving my family with two kids with disabilities. It’s a selfish business in that aspect but you have to be. No one else is going to step in there but you.”

Army had agreed to manage him but like a lot of guys who come into boxing from the real world, he had no idea what he was getting into. Truth be told, neither did Rodriguez, at least not when it came to the fight outside the ropes.

“I didn’t know how the game worked, thank God,” said Army, who had represented some professional basketball players but no boxers. “I can’t believe the things I’ve seen and the things people say. Sometimes I feel like I have to take a shower every time I have a business meeting, but that naivete of believing in a guy takes you along.

“I equated signing him to signing a lottery pick. I didn’t realize how difficult the boxing business is. We didn’t have a promoter our first nine fights. Half the guys I spoke with sounded like criminals. Nobody does anything for you. We were having pre-fight meals at Burger King like a bunch of kids.” 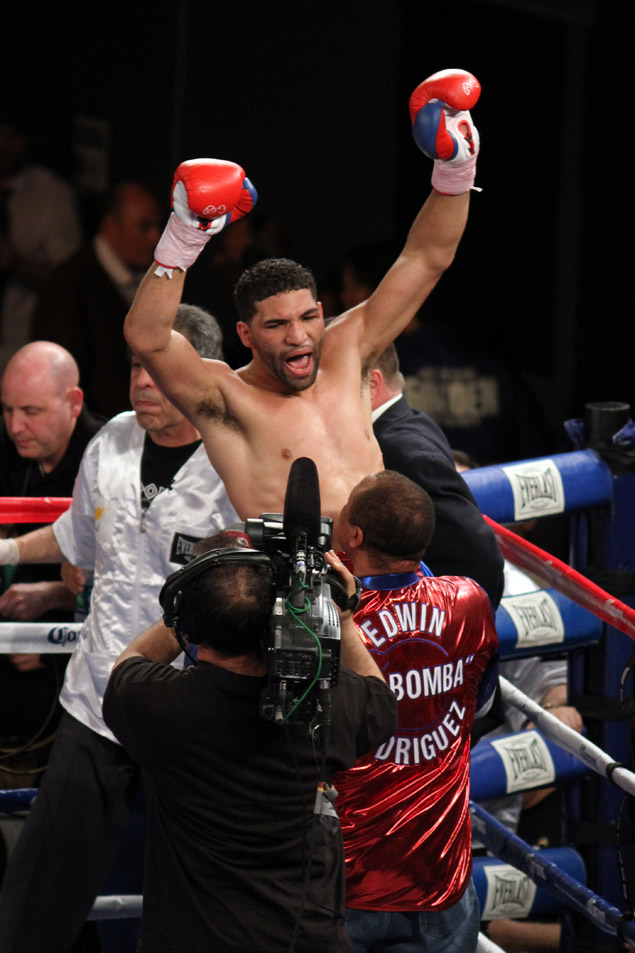 Rodriguez made the road a bit easier by knocking out 13 of his first 17 opponents and signing with promoter Lou DiBella. He was rising slowly, like well-baked bread, winning 22 straight fights, 15 by knockout. He’s been on ESPN’s Friday Night Fights, ShoBox: The Next Generation and twice on HBO, his biggest win – after stopping Buddy McGirt Jr. and easily outpointing Aaron Pryor Jr. to separate himself from the crowd of prospects – coming last March when he outpointed Donovan George (23-3-1, 20 KOs) at Madison Square Garden in his HBO debut.

Such are the oddities of boxing, however, that two fights after Rodriguez easily outboxed George it was George who found himself in an IBF title eliminator against Adonis Stevenson, who stopped him in the 12th round while Rodriguez was defending the USBA middleweight title at a Connecticut casino against undefeated Jason Escalera (13-0-1 at the time).

Despite being ranked No. 2 by the WBC, No. 3 by the IBF and No. 5 by the WBA, his short-term future remains in limbo, a contender waiting for his chance to contend. DiBella, frustrated by the difficulty of getting Rodriguez a shot at names like Froch or Lucian Bute, is considering taking him into a four-man tournament backed by the Prince of Monaco to further build his brand while waiting for what they all believe, despite odds as long as those overcome by his children, will be his opportunity.

“Edwin is someone the networks should be all over,” DiBella said. “He’s an aggressive fighter who is perfect for TV. He’s a good looking kid with a great story. Unfortunately, we’re in an age where we don’t go up close and personal with fighters. The networks spend more time with assholes who want to comb their hair in the ring [read: Adrien Broner].

“The uneven playing field that exists in televised boxing today is a lot of the reason he isn’t a network darling. He’s a TV-friendly offensive machine. He’s building a following. I just wish network executives understood his ‘everyman’ appeal.

“I think he’d beat Froch, Bute, Jean Pascal or (Mikkel) Kessler, which is why we can’t make a deal with any of them. I always liked him as an amateur. I thought he was a great prospect. I liked his character. That kid is battle tested.

“Now Ronnie, who I think is one of the best trainers in the world, is making him a complete fighter. Donovan George is a guy who’d taken everyone to the brink and Edwin boxed his ears off. He’s ready to beat the top guys.”

Rodriguez has no doubt about that, for early in his development he tested himself as a sparring partner for Froch, Pascal and contender Daniel Geale, traveling to Australia, Miami and England. He learned firsthand what he needed to know.

“I was sparring at the highest level,” Rodriguez said. “I learned how you run a training camp and that I belonged at that level. It’s a good way to find out if you fit in because this is no sport to be No. 2 or No. 3. If I didn’t belong it would have been discouraging, but it gave me confidence in my skills.”

Unfortunately, it may also have given advance warning to guys like Froch, who after defeating former middleweight champion Arthur Abraham in Showtime’s Super Six World Boxing Classic, said of Rodriguez, “Sparring with Edwin was brilliant. He got me ready for this. He’s very fast, can punch with both hands and stays in there at times like Abraham will, but I feel he has far more natural ability and speed than Abraham.”

Maybe, to a degree at least, that is now his curse?

“There’s no downside for a young fighter to get work like that,” DiBella said. “It’s not a double-edged sword when you’re the kid but, yeah, they got to see how scary he is and that has not served him particularly well.” 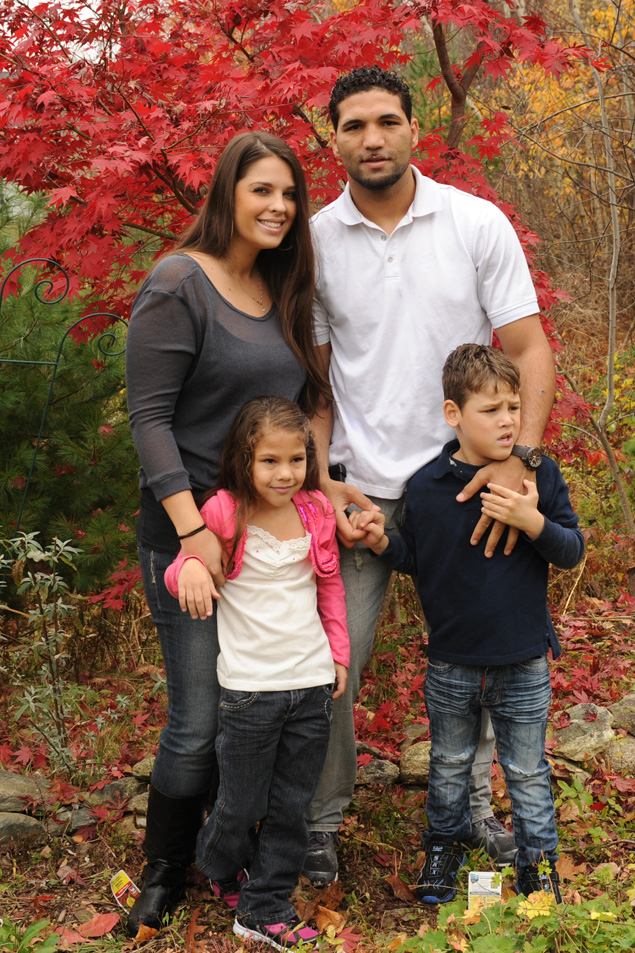 Both the art of boxing and the business of boxing are like chess matches. Often the most important thing is the set up, the creation of opportunity through deception and planning. Rodriguez is at that stage in the ring, where Shields continues to work on his defense and keep his penchant for aggression under control, while DiBella and Army labor to find him the fight that can change his life.

Rodriguez has been prepared for that by the choices he’s made, in this case the choice of a board game over video games.

“I started playing chess when I came to the U.S.,” he said. “I thought it was very interesting. My Dad and I played every night. The next year I won the championship of my school and started paying other middle schools. I still didn’t know English that much. I was playing one kid and he kept asking if I wanted a draw. I just kept staring at him. I didn’t know English but I wasn’t stupid. I beat him.

“My style in chess is just like in boxing. I’m aggressive, always trying to set up the knockout. Thinking of chess like a battle helps my boxing. You have to stay ahead of your opponent.

“I play online now and I do OK but I have a little issue. I start training for a fight and forget to (finish chess matches). When I get back to it, I’ve lost 16 matches or something and have to start over. That’s discouraging.”

At times so is the business of boxing — but never the sport. For that he has only love and the same blind faith that kept him fighting for his kids.

“It’s not fun, the business side,” Rodriguez said. “I enjoy training, figuring out an opponent, but feeling that everything depends on one fight, every day being on the edge of being fired – it’s a lot of pressure.

“I love boxing but it’s a tough sport to make a living at. It’s not like baseball or basketball or football. There’s no set salary. You’re a professional athlete but you don’t get paid like a professional for a long time. Only Top 10 guys get paid, really. Until then you’re not really a professional because you’re not paid like one. I’m doing well now but it’s not an easy road. I wouldn’t want my kids to have to deal with it.”

His kids, he knows, have actually had to deal with much more. They are the Fighting Rodriguez kids, two little champions in a house that hopes one day soon to add a third.

“I’m not going to lie: It’s big-time hard sometimes but you have to keep moving forward. I use what they’re going through as motivation. Seeing my kids struggle day after day, making a little progress, helps me appreciate the little accomplishments.

“My job is to give them the best life possible. I can only do that in boxing. Feeling sorry for myself is not going to help anybody. This is the hand we’ve been dealt, and I’m going to play it the best I can.”