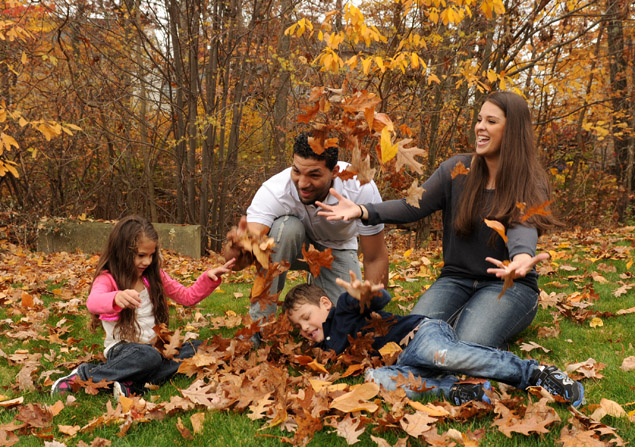 Edwin Rodriguez with his children, Serena and Edwin Jr., and his wife, Stephanie (Photo: Emily Harney).

This article appeared in the April 2013 issue of THE RING Magazine. To subscribe, go to https://www.ringtv.com/subscribe

By any measureable standard but his own, Edwin Rodriguez is a fighter. He is in fact one of the best super middleweights in the world, a fighter hovering on the edge of his moment. Yet when he hears that title ascribed to himself, Rodriguez has to laugh.

In his family, you see, he may be The Boxer but he is not The Fighter. That is a title that belongs only to his son and daughter, 6-year-old twins who have been fighting since the moment they came out of the womb.

Born nearly four months premature and only a few days beyond the cutoff for viability, Serena and Edwin Rodriguez Jr. would spend the first 122 days of their lives in the University of Massachusetts Memorial Medical Center’s neonatal intensive care unit in Worcester. For much of that time machines would breathe for them, a situation with painful long-term consequences. But before their parents had time to worry about that, they first had to worry about the short-term fact of two tiny babies facing a daily life-and-death struggle that, frankly, carried with it odds far longer than the ones their father has faced trying to become a world champion. 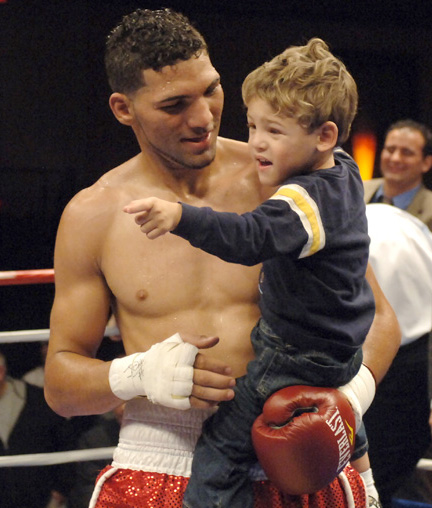 Labeled “micropreemies,” Rodriquez’s children weighed only 19 ounces each at birth and almost immediately began to lose weight, Serena at one point dropping below a pound. Their original diapers fit snugly onto a golf ball and their eyelids could not yet even open, fused shut because they were not ready to see the world they had entered so unexpectedly.

Noise was all but forbidden, even a soft lull-a-bye from the voice of Rodriquez’s then-fiancee and now wife, Stephanie, because they were so frail even sound could cause life-threatening drops in their oxygen level.

Normally even the healthiest babies cry. It is their first way of communicating. Ones suffering the way Rodriquez’s two children were should have wailed but their bodies would not allow them to even whimper. Regardless of what road The Boxer’s life would take the great fight of his life had begun: two babies who knew pain before they knew their names; two babies who learned how to fight long before they would know the art their father exhibits inside a boxing ring.

A love story, it seemed, had turned into a tragedy. An Olympic dream had faded. Decisions every parent fears even having to consider were staring back at two 21-year-old kids: a ring of experienced doctors urging Stephanie and Edwin Sr. to accept the sad reality that their son was not going to make it and their daughter was facing a climb so uphill it made Everest look like a knoll.

“We didn’t have much hope at times but I tried to stay positive because I knew what the right decision was. So I cried when my wife wasn’t looking.”

At 21 days Serena needed surgery to close a hole in her heart, a difficult operation requiring general anesthesia. She weighed barely a pound but survived only to have her lungs collapse. With warning signals screaming, two helpless parents waited for a miracle. They got one. It would not be the last.

Young Edwin’s lungs were so poorly developed that those caring for him believed he would not survive. Few micropreemies as dependent on a mechanical oscillator for pumping oxygen to breathe survive long. Barely a month after his birth, which had been the same day as the opening of the National PAL tournament Rodriguez was set to compete in as a qualifier for the 2008 Olympics, doctors at the NICU sat down with Edwin and Stephanie and gave it to them straight: Their son’s chances of survival were statistically zero.

As they sat stunned and silent, the Rodriquez family was told in the previous 20 years no baby at UMass Medical Center, a facility designed to care for high-risk neonatal cases, had ever survived after such an extended period on such high oxygen settings on an oscillator. At one point it had been hoped he could begin taking steroids to help his lungs develop but the doctors no longer felt that would be helpful or even possible because an infection had set in. 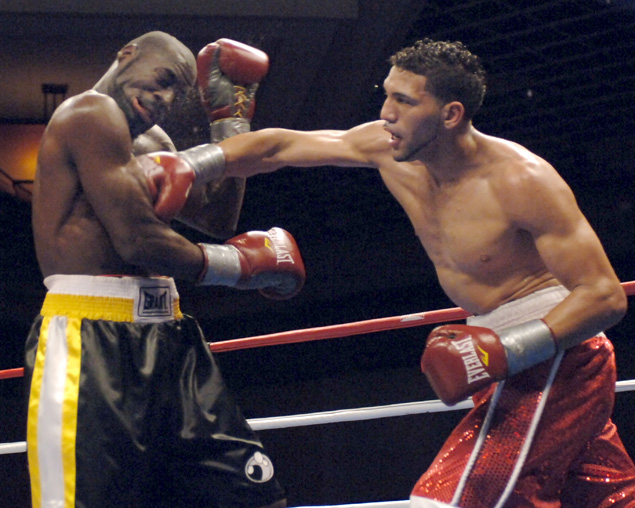 It was at that moment of utter despair that The Boxer fought for his son. Boxing is the sport of lost causes and denial. It is a place where you fight on long after logic and common sense have refused to support your dreams. The odds against anyone becoming a world champion are so long you can’t get action on them in Vegas. The odds of a kid born in poverty in the Dominican Republic emigrating to New England, no boxing hotbed any more, and making it in prize fighting are vastly worse. So Edwin Rodriguez long ago had learned to ignore long odds.

Like most young boxers, he lived in a world of blind optimism and faith in one thing: the words of the old heavyweight champion James J. Corbett. Corbett was once asked what separated champions from the rest. His reply echoed inside that hospital room.

“You become a champion by fighting one more round,” Corbett said as if talking to Edwin and Stephanie Rodriguez. “When things are tough, you fight one more round.”

Painful as it had become to watch, that is what The Boxer wanted to ask of his children, his wife, himself and their doctors: Fight one more round. Frankly, his wife didn’t really want to hear it.

The choice was not easy and initially Stephanie angrily questioned his blind optimism. A 2005 honors graduate of Holy Cross, where her mother and stepfather taught and worked in the organic chemistry lab, Stephanie Rapa Rodriquez was a well-educated woman on her way to law school after winning an academic scholarship when she became pregnant.

She had fallen in love with a Dominican-born boxer she met while working a legal internship at the Worcester Boys and Girls Club, where he trained. At the time Rodriquez was National Golden Gloves champion and USA Boxing’s reigning middleweight champion, someone earmarked for the Olympics in Beijing.

But about the time the PAL qualifying rounds began, his children were born and a real fight began, one more important than gold medals. It was a fight for life and for love, a fight that replaced an Olympic dream with a greater one.

“It was a lot to handle at the time,” Rodriguez admits today. “My kids were in the hospital for 122 days. I was supposed to be getting ready for the Olympic Trials. I was supposed to go to the PAL tournament but I didn’t go. It was an easy decision.

“I thought it was only the first qualifier, and because I was already on the national team I only had to be in the top eight of a qualifying tournament. But I went to Nationals and lost my second fight right before the top eight. My mentality was just get to the top eight and maybe things would be better with my kids. I didn’t feel I had to be at my best and lost to a young kid in a close fight.

“I was supposed to go to the Pan-Am Games but I didn’t go. I only went to England for a dual meet because I would have lost my stipend if I didn’t. I lost a decision to James DeGale. I was going to the gym, so physically I was there but mentally I wasn’t.

“I know how it feels to be so close to your dream that you can grab it and you have to let it go, but I know it was the right thing.”

One loss brings another gain and so the decision to ignore the doctors and the overwhelming evidence in front of them was made. One day later their son stopped breathing.