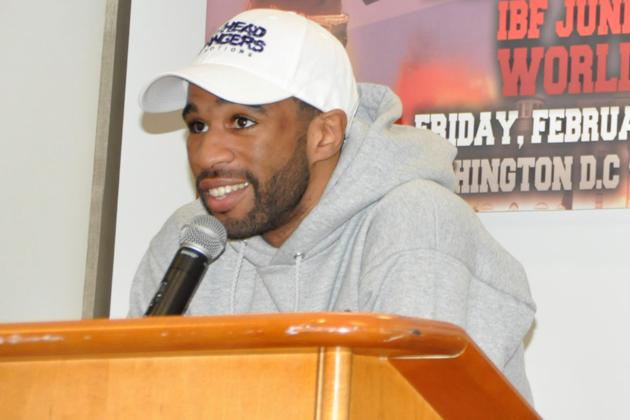 WASHINGTON, D.C. — When he last fought in his home town of Washington, D.C., in December of 2011, Lamont Peterson attracted around 10,000 fans to the Washington, D.C. Convention Center, where he beat Amir Khan by split decision to win his IBF title.

On Friday, Peterson (30-1-1, 15 knockouts) will face hard-hitting ex-beltholder Kendall Holt, of Paterson, N.J., at The D.C. Armory, in what represents both his first fight since the layoff and the first defense of his crown.

Peterson-Holt (28-5, 16 KOs) will be televised on ESPN2’s Friday Night Fights, and has the makings of an old-fashioned brawl.

So intriguing is the matchup, that even WBC lightweight beltholder Adrien “The Problem” Broner expressed his excitement for it during Wednesday’s press conference at The Dow Lohnes building in Washington, D.C.

“This is a helluva matchup, man,” said Broner, who scored his sixth straight knockout victory on Saturday night against Gavin Rees. “This is two hungry guys and two good boxers. Two strong boxers. It’s going to be a helluva match.”

“I know that he’s going to bring it, and I’m coming to bring it. I think that this will be the first time since I’ve met him that I haven’t rooted for Lamont to win. I rooted for him against Amir Khan, and in some of his other big fights, but this is the first time that I’m rooting for him to lose. This fight can change my life, so I have to take him seriously. I was able to go to training camp, when I’ve never really had that luxury like some other fighters,” said Holt, 31.

“I’ve been raising my son now since he was 2 for eight years now. When he started school, it was hard to get away and go to the gym. My son is 9 now, and, through the grace of God and family and friends and a good manager, I was able to go away and train for this life-changing experience that’s going to happen on Friday night. I know he’s going to come with those hard shots to the belly and he’s going to keep coming all night.”

Holt has been knocked out by Thomas Davis, Ricardo Torres and Kaizer Mabuza in June of 2004, September of 2007, and, February of 2010, respectively.

During his July 2008 rematch with Torres, who entered their return bout with a mark of 32-1 that included 29 knockouts, Holt rose from two knockdowns and scored one of his own during a 61-second bout.

Holt twice dropped Bradley to the canvas before losing his WBO 140-pound title by unanimous decision in April of 2009. Since then, however, Holt has since gone 3-2 with three stoppage victories.

“Everybody asks me about my power. Do I expect to knock Lamont out? I don’t. I have a job, and no matter how early I leave, I still get paid. That’s the benefit of being a boxer. Plus, Lamont is so resilient, and he’s always in shape, so I know he’s going to be there until the 12th round,” said Holt.

“I’ve been a pro for 12 years, but this is actually going to be the first fight where I’m walking in with an actual game plan. So, that’s how seriously I’ve taken this fight. This fight can change my life, and my kid’s life, and I’ve taken every precaution to assure a victory. So now, I’ve just go to out on Friday night and do what I’ve trained to do.” 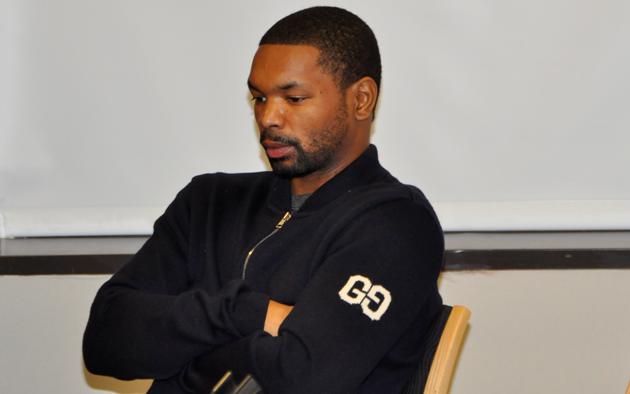 Meanwhile, Peterson, who turned 29 last month, is 3-0-1 with two knockouts since falling by unanimous decision to Bradley as a junior welterweight in December of 2009.

Peterson’s subsequent 12th-round stoppage of Victor Cayo in July of 2011 was followed by the victory over Khan.

Peterson said he does not believe that rust will be a factor, despite his having been out of the ring for 14 months.

“I didn’t miss nearly no time in the gym Had I been injured, had my leg been broke or my hand, and I wasn’t able to work out in the gym, then I would expect some ring rust,” said Peterson.

“But I was in the gym for the whole 14 months. So at the end of the day, you should should see a better Lamont Peterson rather than a ring-rusted Lamont Peterson.”

In addition, although he admires Holt, Peterson said he will not hold back once they are in the ring.

“As far as losing my edge, nah, that can’t happen. If I decided to fight my brother, then I wouldn’t lose my edge either,” said Peterson, referring to his younger sibling, standout lightweight Anthony Peterson.

“Even though that will not happen, but if we was to get in there, I’m going after him. That’s going to be the same way right here, and nothing’s going to change.”

Below, RingTV.com polled 17 boxing experts to see if Peterson is on target.

Holt’s only chance is to catch Peterson with his cracking power. If he doesn’t, Peterson should be able to outbox Holt on his way to a comfortable decision win.

But he’ll have to survive some rocky moments and perhaps pick himself up off the canvas as he’s had to do against other opponents who had more athletic talent (Tim Bradley, Victor Ortiz, Amir Khan).

Holt will be dangerous from start to finish, but Peterson’s stiff jab, careful pressure, body punching and greater work-rate will enable him to retain his IBF belt.

I think Peterson will shake off his rust in the early rounds, take it to Holt in the middle rounds and take over the fight down the stretch.