Alvarez is as focused, hard working as ever going into Lopez fight 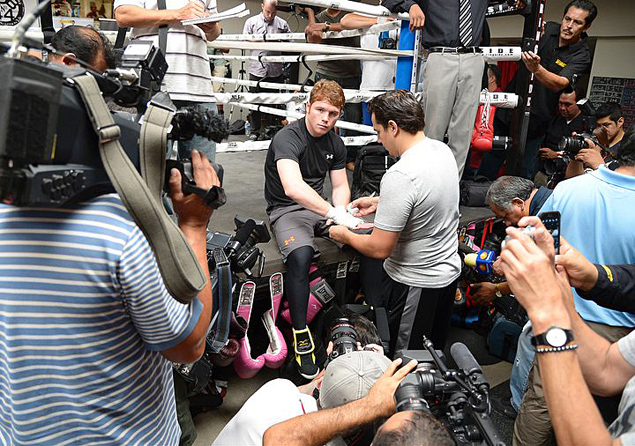 SANTA MONICA, Calif. – The gym Saul Alvarez chose to train for his Sept. 15 fight against Josesito Lopez is not a typical boxing gym, especially for a budding young star making a title defense against hardnosed potential spoiler.

TSB No. 44 is a small, clean, air-conditioned gym that caters to upscale clientele. The partners of TSB (which stands for Tempered Steel Boxing – 44 is the lucky number of the private club’s manager) include some movie industry types, such as actor/director Peter Berg, who was on hand to watch Alvarez’s recent media day workout.

Is “Canelo” going soft or “Hollywood” before facing Lopez in their Showtime-televised main event from the MGM Grand in Las Vegas?

Definitely not, according to two former champs connected to the popular WBC 154-pound beltholder. Former junior featherweight and featherweight titleholder Oscar Larios and Oscar De La Hoya, president of Golden Boy Promotions, which represents Alvarez, say the 22-year-old Mexican standout is training as hard as he always does.

“It’s true that where a fighter trains can play a role in how well he prepares for a fight, but when a fighter wants to be a champion – or he wants to remain a champion, as Canelo does – it doesn’t matter where he trains as long as he’s dedicated,” said Larios, who has been a part of Alvarez’s training team since before the Guadalajara native turned pro.

“Canelo has always been disciplined. He has other ingredients that a fighter needs to succeed – he’s strong, he’s got quick hands, and he’s smart – but the dedication to the sport is the No. 1 thing. Canelo understands that he has to be 100 percent ready for every fight.” 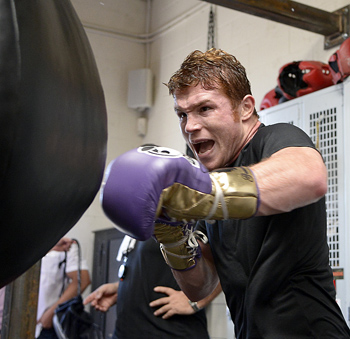 “I’ll be ready on Sept. 15,” he told RingTV through translator Ramiro Gonzalez. “Right now I’m 80-85 percent there. Most of the hard work is done. Now we’re just fine tuning our gameplan.

“The most important thing for me is not to get cocky. That’s my biggest challenge with this fight. I can’t be overconfident.”

Alvarez believes Victor Ortiz made that mistake and paid the price for it. Lopez, as most fans know, gave Ortiz – who was already scheduled to challenge Alvarez on Sept. 15 – a hell of a fight en route to breaking the heavily favored southpaw’s jaw and winning by ninth-round TKO.

“He opened the door to this opportunity,” Alvarez said of Lopez (29-4, 17 KOs). “He shocked the world, especially the boxing media, so he’s a deserving challenger in my opinion.”

“I’ve come by the gym to watch him during this camp and he looks in tremendous shape but he’s also focused, which is the most important aspect of his preparation,” he said.

“Focus is crucial against an opponent like Josesito Lopez. I know what it’s like to look ahead and to think about bigger fights. I know how detrimental that can be.”

De La Hoya almost lost to a then-unheralded Felix Sturm before challenging Bernard Hopkins in a mega-fight in 2004. The Golden Boy had already signed to fight the middleweight champ before he stepped into the ring with the unknown WBO beltholder from Germany and many observers believe Sturm deserved to win the controversial close decision than went to De La Hoya.

After the fight, an embarrassed (and out-of-shape) De La Hoya admitted that he overlooked Sturm and didn’t as hard as he should have because he was thinking about Hopkins. He doesn’t want Alvarez to make the same mistake with Lopez by looking forward to potential future super fights with Floyd Mayweather and Miguel Cotto.

“He knows the Cottos and Mayweathers will come,” said De La Hoya. “He knows we have a long-term plan for him. He knows I want to see him as a multi-division champ 10 years from now. All he has to do now is concentrate on Lopez.”

Francisco Santana, a tough junior middleweight who is in his fifth week of sparring with Alvarez, says Canelo is 100 percent focused on Lopez and ready for the 6-foot boxer-slugger.

“This is one of the most professional camps I’ve ever been in,” said Santana (13-3-1, 6 KOs), who has sparred with the likes of Ortiz and Amir Khan. “Everybody here – Alvarez, his trainers, Don Chepo and Eddy Reynoso, Oscar Larios and us sparring partners – are here to work and learn from each other.

“I’ve learned a lot by working with Alvarez because he’s a complete fighter. He’s got a good jab, good movement and he’s a great counter puncher, but what impresses me the most is his composure. He’s very mature for a 22 year old.”

Alvarez’s composure and well-rounded ability was on display during a five-round sparring session (with four-minute rounds and 30-second rest periods) with Santana and Abraham Lopez.

Alvarez worked his jab and sneaky left uppercuts while allowing Santana to stalk forward in the first round. He let 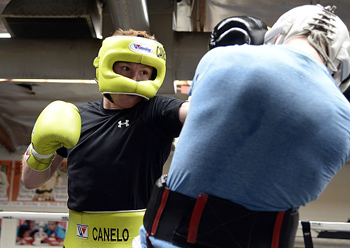 his hands go in controlled bursts while periodically moving about the ring.

In the second round, Alvarez began to mix his punches up to the body and head, adding right hands and hooks to the ribcage as he willingly went to the ropes. Santana let his hands go more but had a difficult time connecting on Alvarez, who utilized a lot of head- and upper-body movement throughout the session.

In the third round, the 26-year-old Santa Barbra native stepped up his pressure and finally landed some decent shots, including a hard left hook a few right crosses. Alvarez isn’t untouchable, but it’s not easy to mount a sustained attack on the redhead due to his ability to block punches and his willingness to step away from a heated exchange.

“We don’t go crazy in sparring,” said Santana. “He hurt me with an uppercut the other day. It buckled my legs and knocked my headgear to the side. He immediately backed off to let me get my bearings and fix my headgear. We’re here to work.”

Santana and Lopez put in good work during the media day, giving Alvarez the opportunity to practice many facets of his game.

Lopez (3-1, 1 KO), a 21-year-old welterweight from Oxnard, applied pressure and threw punches in bunches whenever he was in range during the fourth round of sparring. Alvarez kept him honest with his jab and countered well with right hands.

In the fifth round, Alvarez boxed from a southpaw stance as he lured Lopez to the ropes where he slipped punches and retaliated with both hands. Later in the round he backed Lopez up with stiff jabs, hooks to the body and counter crosses.

Larios, who used to spar with a 14-year-old Canelo back in 2005 when he still held the WBC 122-pound title, believes Alvarez’s mix of boxing and power punching will be too much for his opponent on Sept. 15.

“The first few rounds, Lopez will jab and move and Canelo will bob and weave and make him miss,” Larios said through Constantino Garcia. “Canelo will box with him but at the first opportunity to land a hard punch, he’s going to take Lopez out.

Santana also believes Alvarez can score a stoppage but he doesn’t think the fight will be easy.

“I was shocked by what Lopez did to my boy Vic,” he said. “He’s very hungry to succeed and to make a name for himself. People have criticized him for taking this fight because he usually fights at junior welterweight but I don’t blame him.

“He’s going to try to make the most of his opportunity. Alvarez will have to take his time and use that really good jab he’s got. He told me that he’s going to win round by round, so I see him breaking Lopez down gradually. I don’t see it going the distance.”