Casimero’s next defense may be in Philippines

MANILA, Philippines – Manila’s boxing beat reporters gathered Thursday afternoon for a round table Q&A session with IBF junior flyweight titleholder Johnriel Casimero, his first formal get together with Filipino media since gaining full recognition from the IBF just three weeks ago. Yet, as media quizzed his promoter Sammy Gello-ani about the 22-year-old beltholder’s future plans, Casimero quietly sat with white headphones around his neck, playing with his iPod.

Casimero (17-2, 10 knockouts), of Ormoc City, Leyte, Philippines, had just arrived back in his home country after a split-decision victory over Pedro Guevara in Mexico last week. 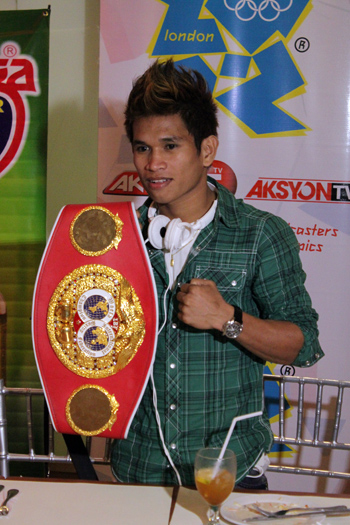 As the headphones creeped closer to Casimero’s ears, the questioning suddenly turned to him as he was asked what he was listening to on his iPod. The shy Casimero replied, “My idol, Justin Bieber.” Even Casimero’s blown-out, highlighted hairdo is in line with the look that the Canadian pop star has become famous for. “In Mexico he was asked ‘Who is he, is he a rapper?'” said Gello-ani. “No, he’s a boxer.”

Casimero’s detachment from the conversation wasn’t necessarily disrespectful, but rather a commentary on his willingness to take any challenge that his handlers see fit. Casimero has etched out a reputation as a road warrior, taking bouts in South Africa, Nicaragua, Mexico and Argentina in search of opportunities. In Argentina, his fight prior to the Guevara match, Casimero’s TKO victory over hometown favorite Luis Lazarte in March touched off a riot.

Asked whom he’d like to fight next, Casimero responded “Kahit sino,” which is Tagalog for “anybody.”

Gello-ani was optimistic that his next bout could be on Casimero’s home soil, either in Manila or the Philippines’ unofficial boxing capital of Cebu. All is contingent upon the economic factors (i.e. sufficient television and sponsorship support) aligning to make it a possibility.

“As long as we are supported by television, we want the fight to be here in the Philippines,” said Gello-ani. “We are trying to avoid fighting abroad because it’s very dangerous. I allowed Casimero to fight Guevara in that schedule because it was a calculated risk. [Casimero’s international promoter] Sampson Lewkowicz and I knew who the opponent was. I knew if he just threw his punches, Casimero won’t lose that fight.

“He’s a new fighter, he’s not yet known by everyone,” admitted Gello-ani, when discussing the difficulty of raising sponsorship money. “[Manny] Pacquiao, you can promote him anywhere, but a new fighter needs more exposure and the fighter needs to show what he can do.”

Gello-ani said Casimero is in an optional defense period for the next six months and wasn’t sure whom they’d meet next. Gello-ani expressed interest in rescheduling a defense against Mexican Sammy Gutierrez (31-8-2, 21 KOs) which had been nixed in May due to a scheduling conflict with a Brian Viloria title defense on the same date, but Gutierrez is no longer ranked by the IBF after losing to Armando Torres (19-9, 13 KOs) in June. Gello-ani also said that Ulises Solis, who held the belt prior to Casimero but had to vacate due to injury, is not in the running because he is no longer ranked.

Gello-ani recognized that Casimero’s uneven performance against Guevara, where he had a difficult time cutting off Guevara’s movement, was indicative of a need to change his training regimen. Gello-ani said that Casimero will likely follow his stablemate and former WBO super flyweight titleholder Marvin Sonsona to train in Oxnard, Calif. with Pablo Sarmiento, trainer of middleweight champion Sergio Martinez.

“There is a mix of nationalities in that camp. Casimero will be getting new techniques and sparring different types of fighters from all over Latin America,” said Gello-ani.

Gello-ani ruled out a unification bout for the meantime with other 108 pound titleholders Kompayak Porpramook (WBC), of Thailand, Roman Gonzalez (WBA), of Nicaragua, or his compatriot Donnie Nietes (WBO).

“We are not ready for that because Casimero promised to defend his title ten times or more,” said Gello-ani. “When you’re talking unification, the WBO champion is also a Filipino. Maybe we can fight with Roman Gonzalez but not now. The other one [Porpramook], when that time comes, the other is good, why not? Presently we are only working to defend his title.”