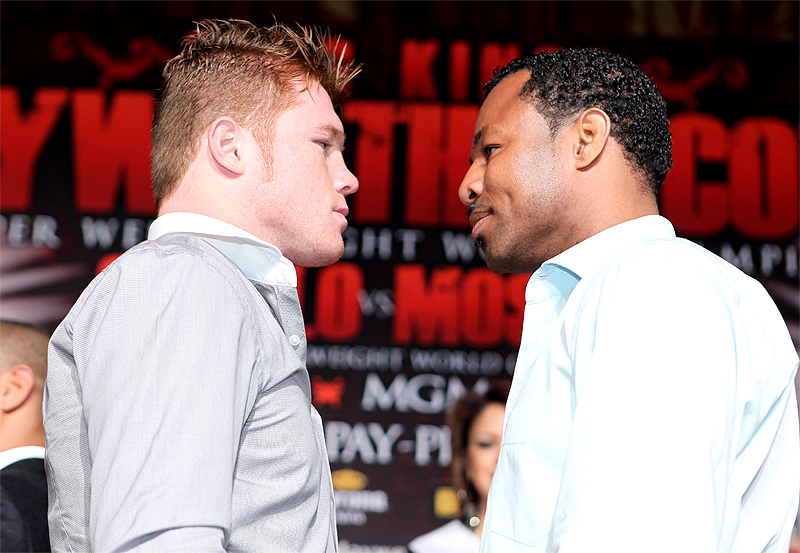 The following is a blog of Shane Mosley’s final training camp in preparation for his May 5 challenge for the WBC junior middleweight belt owned by Saul Alvarez at the MGM Grand in Las Vegas.

The blog was taken from a press release distributed by Golden Boy Promotions, the lead promoter of the HBO Pay Per View-televised event whose featured bout has WBC welterweight titleholder Floyd Mayweather Jr. purusing the WBA junior middleweight crown worn by Miguel Cotto.

Mosley (46-7-1, 39 knockouts) is nearing the end of his career. At the age of 40, he is 0-2-1 in his past three fights, having sandwiched a draw with junior middleweight Sergio Mora in September of 2010 between one-sided unanimous decision losses to Mayweather and WBO welterweight beltholder Manny Pacquiao in May of 2010 and May of last year, respectively.

Question for Mosley: What are some of Alvarez’s strengths as a fighter in your opinion? I’m sure [trainer] Naazim [Richardson] has been watching a lot of tape on Canelo. Are there any interesting tendencies he’s pointed out to you?

“Canelo is a young, talented fighter and will definitely help make things exciting for the fans. There’s a lot I admire about the way he boxes, the way he moves, the way he anticipates hits. But ultimately, I know my experience, as a seasoned fighter will be evident to anyone who watches.

“I think there’s a tendency for everyone to be fascinated in fights where there is an age difference like there is with Canelo and I. We will both be fighting to win, and in the end, I will win. I’d like to think I’ve proved many a naysayer wrong in my career.

“For those who think I won’t be the winner, I say remember I have surprised before. I’m so proud of my career and the fights I have been, and I am very happy that I can add this one to my legacy. I can’t speak for Canelo, but judging where he is in his career, I know how bad he wants to win.

“I am glad we get to fight so everyone can see what a good match looks like. I am immensely looking forward to May 5th and I predict the fans will enjoy it as well. In fact, I think that this will be a fight to remember, knowing the passion that is coming from me, and I’m sure from Canelo.

“As May 5h approaches, let’s remember that boxing is a strong and vibrant community and we are lucky to be a part of it.”