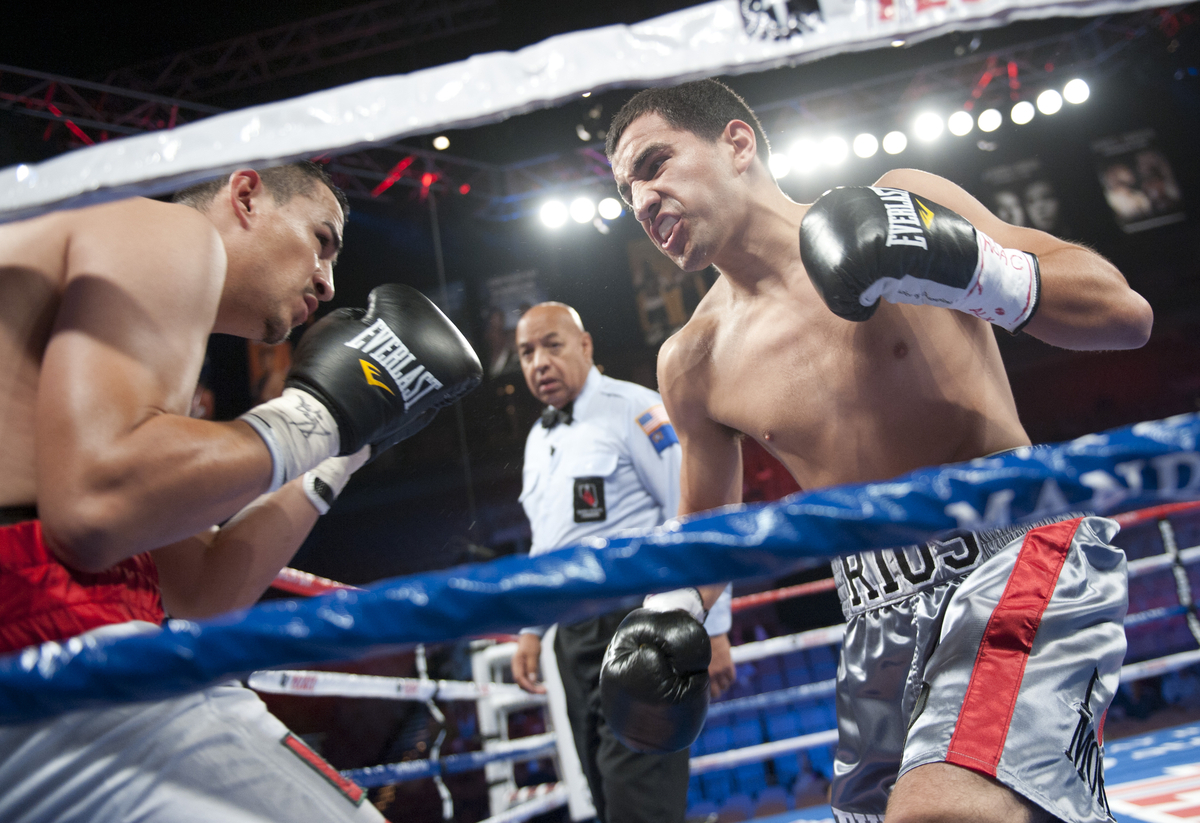 Ronny Rios will fight in his native Orange County for the fourth time in the past year when he faces Guillermo Sanchez in a Solo Boxeo Tecate main event on Telefutura (11:00 p.m. PT/ET) at the Phoenix Club in Anaheim, Calif., on Saturday.

The scheduled eight-round featherweight bout will be the second consecutive time Rios (17-0, 8 knockouts) has headlined at the Phoenix Club. The 22-year-old boxer-puncher from Santa Ana, Calif., scored a fourth-round KO of Jeremy McLaurin at the cozy venue in January.

The choice to have Rios fight close to home is an obvious one for Frank Espinoza, the manager of the undefeated featherweight. Espinosa wants to build Rios’ local following as the young prospect develops into a contender on national television.

The veteran manager believes Rios is progressing well on both fronts. 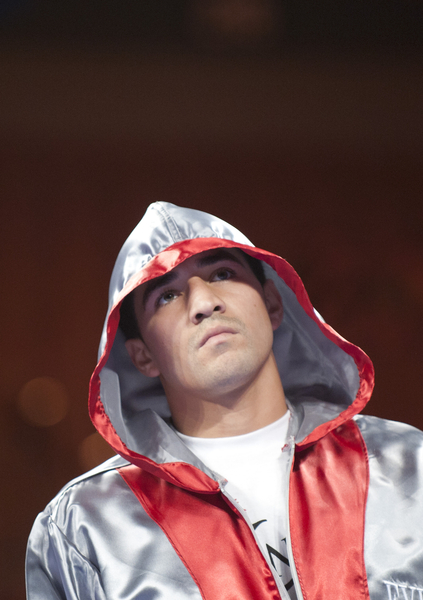 “The Phoenix Club was sold out the last time Ronny fought there, so I’d definitely say that he has a following,” Espinoza said. “It’s not a huge following – the club only seats about 1,000 fans – but it’s growing. Santa Ana hasn’t had many successful fighters, so they’re getting behind Ronny and those hometown fans don’t have to travel too far to see him when he fights in Orange County.

“He sold around 400 tickets, I think about $1,200 worth, for the McLaurin fight. I think he’ll do the same amount or better for Sanchez.”

Espinoza is more impressed with Rios’ ability in the ring than he is with the prospect’s ability to put butts in the seats. He says Rios is at the same level as fellow Santa Ana native Luis Ramos, an undefeated lightweight prospect who made his ShoBox: The New Generation debut in January.

“I think Ronny is ready for ShoBox right now,” Espinoza, who also manages Ramos. “I’ve seen the way he’s been progressing, especially his last fight. I think he’s ready now for the next level. It’s time for him to make a statement on a platform where fans expect a tough fight.”

Rios is no stranger to tough fights. Last year he engaged in two hard-fought eight-round bouts against Georgi Kevlishvili and Roger Gonzalez. Rios had to overcome the adversity of vision problems as well as the stern challenges from his more mature opponents, both of whom he defeated by close unanimous decision.

Rios suffered a cut that bled into his left eye during his fight with Kevlishvili, a hardnosed Russian with a 10-1 record at the time. Against Gonzalez, a skilled and experienced veteran who brought a respectable 27-4 record into their Solo Boxeo main event, he suffered a more serious injury.

“I got hit with a shot that fractured my orbital bone (eye socket) in the fourth round, I believe,” Rios said. “Gonzalez hit me with an open hand. It felt like a thumb, and it didn’t hurt at the time, but I thought I had been cut or maybe even suffered a detached retina because I had triple vision for the rest of the fight.

“That’s why I didn’t move around much in rounds five, six, seven and eight. I could see better when I was in close. I saw three guys when I tried to box from a distance.”

Rios says his vision returned to normal an hour after the fight, but by that time then the pain of the injury also set in.

“It got pretty bad,” Rios said. “It wasn’t like a having a cut or bruise. It was an internal pain. I didn’t want anyone to touch my eye it hurt so bad. We saw a doctor on Monday and a CAT scan showed that I had a minor orbital fracture.”

The injury healed fast, and Rios said everything felt fine during the McLaurin fight a month later. However, he admits McLaurin was a bit of a soft touch.

“We want to see how the eye held up in January – that’s why it was an eight rounder,” Rios said. “This fight (against Sanchez) was supposed to be 10 rounds, but it was dropped to eight. I think I’m ready for 10-round bouts, but we’ll take it one fight at a time and see where I am after Saturday.”

Sanchez (13-5-1, 5 KOs) might be another tough outing for Rios. The 23-year-old Puerto Rican is considered a journeyman because he has lost his last three bouts but he was an unbeaten prospect himself before losing back-to-back fights to Dominic Salcido and Adrien Broner in 2010.

Apart from Broner, who blasted Sanchez in two rounds, the Buffalo, N.Y., resident has given everyone he’s faced a hard fight. Sanchez dropped veteran Edner Cherry in the first round of a close eight-round decision loss in last bout in February. Cherry has been unbeaten since losing a 12-round decision to Timothy Bradley in a 2008 junior welterweight title challenge.

Rios says he hasn’t studied Sanchez’s record too much. He leaves the opponent research to his trainer Hector Lopez, but he says he’s ready for the southpaw spoiler.

“I’m expecting a very tough fight because I know he has nothing to lose,” Rios said. “He has five losses but he’s been in tough. Regardless of his competition, I’m not taking this guy lightly.”

Rios’ main goal on Saturday is to improve on his last performance.

“I’m never totally satisfied with my performance,” he said. “After each fight, I watch the tape and I’ll always see mistakes. It’s what motivates me to keep improving. I could’ve used a little more defense against McLaurin. We worked on that mostly in this camp.”

Espinoza will be watching to see if Rios, who is an aggressive boxer, employs a little more head- and upper-body movement against Sanchez. He’s pretty sure he’ll like what he sees.

“I’m very confident in Ronny,” Espinoza said. “I want to see what I saw in the last fight, but more. I just want to see him progress in each fight. I think he has. I think he’s special.”

Rios signed with Golden Boy Promotions in the spring of 2009, around the same time that three other Espinoza-managed prospects joined up with the Los Angeles-based promotional company. Like Rios, the others – Ramos, Carlos Molina and Antonio Orozco — are former amateur standouts who are unbeaten as pros.

All four graduated from Fight Night Club shows to Telefutura’s Solo Boxeo series in 2010. This year, he’d like to see them all fight on Showtime’s ShoBox, which is dedicated showcasing the sport’s most promising up-and-comers.

“I was talking to Eric Gomez (Golden Boy’s chief matchmaker) about them recently and I told him they’re going to be the new wave,” said Espinoza. “I think by next year, they’ll all be contenders – Ronny, Luis, Antonio, and Carlos – they’re all progressing.”

Molina (16-0-1, 7 KOs), a lightweight from Rosemead, Calif., has looked sharp in his last two outings since stumbling with a draw against journeyman Juan Montiel last August. Molina handled game and nearly 6-foot-tall opponent, Angino Perez, in his last bout on March 17.

Ramos (21-0, 9 KOs), who scored hard-fought decision over Rey Beltran in January, will return against Daniel Attah on the Abner Mares-Eric Morel undercard in El Paso on April 21. The scheduled 10 rounder will be televised on Showtime Extreme before the main event on Showtime.

Orozco (13-0, 9 KOs), a 24-year-old junior welterweight from Garden City, Kansas (yes, the same Midwest town that spawned Brandon Rios and Victor Ortiz), who now resides in San Diego, is scheduled to appear on a May 4thFox Sports Net show in Las Vegas or on the undercard of the May 5 Floyd Mayweather-Miguel Cotto showdown.

Espinoza says the Fox Sports Net show will be headlined by former 122-pound titleholder Daniel Ponce DeLeon (who he recently signed). If Orozco, a rugged but smart boxer-puncher, winds up on the Mayweather-Cotto undercard, he’ll be part of a “Free-view” broadcast that begins about an hour before the HBO Pay Per View show.