Promoter says Pascal “on board” to fight Cloud, who has already signed 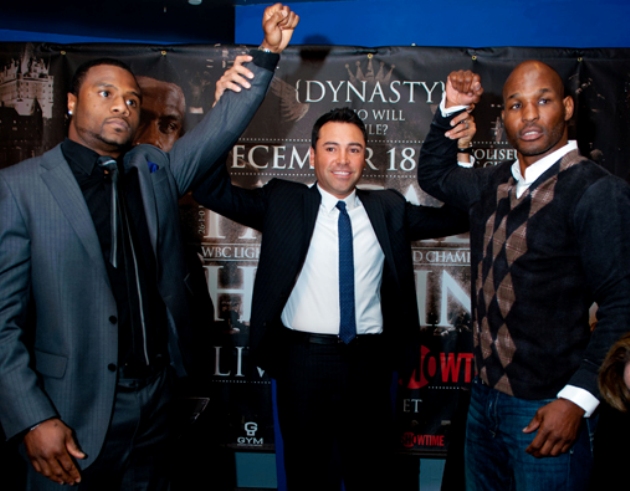 The promoter of former WBC/RING champ Jean Pascal said that the fighter “is on board 100 percent” to challenge IBF light heavyweight beltholder, Tavoris Cloud, who already has signed his intentions to face the Canadian at a date and at a site to be determined later this year on Showtime.

Cloud (24-0, 19 knockouts) told RingTV.com on Friday that he met with his promoter, Don King, at King’s offices in Deerfield Beach, Fla., on Wednesday and “signed my name on the dotted line” to defend his crown against Pascal (26-2-1, 16 KOs).

Pascal want the fight as well, but has not yet signed, said his promoter, Yvon Michel.

King’s Vice President of Public Relations, Alan Hopper, said that his client is being “uncharacteristically tight-lipped” concerning the deal until its completion, but that “Don looks forward to speaking on this issue after the deal is finalized.”

“I haven’t spoken to Don today, but I have an agreement with Don and with Jean, and he will sign whenever the contract will be presented,” said Michel.

“But before that, we need to know the date, the site and finalize the deal with the television. The venue will be decided after we establish the date, but there is no problem. Jean Pascal is 100 percent in for that.”

Cloud is coming off a controversial Showtime-televised title defense against former WBA titleholder Gabriel Campillo (21-4-1, 8 KOs), whom Cloud edged by split-decision in February.

It appears that Cloud will remain cautiously optimistic pending the arrival of Pascal’s signature.

“They say that they’re 100 percent on board, but they haven’t signed, right?” said Pascal. “And they don’t know the date and the site? Well, that’s all good. I did my job so that I could make their job easier.”

RING/WBC champ Bernard Hopkins, who turned 47 in January, dethroned Pascal as WBC beltholder by unanimous decision last May to become the oldest man to win a significant title belt in boxing.

Hopkins-Pascal II was a rematch of their disputed draw in December of 2010, during which Hopkins rose from two early knockdowns.