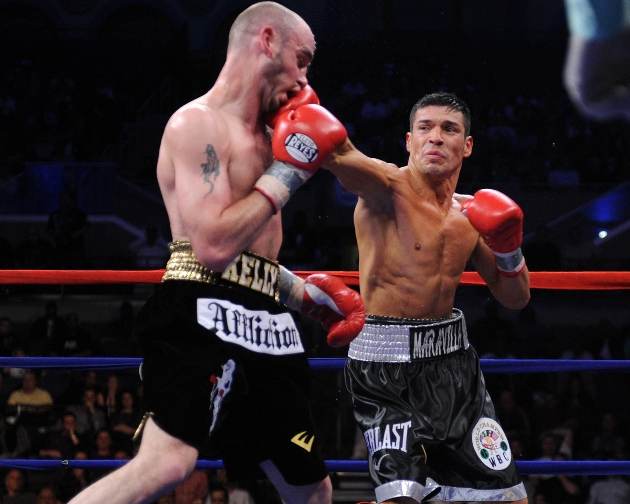 The last time THE RING’s No. 3-rated middleweight Mathew Macklin was in the ring was last June, when the Irishman lost a controversial split-decision to the magazine’s No. 2-rated contender Felix Sturm in the WBA beltholder’s native Germany.

Macklin (28-3, 19 knockouts) will get a second straight shot at glory on Saturday night at New York’s Madison Square Garden on St. Patrick’s Day, when he challenges southpaw Sergio Martinez (48-2-2, 27 KOs), THE RING’s middleweight champion and No. 3 pound-for-pound fighter.

Martinez is coming off an 11th-round knockout of London’s Darren Barker (23-1, 14 KOs) last October during which he was tagged several times by the wily fighter.

Martinez won the undisputed middleweight title with a unanimous decision over Kelly Pavlik in April of 2010 before scoring a second-round knockout of Paul Williams in November of that year in a rematch of their 2009 fight that Williams won by a controversial majority decision.

Martinez was then forced, however, to give up his WBC belt for fighting Sergei Dzinziruk in March on HBO, a bout Martinez won by an eight-round KO.

But during an interview with RingTV.com in December, Macklin displayed confidence going against Martinez.

“Martinez certainly showed some vulnerabilities and he certainly showed that he was hittable. He looked tired. But having said that, he had probably been looking past Barker, and I think that Martinez is certainly better than that,” said Macklin, who is expected to be greeted by an arena packed with Irish fans.

Whether or not the luck of the Irish be on Macklin’s side on Saturday remains to be seen.

RingTV.com sought the opinions of 14 boxing aficionados, the results of which are below.

Matthew Macklin SD 12 Sergio Martinez: Matthew Macklin will be buoyed by his adopted hometown of New York City to go along with all the Irish rooting for their charge on St. Patty’s Day.

Macklin is tough as nails, has a great chin and isn’t afraid to mix it up. Sergio Martinez holds a huge speed advantage, but if Macklin can force his fight on the inside, he can eke out a decision, though it won’t be easy.

If he keeps the same work rate against Martinez, he could cause some problems for the Argentinian in the early rounds. Macklin has the potential to create an upset but I expect the champions power shots to catch up with Macklin late in the fight.

A pressure fighter who hopes to slip once, get inside and unleash hooks, the Irishman is a stationary opponent’s nightmare, but a slick counterpuncher’s dream. Without a jab on his way in, and with hooks being his weapon of choice, Macklin invites open counters from Martinez, who has proven he can do serious damage to middleweights.

If Paul Williams, Kelly Pavlik and a breathing Kermit Cintron struggled to hunt down Sergio, what will a fighter with fewer tools be able to do? That isn’t to say that Macklin couldn’t make for extremely fun affairs with other middleweight titlistsÔÇöand even beat themÔÇöbut the real titleholder is a little out of his league.

Mack The Knife might carve out a few rounds in the fight based on activity and effort, but ultimately, I see him getting chopped apart by the eighth round. Martinez TKO-8

Martinez will score with his jab and neutralize some of Macklin’s hard pressure with lateral movement, but I think the challenger will occasionally get inside and get good work done – especially to the body.

I wouldn’t be shocked if Macklin scored an early knockdown by pushing Martinez off balance while landing something high on the champ’s head. However, I think Martinez’s class and athleticism will show by the middle rounds.

The champ will step up his pressure and punch output — primarily his left cross — over the second half of the bout and Macklin will gamely absorb a lot of punishment. I think Macklin’s stamina and chin will give out somewhere between the ninth and 12th rounds.

Sergio Martinez TKO 11 Matthew Macklin: The 37-year-old Sergio Martinez has to silence talk that there are signs of erosion in his skill. He also has to be wary of a possible trend. For 2012 is beginning to look as if the top of the game is undergoing one of those periodic shuffles.

Ask Juan Manuel Marquez after a rematch loss to Orlando Salido. Martinez also has to put aside hopes of bigger bouts against the Juniors, Floyd Mayweather and Julio Cesar Chavez. If he doesn’t, a counter from tough Matthew Macklin will turn him into the next star to topple.

Martinez throws punches with both hands while moving backwards on agile feet trained on soccer fields. For the incoming Macklin, that means punishment early, fatigue late and defeat in the end.