Sergio Martinez and Sergei Dzinziruk have much in common.

Both boxers are talented southpaws. Both were junior middleweight standouts on the European scene. Both ventured to America in search of greater opportunities.

Martinez relocated from Spain to the U.S. in 2007, a few years before Dzinziruk, an undefeated 154-pound beltholder based in Germany, made the decision to leave his adopted country.

Martinez fought Kermit Cintron, Paul Williams and Kelly Pavlik, whom the Argentine veteran defeated to earn THE RING middleweight title, before Dzinziruk could establish himself in the U.S.

That experience of battling with those top American fighters changed Martinez both physically and mentally. The 36-year-old middleweight champ is bigger, stronger and more tenacious than ever. It’s why he believes he will be the first professional fighter to defeat Dzinziurk when the two meet Saturday in Mashantucket, Conn., on HBO.

Whoa. When did Martinez (46-2-2, 25 knockouts), once a proud practitioner of the Sweet Science, get into the Hurt Business? It wasn’t long ago when Martinez’s style was similar to Dzinziruk‘s. He was more athletic than the Ukrainian and his technique wasn’t as polished as the former amateur standout but he liked to box from a distance and his goal wasn’t to hurt his opponents.

However, getting robbed against Cintron, who was awarded a controversial majority draw when he should have been counted out in the seventh round, and losing the hotly contested first bout with Williams by majority decision taught Martinez the value of bringing his “own judges” to his fights (i.e., scoring knockouts).

Rising to middleweight for the first Williams bout and then challenging Pavlik for the 160-pound title forced Martinez to pack on the muscle necessary to back up his new ring mentality.

His combination of increased strength and aggression produced a shockingly brutal result for Williams, who Martinez knocked out cold with a single left cross in the second round of their rematch last November. It was THE RING’s knockout of the year.

“He’s going to hit harder in this fight than he did in the Williams rematch,” said Cicilio Flores, Martinez’s conditioning coach and the co-owner of the World Crown Sports gym, where the middleweight champ trains. 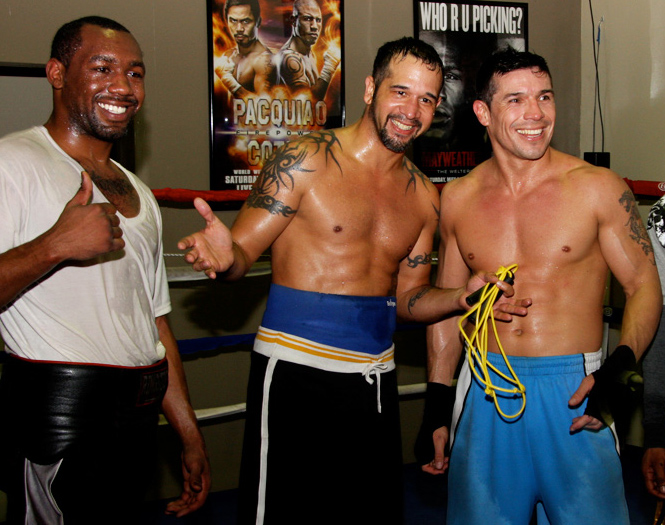 Martinez’s sparring partners, Daniel Santos and Austin Trout, can attest to that statement.

Trout, an undefeated junior middleweight titleholder, who sparred with Martinez before the Williams rematch, says he can tell the champ has more power than he did last year.

“Both Dzinziruk and Martinez are fast, crafty southpaws, but Martinez can punch much harder,” said Santos. “I can tell that Martinez is very strong for a middleweight because I’ve been around 180 pounds for our sparring sessions and he’s able to move me. I can feel his punches.”

Santos and Martinez, who weighed between 170-175 pounds last week, exchanged explosive punches during their sparring sessions. Martinez usually forced Santos into toe-to-toe exchanges after he pressed the Puerto Rican veteran along the ropes.

Against Trout, Martinez’s goal was to get close and outwork the younger man on the inside.

Martinez is obviously practicing to be more aggressive in the ring, but fans should not expect to see a pure slugger against Dzinziruk on Saturday.

Martinez made good use of feints, as well as in-and-out footwork, as he gradually backed Santos into corners. He occasionally dropped his hands to goad his sparring partners into leading with punches that he could counter, but he never abandoned his head- and upper-body movement. 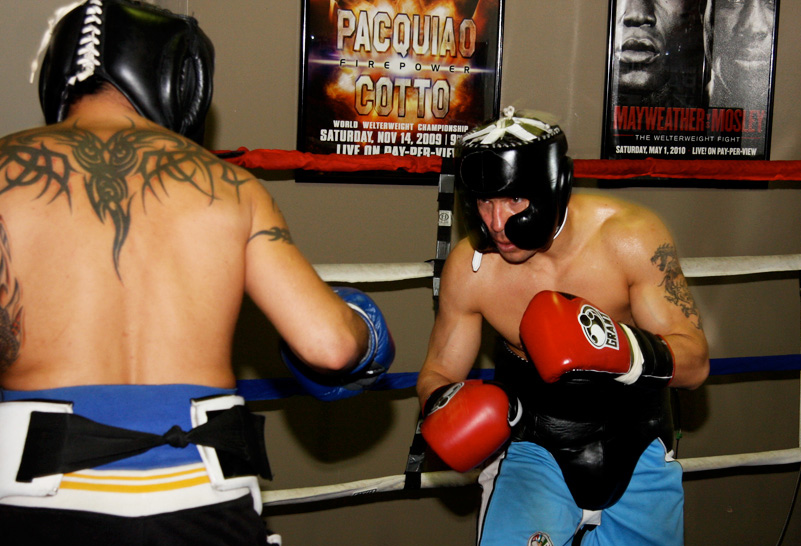 “Martinez is what I call an engaging boxer,” Trout said. “He’s constantly walking you down, but he’s giving you angles and feints as he does it. He’s changing levels (of height) while he presses you.

“You can say he’s a boxer-puncher or a smart pressure fighter. Call him what you want, but he’s a damn good fighter.”

So is Dzinziruk (37-0, 23 KOs). Martinez knows that, but most American fight fans don’t, which is one reason some boxing writers have panned Saturday’s fight.

Dzinziruk is a pure boxer-technician who is so effective with his jab that he can beat most opponents using mainly the basic punch. His skill is impressive but it’s not terribly entertaining, which is the other reason fight scribes have criticized HBO’s decision to match the unknown Ukrainian with the exciting middleweight champ.

Martinez, to his credit, is motivated to defend his title against Dzinziruk.

“I’ve been aware of Dzinziruk for the last six or seven years, going back to when I was living in Spain,” Martinez said. “There was always a chance that we could fight because he was down in Germany, and I was a ranked junior middleweight.”

Martinez is glad he’s fighting Dzinziruk now in the U.S. instead of years ago in Europe. The stakes are higher, the money is better, and the middleweight champ believes he’s at his peak as a fighter.

“Dzinziruk’s a very intelligent fighter,” Martinez said. “He’s going to do everything he can to beat me on March 12, but my advantage is the level of competition I’ve fought. I’ve faced guys like Cintron, Williams and Pavlik. He doesn’t have that experience.

“I’m confident that I’m the superior fighter, but I’m really excited about this fight. Dzinziruk is not well known, but he’s a great champ, and it’s going to be a great fight.”