Donaire finally gets his big opportunity 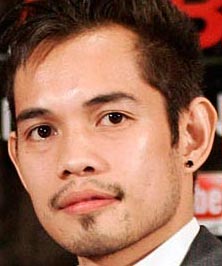 Nonito Donaire, pictured with trainer Robert Garcia on Tuesday at a news conference, is happy and confident going into his showdown with Fernando Montiel on Feb. 19. Photo / Chris Farina-Top Rank

LOS ANGELES – This is what Nonito Donaire has been waiting for.

The former flyweight titleholder, now a full-time bantamweight, has fought professionally since 2001 but had yet to secure a fight that would provide him the opportunity to prove beyond doubt that he belongs on pound-for-pound lists. His date with Fernando Montiel on Feb. 19 on HBO is that fight.

Donaire and Montiel are both on THE RING pound-for-pound and bantamweight lists. The winner will make a huge statement.

“I’ve waited for this match a long time,” Donaire said at a news conference Tuesday in downtown Los Angeles. “I’m actually going to fight the best in the division. No doubt that Montiel is the best right now. This is my chance to show people that I’m elite.

“ÔÇª I’ve encountered so many hurdles, so many heartaches. I guess being persistent has paid off.”

Donaire’s frustrations have been well documented. Friction with his father-trainer that led to their split professionally and problems getting big fights are among issues that almost drove him from the sport. He “quit” more than once, he said, only to return each time. He said he committed himself 100 percent only after signing with manager Cameron Dunkin in 2005 but had his doubts even after that.

And his stunning one-punch knockout of Vic Darchinyan in 2007 earned him recognition as a rising young star but, perhaps in part because he scared potential opponents off, he hasn’t had a truly big fight since. He and Montiel also decided to forsake Showtime’s bantamweight tournament to fight each other.

Then, last year, everything came together. Promoter Bob Arum, who handles both Donaire and Montiel, arranged the 118-pound showdown and HBO agreed to broadcast it even though small fighters aren’t often featured on the premium cable network.

All Donaire had to do was beat former titleholder Wladimir Sidorenko on Dec. 4, which on paper wasn’t a gimmie. However, Donaire overwhelmed the accomplished Russian with his unusual size and speed — which have given so many opponents trouble — en route to a fourth-round knockout and one of the most-impressive performances of 2010.

And here we are: Donaire vs. Montiel.

“This is the fight that will change everything,” Dunkin said. “In this fight you see a difference in the money Nonito will make [$375,000]. He always made good money but this is a step up. And not only financially but also pound for pound. Some people have put him on their pound-for-pound lists. Others say, ‘Who has he ever beat [beyond Darchinyan]?’

“That’s why this fight is different. He can make a big statement here and in the Philippines by beating Montiel.”

Donaire has repeatedly praised Montiel, citing his five titles in three weight classes and the power that helped him win them, but he has no doubts about the result on Feb. 19. He even anticipates an early knockout.

He predicted a fifth-round KO of Sidorenko. And, if things go as he expects them to, he believes the fans watching in Las Vegas and on television will see a similar outcome against Montiel.

“I know Sidorenko had never been down or stopped but I predicted a fifth-round knockout,” Donaire said. “I expected him to be strong but I figured that with my motivation, with the way I was working hard, my power, my speed was there, as long as I did my best, I felt that I could knock Sidorenko out. And I feel the same way about Montiel. As long as I do my best, I think that I can knock him out.

“ÔÇª As long as he gives me the opportunity to figure him out early, then you will see a similar outcome. He will throw his power punches but I think my speed will get there before his power punches.”

If that happens, big things could lie ahead.

First, his pay scale should continue to rise. His minimum payday per fight, according to Dunkin, will be $550,000. And Dunkin said seven figures could be around the corner “if he continues to win.” Second, with the financial backing of HBO, prospective opponents who might’ve avoided Donaire in the past will be more likely to fight him. And, third, he has quality prospective opponents from 118 pounds to 122 and ultimately beyond. The winner of the bantamweight tournament (Abner Mares or Joseph Agbeko), Wilfredo Vazquez Jr. at junior featherweight and possibly Juan Manuel Lopez in a major featherweight showdown are among the possibilities.

Yes, there will be a lot at stake on Feb. 19. And Donaire couldn't be happier.

“It's a blessing, everything I have,” he said. “… I'm happy with my life and the way things are going. I want to just stay who I am and appreciate everyone and everything that has been given to me.”