Lopez ready for his breakthrough fight 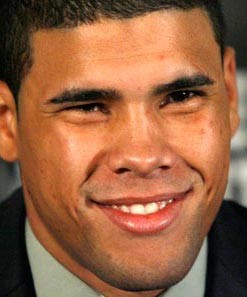 LOS ANGELES — Juan Manuel “JuanMa” Lopez has everything a Puerto Rican fighter needs to become the next idol of the boxing-proud island’s loyal fans.

Lopez (29-0, 26 knockouts), a 2004 Olympian, is an exciting boxer-puncher with textbook technique and God-given talent that includes bona fide KO power in both hands. The former 122-pound titlist and current featherweight beltholder also occupies a division packed with potential rivals.

However, before Lopez engages in legend-building showdowns against Chris John, Yuriorkis Gamboa, and Celestino Caballero, he has to make a statement against Rafael Marquez.

Lopez, who faces the Mexican veteran Saturday in Las Vegas on Showtime, is the first to admit it.

“This is most important fight of my career without a doubt,” Lopez told RingTV.com on Monday after a media day workout at the Fortune Gym in Hollywood, Calif. “This is a fight I always wanted. Marquez and Israel Vazquez were the best at junior featherweight, where I used to fight, and I always wanted to test myself against the best. I still think Marquez is one of the best.”

Marquez (39-5, 35 KOs), a hard-punching former bantamweight titleholder and junior featherweight champ, is coming off a dominating third-round stoppage of Israel Vazquez in May.

The easy TKO of his shopworn rival evened up their four-bout series at 2-2. But it's the first three bouts, instant-classic slugfests that resulted in THE RING’s Fight of the Year for 2007 and 2008 and earned the two Mexican fighters a degree of fame outside of their home country, that Lopez has yet to equal.

Lopez, who is coming off a second-round stoppage of Bernabe Concepcion in July, can draw 10,000 in Puerto Rico but not in the continental U.S.

His promoters, Top Rank, Inc., and PR Best Promotions, are aware of this. That's why the venue for Saturday’s fight, the MGM Grand’s Garden Arena, has been scaled back to 8,500 seats.

“We’ve closed off the upper deck of the arena,” said Todd duBoef, president of Top Rank. “We’re expecting a little over 7,000 on Saturday, which is good for JuanMa’s first headliner in Las Vegas.”

The fight, which Showtime will air at 10 p.m. ET (live) and 10 p.m. PT (delayed), is a good matchup and moderately high profile, but it’s not a major bout. DuBoef describes it as “breakthrough” fight for Lopez if he wins. It’s the fight that could make Lopez a star outside of Puerto Rico as well as on the island.

“JuanMa’s got a name in Puerto Rico and in New York City, but he still has to establish himself in other markets,” duBoef said. “That’s why Marquez is such an important opponent for him. Marquez makes for a good a fight and a storyline. It’s Puerto Rico versus Mexico, and it’s a cross-roads match, a young professional that everyone is excited about against a savvy veteran who has earned the sport’s respect.”

Every star in boxing had to win a fight like this one before they became attractions, according to duBoef.

“People forget that (Sugar Ray) Leonard-(Wilfred) Benitez, a fight which had (Marvin) Hagler-(Vito) Antuofermo as its co-feature, was fought at the Pavilion at Caesars Palace, a place that only held about 4,500,” duBoef said. “The Mandalay Bay’s arena was cut in half for the first (Erik) Morales-(Marco Antonio) Barrera fight. There was a little more than 6,000 seats for that great fight.

“But that was the level they were at back then. Just like Leonard versus Benitez or Hagler versus Antuofermo, Morales and Barrera were just on the cusp of becoming stars. That fight was their breakthrough fight. Juan’s breakthrough fight is against Marquez.”

Lopez, who looked sharp shadow boxing and quite powerful while working mitts and the heavy bag, agrees that the Marquez fight is a pivotal bout in his career.

“Without a doubt this is the fight I need to give my career that boost to the next level,” Lopez told RingTV.com through interpreter Ricardo Jimenez. “I’ve got to beat Marquez, and then we’ll see some great fights. This is the beginning.”

Knockout predictions: Both Lopez and Marquez say fans can expect an action fight that will not go the distance.

Most fans and media agree with the fighters’ predictions, and they favor the younger, fresher Lopez to score the KO of the 35-year-old veteran.

Lopez agrees, of course, but he doesn’t think it will come easy.

“People say Marquez is done, but I don’t believe that for a second,” he said. “I know he’ll be at his best, and I know it’s going to be a great fight, but I expect to beat him.”

Lopez said he plans to wear Marquez down and stop him late.

Marquez also expects an extended battle, provided that Lopez gives him the respect he feels he’s due.

“I anticipate a long, tough fight that I will win by knockout,” he told the media at Monday’s workout at Fortune Gym, “but if he wants to stand and trade with me it will be a short night.”

The rivalry: While Lopez and Marquez vowed not to allow the storied rivalry between Mexican and Puerto Rican boxers to add pressure to their fight or effect their focus, both fighters said they are acutely aware of it going into Saturday’s bout.

Sanchez stopped Gomez, who had an incredible record of 32-0-1 with 32 knockouts, in the eighth round of their 1981 showdown in Las Vegas.

Gomez stopped Zarate, 52-0 with 51 knockouts at the time, in the fifth round of their 1978 clash in Hato Rey, Puerto Rico.

Secret weapon: Marquez said his keys to victory will be his conditioning and his new trainer, Daniel Zaragoza, an accomplished southpaw who was inducted into the International Boxing Hall of Fame in 2004.

Apart from his two victories against Vazquez, Marquez’s most impressive wins have come against two talented American southpaws — Mark “Too Sharp” Johnson and Tim Austin. So obviously, his former trainer, Nacho Beristain, who guided Zaragoza to a bantamweight title and three 122-pound belts, taught him how to fight lefthanders.

However, Marquez says he has learned specific methods of dealing with southpaws from Zaragoza that will serve him well against Lopez, an aggressive left-handed boxer-puncher.

“Zaragoza is very meticulous in his training,” Marquez said. “As a lefthander, he knows how southpaws fight, he knows all their tricks, and he’s worked with me on how to shut them down.

“We work very well together. I’ve known him all my life. I even sparred with him when I was a young pro, and he was still a champ.”

Quick vacation: Should Lopez prove the odds makers correct by beating Marquez, Top Rank hopes to have the budding attraction back in the ring by late February, according to duBoef.

“If he wins, and the fight is not too grueling, he’ll take off the rest of the month, enjoy Christmas and then get back into the gym in January,” said duBoef. “Like most fighters, he wants to stay busy, and there are the type of opponents for him at featherweight that will make Showtime or HBO welcome him back on their networks.”

He was asked whether Top Rank planned to eventually match its featherweight up-and-comers, such as Mikey Garcia and Guillermo Rigondeaux, against Lopez.

“Eventually, yes, those fights can happen, but they have to progress a little more and get more exposure first,” he said. “Garcia and Rigondeaux are at one level, and JuanMa is at another.”

When asked whether Lopez is ready to replace Miguel Cotto as Puerto Rico’s most-popular fighter, duBoef reminded the media that Lopez is still a notch or two below the current junior middleweight titleholder.

“Lopez has a lot going for him, but he’s still a baby compared to Cotto,” he said. “(Top Rank) has had 10 great years with Cotto, and I think we’ve got a few more before he’s through with boxing. Cotto will have at least one major fight next year, so I think Lopez is the heir apparent to doing our annual fight at Madison Square Garden on the eve of the Puerto Rican Day Parade. But that day hasn’t come yet.”