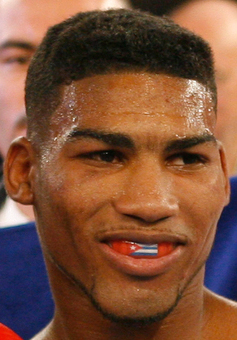 JOHN O’DONNELL vs. TERRANCE CAUTHEN
Rounds / weight class: 12 rounds / junior welterweights
Location: London
Television: Showtime (delayed)
The backdrop: O’Donnell (23-1, 11 KOs) has won eight in a row since he was stopped in two rounds by journeyman Christian Solano in 2007, after which the left-handed prospect from London took a year off of boxing. O’Donnell isn’t known as a big puncher but stopped six of those eight opponents. Cauthen (35-6, 9 KOs), a good boxer with no power, won a bronze medal in the 1996 Olympics but is still looking for his first title shot at 34. The Trenton, N.J., product has won two straight but is 3-3 in his last six fights, which means he was brought in as a stepping stone for O’Donnell.
Also fighting: Tyson Fury vs. Rich Power, eight rounds, heavyweights.
Rating the card: C+. O’Donnell is a nice, well-schooled prospect. Cauthen probably will lose a decision but is good enough to give his foe some work. Fury (11-0, 9 KOs) is 6-foot-7 (201cm).

CHRISTOPHER MARTIN VS. JOSE LUIS ARAIZA
Rounds / weight class: Eight rounds / junior featherweights
Location: San Diego
Television: Telefutura
The backdrop: Martin (19-0-2, 5 KOs) is coming off the biggest victory of his career, a split-decision victory over then-unbeaten prospect Chris Avalos last month. The 24-year-old San Diego native is facing a more-experienced opponent in Araiza (29-2, 20 KOs), although the Mexican is coming off a second-round knockout loss to Williams Gonzalez in Miami and has faced primarily journeymen. Araiza had fought exclusively in Mexico until his last two fights.
Also fighting: Enrique Grajeda vs. Alan Sanchez, eight rounds, welterweights.
Rating the card: C. Martin is a good boxer and Araiza apparently has good power, which could make for an interesting matchup. Grajeda (10-0, 7 KOs), from Chihuahua, Mexico, has a solid amateur background. He could be one to watch.

ERIK MORALES vs. WILLIE LIMOND
Rounds / weight class: 12 rounds / welterweights
Location: Mexico City
Television: Integrated Sports PPV
The backdrop: Morales (49-6, 34 KOs) continues his comeback against a capable, but-lighting punching Scot. The six-time titleholder from Tijuana took 2¾ years off after losing four consecutive fights (and five out of six), which seemed to end his remarkable career. However, he couldn’t stay away. He returned in March to outpoint former lightweight contender Jose Alfaro in a 12-round welterweight bout and has his sights set on more big fights and big paydays at 34. This is a chance for Limond (33-2, 8 KOs) to notch an eye-catching victory. He has won five in a row since he was outclassed and stopped in eight rounds by Amir Khan in 2007, one of only two times he has fought outside Scotland. He probably can’t hurt Morales but might box well enough to give the aging Mexican some trouble.
Also fighting: Edgar Sosa vs. Ryan Bito, 12 rounds, flyweights.
Rating the card: B. Morales was always fun to watch. That hasn’t changed even if his comeback is ill-advised. And Limond, a fan favorite in his home country, is a live opponent.

WLADIMIR KLITSCHKO vs. SAM PETER
Rounds / weight class: 12 rounds / heavyweights
Location: Frankfurt, Germany
Television: ESPN3.com (live); ESPN (delayed)
The backdrop: Klitschko (54-3, 48 KOs) was supposed to fight Alexander Povetkin, who decided this whole thing was a bad idea. Instead, he turned to old foe Peter. The result probably would’ve been the same either way. THE RING champion doesn’t please all fans with his cautious style but he has been on a dominating run the past five-plus years, having won 12 in a row (eight by knockout). He survived three knockdowns to easily outpoint Peter in their first meeting. Since then, Klitschko has become more effective and Peter (34-3, 27 KOs) seems to have declined. The Nigerian rebounded from back-to-back losses to Vitali Klitschko and Eddie Chambers to win three consecutive fights but his victims were journeymen. He has trimmed down, however, which should make him quicker than he was in his setbacks. And his power adds an intriguing element to an otherwise eye-rolling matchup.
Also fighting: Jonathon Banks vs. Saul Montana, 12 rounds, heavyweights.
Rating the card: B-. Klitschko is a must-see fighter even if he takes few risks in part because he’s the top-rated heavyweight on the planet and in part because we never know whether he’ll revert to the fighter who struggled mid-career.

YURIORKIS GAMBOA vs. ORLANDO SALIDO
Rounds / weight class: 12 rounds / featherweights
Location: Las Vegas, Nevada
Television: HBO
The backdrop: Gamboa (18-0, 15 KOs) has become one of the most-exciting fighters in the world and a true star in the making. He’s an excellent boxer but has a fighter’s instincts, meaning he’ll take risks to score a knockout rather than settle for a decision victory. Jonathan Barros survived 12 rounds with Gamboa in March, ending Gamboa’s streak of KOs at seven. Perseverance has paid off for Salido (34-10-2, 22 KOs). The well-rounded Mexican fighter lost to Juan Manuel Marquez in his first title shot; outpointed titleholder Robert Guerrero but then reportedly tested positive for steroids, thus making the result no-contest; and lost a split decision to Cristobal Cruz in a third title fight. He finally won a belt when he easily outpointed Cruz in a rematch in May.
Also fighting: Anthony Peterson vs. Brandon Rios, 12 rounds, lightweight title eliminator.
Rating the card: A-. Great card. Gamboa is the real deal but might take too many risks for his own good, particularly against a fighter as good as Salido. We’ll see how good Gamboa really is in this fight. The Peterson-Rios fight is a classic boxer vs. puncher matchup. Rios is one of the most-exciting fighters in the world.