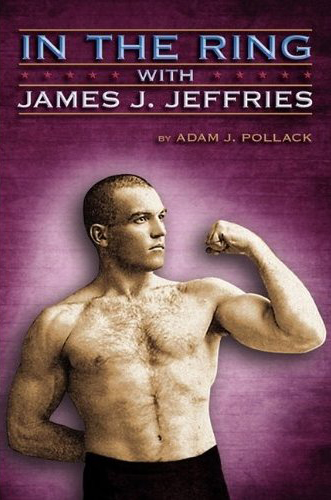 Jack Dempsey defended the heavyweight championship of the world against Tommy Gibbons on July 4, 1923 in Shelby, Mont. Dempsey-Gibbons is the only championship bout that’s remembered more for the site than the fight itself. Shelby’s Folly by Jason Kelly explains why.

Shelby was one of the most improbable and ill-considered venues ever to host a major championship fight. As Kelly notes, “Shelby consisted of a few commercial buildings, some homes, and a train depot; all visible with hardly a turn of the head. Beyond that, Montana’s high plains loomed, an earthen barrier barren of civilization. If there was a middle of nowhere, this was it. They had no arena, no transportation infrastructure, no restaurants, and no hotel rooms to accommodate even a fraction of the crowd a heavyweight championship fight would attract.”

The promotional venture began as a publicity stunt orchestrated by civic leaders who wanted to draw attention to Shelby and raise local real estate prices. They had no intention of actually hosting a fight. Then they got caught up in the flow of events that led to financial disaster.

The promotion was doomed from the start. Nothing prepares one for the business of boxing except the business of boxing. The fight organizers, many of whom were established businessmen, knew nothing about the boxing business. The regional economy was fragile to begin with, and their bumbling made it worse. Shortly after the bout was contested, three local banks whose presidents had been involved with the promotion shut down.

Kelly writes well. And he researches well, which makes his writing even better. Shelby’s Folly has vivid portraits of idiots and scoundrels plus a solid recounting of the fight itself.

To most people, Tommy Gibbons is just a line in boxing’s record book. But in Kelly’s hands, he comes alive as someone we want to know. By contrast, “Doc” Kearns (Dempsey’s manager) is fun to read about, but decent people might not have wanted to spend time in his presence. Kelly describes Kearns as “a symbol of boxing excess and ethical flexibility ÔÇª as coldly persistent as a glacier and even more slippery.”

“Boxing is a business,” Kearns said proudly. “And its main stock in trade is the double-cross, the runaround, and the two-face.”

It’s hard to imagine that there’s much worth knowing about Dempsey-Gibbons and Shelby, Mont., that isn’t in Shelby’s Folly.

Lee Groves is a longtime boxing junkie whose articles have appeared on maxboxing.com over the past five years. He currently works as a writer, researcher, and punch-counter for CompuBox. He has tapes and DVDs of 20,000 fights. That means Lee might wind up in the same psychiatric ward as Dan Rafael, who estimates that he has 5,000 tapes and DVDs with “tens of thousands of fights.”

(The reference to the psychiatric ward is made lovingly).

Tales from the Vault is 720 pages of fight reports. That might sound grim, but it’s not. Groves’s mission, in his words, is to “enshrine one hundred of boxing’s greatest underrated and forgotten classics.”

Each fight is treated as a stand-alone segment, offering the history of the fighters and a blow-by-blow description of the bout. CompuBox compiled contemporaneous punch-stats for 23 of the 100 fights included in the book. Groves has analyzed tapes and used the CompuBox computer program to compile punch-stats for the other 77.

I didn’t read Tales from the Vault straight through. I doubt that many people will. I did look down the index and read Groves’s recap of two enthralling club fights that I remembered attending at the old Felt Forum at Madison Square Garden in New York City: Lenny LaPagla vs. Art Jimmerson on July 14, 1988, and Leland Hardy vs. Ike Padilla on March 30, 1989.

Groves’s recitation of each fight brought back memories and faithfully recorded the action. I shall read more of the book.

Tales from the Vault is a worthwhile reference guide. It also has an insightful foreword by Steve Farhood. Explaining his own passion for the sport, Farhood quotes British historian Arnold Toynbee, who wrote, “The supreme accomplishment is to blur the lines between work and play.” Then, speaking for many of us in the sweet science, Steve adds, “Whether you fight, write, promote, manage, train, or whatever; boxing takes hold of you and never lets go.”

Most boxing fans are only vaguely aware of Jem Mace. His name is mentioned with James Figg, Daniel Mendoza, Tom Cribb and Tom Sayers as being among the better bare knuckle champions under the London Prize Ring Rules. A century after his death, Mace is also known for having employed a “scientific” approach to boxing that was advanced for its time.

Master of the Ring by Graham Gordon is a biography of Mace, whose life (1831-1910) spanned the evolution of boxing from an outlaw sport to legal combat.

It’s hard to know how many of the stories that Gordon recounts are real and how many are apocryphal. Nonetheless, Master of the Ring is an interesting portrait of Mace and boxing in Mace’s time. Throw in a bevy of wives and mistresses (as Gordon does) and reading the book is akin to stepping into an intriguing world.

Fighters and Writers by John G. Rodwan is a collection of essays that deal largely with the relationship between boxing and writing. “The special thing about boxing stories,” Rodwan notes, is that “there’s always more to them.”

Rodwan has a good ear for the words of others. Some examples:

Carlo Rotella: “There is only one way to get good at fighting. You have to do it a lot.”

Henry Cooper: “You’ve got to want to get out of the environment you’re in. That’s what motivates a fighter.”

Gordon Marino: “It would be reasonable for professional boxers to follow the amateurs and don headgear and more thickly padded gloves. But fight fans will not buy it. That is why some of Leavander Johnson’s blood is on all of our ticket stubs.”

George Chuvalo [on Muhammad Ali vs. George Foreman in Zaire]: “What a Hollywood ending. Have you ever seen anything more Hollywood that that?”

Rodwan also quotes Teddy Atlas, who analogizes the Muhammad Ali Boxing Reform Act passed by Congress to Ali late in his career: “laying on the ropes, doing nothing, a lot of shuffle, not enough punching, too much rope-a-dope.”

But Rodwan’s essays are, in large part, about the work of others. Would that Fighters and Writers contained more quotable material and creative thinking of his own.

As the new millennium began, an Iowa attorney and boxing aficionado named Adam Pollack decided to write biographies of boxing’s early gloved champions. In The Ring with James J. Jeffries is the fourth in that series, following biographies of John L. Sullivan, James J. Corbett and Bob Fitzsimmons.

In the Ring with James J. Jeffries takes readers from Jeffries’ birth to his first retirement in 1905, when he was considered by many to be the greatest fighter of all time. Like Pollack’s previous books, it follows a set formula. After reading thousands of contemporaneous newspaper and magazine articles, the author exhaustively reports on the build-up to each significant fight in his subject’s career and the fight itself. The champion’s personal life is treated in cursory fashion.

I’ve noted in the past that there are times when Pollack’s writing is repetitious. That said; his writing is constantly improving. The narrative flow of each new book is better than the one before.

Here, Jeffries’ 1899 conquest of Bob Fitzsimmons to win the heavyweight crown is particularly well told, as is his successful 1900 title defense against James J. Corbett (the first time a former gloved champion sought to regain the crown).

Pollack is committed to writing biographies of Marvin Hart and Tommy Burns. After that, who knows? Meanwhile, his books are a valuable addition to any serious boxing library and the definitive archive for source material on boxing’s early gloved heavyweight champions.

“Peter Close lost most of his fights. He had just lost for the ninth time in a row and it showed. It was not the longest losing streak in the history of the ring, but it was nothing to brag about. It looked like a child had drawn a pair of cartoon goggles on his face. One eye was black, a general term that always does the trick when talking about damage to an eye, and one was closed. Blood stuck to six dark stitches on his bottom lip. A red tissue dropped from his nose. He was not a bad fighter or father or husband. He was just a bit too brave for his own health. And in professional boxing, that made him stupid. He was a nice guy with a bravery problem.”

“A few hours earlier at the Wembley Conference Centre, Close had been dropped and stopped in three rounds. It was his 43rd defeat in 52 fights. He was a journeyman from the old school. He lost fights for a living and was a necessary and kosher part of the boxing business. Close was an idiot in boxing terms because he still fought like a winner. Lester had tried to talk sense into him countless times and it was a waste. How do you tell a man to forget his pride and to just lose when he still thinks he can win?”

“Lester” is Ray Lester, the cynical protagonist in Steve Bunce’s new novel, The Fixer. The paragraphs above are Bunce’s way of introducing readers to Lester and the underside of professional boxing.

Lester is a one-time boxing writer turned booking agent, promoter’s representative, and adviser to anyone who will pay for his services. Bunce defines him with the observation, “Boxing is a lonely planet for anyone unlucky enough to have a conscience. Ray Lester was not a bad man, but he had his moments.”

The Fixer reads like a William Goldman thriller (think Marathon Man) set in the world of boxing with some refugees from The Godfather thrown in. Much against his will, Lester is sucked into a violent war between two organized crime figures. There are times when the plot is a bit contrived; particularly when Lester (who seems like a savvy guy) ignores his own safety to play the game out. But as one reads on, tension and drama overtake skepticism.

Bunce mixes real-life people and events into his plot in a way that makes the narrative stronger. The scene moves from London to Las Vegas (for Mayweather-Hatton). Referencing the agony that Ricky felt after his loss, the author observes, “It was the type of suffering that only the very best prizefighters ever get to experience. It’s the end of something inside; the end of a life they have been living away from all thoughts of defeat. They believe they will never lose, and the hurt is staggering.”

Then it’s on to Atlantic City, N.J., (for a world-sanctioning body convention), back to London, and finally to Blackpool, England.

Even the bit characters are vividly portrayed. One longtime denizen of the fight game is “an old man living with splendid memories and his own hate. He spent his days in loneliness, making phone calls to people who didn’t really want to speak to him. He liked to state the obvious and imagine he was spreading wisdom.”

At the other end of the spectrum, a Las Vegas hostess has “eyes which she had obviously plucked from a dead Barbie.”

Kudos to Steve Bunce for a good and entertaining novel.