Cintron still battling for his place among elite 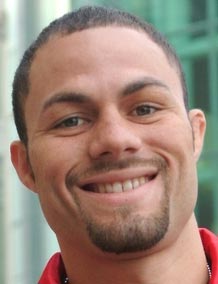 No one has battled harder to become an elite fighter than Kermit Cintron.

The former welterweight titleholder has survived a gauntlet of bruising opponents — including Antonio Margarito (two losses), Sergio Martinez (a draw) and Alfredo Angulo (a victory) — and remains a relevant enough commodity to fight on HBO this Saturday.

And if he can beat another brute in Paul Williams, THE RING magazine’s No. 7 fighter pound for pound, he’ll likely become a major player at 154 pounds.

“If Kermit wins this fight, he establishes himself as one of the elite fighters in the world,” said Lou DiBella, his promoter. “Then anyone at 147 or 154 is a possibility. ÔÇª It changes his career path. It gives him opportunities he didn’t have previously.”

Cintron (32-2-1, 28 knockouts) has had some opportunities already. He won a version of the 147-pound title when he stopped Mark Suarez in 2006 but then lost it to Margarito by a sixth-round knockout in 2008, his second brutal KO loss to the brawling Mexican.

The setback was a huge blow, an indication that Cintron might be a good boxer with considerable power but not quite good or tough enough to compete with a monster like Margarito was perceived to be at the time. As a result, he went to the back of line among those talented enough to receive big paydays and exposure.

However, when Margarito was caught with hardened pads in his hand wraps before his fight against Shane Mosley, everyone wondered whether Cintron was the victim of foul play and the losses suddenly didn't seem to be as damaging. Cintron hasn’t expressed bitterness — in part because we don’t know whether Margarito used the illegal pads against him — but DiBella is openly critical.

“The second loss to Margarito was a big problem,” said DiBella, referring to the fighter’s marketability. “Kermit’s not a whiner, not a guy who complains. With all due respect, though, Margarito is a cheater — the worst kind of cheater. That documentary about (Luis) Resto and (Billy) Collins ÔÇª take a good look at that. That’s who Margarito is.”

Cintron bounced back by outpointing Lovemore N’Dou seven months after the second Margarito fight and then he moved up to 154 pounds to face then-relatively unknown Martinez in February of last year. The fight ended in a majority draw but most observers thought Martinez should’ve won by knockout in a confusing seventh round, in which the referee appeared to count Cintron out but then ruled he hadn’t.

Again, many questioned Cintron’s future as a top contender. Cintron proved to be a survivor, though. He was an underdog to less-experienced, but unbeaten Angulo only three months after the Martinez fight and fairly easily outboxed the rugged Mexican, salvaging his reputation as an important fighter.

Cintron downplayed the significance of that victory, saying “I think every fight is really important,” but it proved that he has more ability and grit than some believed. Still, he didn’t get as much respect as one might’ve expected. Angulo beat him to a date on HBO, fighting both Harry Joe Yorgey and Joel Julio on the premium network before Cintron was showcased even once.

“It’s frustrating when you beat a guy post to post and the guy gets two easy touches and a lot of money on premium cable,” DiBella said. “ÔÇª You lose 10 out of 12 rounds and you’re brought back as if you won while the guy who won is sitting and waiting. That’s troubling.”

A victory Saturday would alleviate any pain.

Williams (38-1, 27 KOs) doesn’t hold a belt but it doesn’t matter. He is perceived as one of the best fighters in the world, a physical freak who throws a million punches from all sorts of crazy angles. It’s no wonder few want to tangle with him.

Martinez established himself as a budding star by losing a close fight to Williams before going on to dominate Kelly Pavlik. Thus, a victory by Cintron should get him more dates on HBO.

“The whole situation with Angulo getting on HBO ahead of me is what it is,” he said. “I’m not going to cry about it. I know I beat his ass. Right now I feel like a champion. ÔÇª I’m just moving forward in my career. Now I’m looking forward to May 8 against Paul Williams, to putting on a great show.