Enjoy Pacquiao while you can 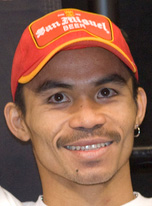 LAS VEGAS — Manny Pacquiao might or might not be among the greatest fighters who ever lived. That judgment will be best made years after he retires.

One thing is certain, though: The roll he is on at the moment is as gripping as any in recent history. And the little Filipino might’ve proved more in his knockout victory over Miguel Cotto on Saturday night than in any other fight in his remarkable career.

Some people might try to diminish his accomplishment at the MGM Grand, suggesting that Cotto was damaged goods after the beating he took from Antonio Margarito last year. Don’t listen to them; it’s not true. Cotto demonstrated clearly that he remains one of the best fighters in the world.

Pacquiao is simply at a different level from everyone else, the only possible exception being Floyd Mayweather Jr.

Two rounds went by before that became clear in front of a buzzing crowd of 16,200. That includes a second round that was as scintillating as any you’ll ever see, the fighters standing toe to toe exchanging hard, fast punches much of the three minutes. For a moment, Cotto was Pacquiao’s equal.

And then Pacquiao put the Puerto Rican star down in the both third and fourth rounds, the second time with a short, vicious left that sent him to all fours and hurt him badly toward the end of the round.

From then on, he landed the fastest combinations I’ve seen in 20 years of covering boxing. They were hard, punishing shots meant to end the fight instantly. And, typically, they came from so many unpredictable angles that Cotto was as much baffled as beaten.

Pacquiao dished out so much punishment that Cotto – supposedly the bigger, stronger man – had no choice but to backpedal away the remainder of the fight to survive. Still, Pacquaio was able to chase down his helpless prey and stop him in the end.

Referee Kenny Bayless’ decision to stop the fight 55 seconds into the 12th round was questionable because Cotto was defending himself. But what was the point of continuing? Cotto, his face bloodied and beaten, had no chance at that point. Pacquiao had won nearly every round.

And remember: This was Miguel Cotto, one of the best fighters of his time, who was reduced to nothing more than a mobile punching bag with savage efficiency rarely seen in the history of a savage sport. It was breathtaking to watch.

How do we put this in perspective?

Pacquiao took Cotto’s welterweight belt, giving him major titles in seven weight divisions. No one else in the history of boxing has done that, making it a remarkable achievement. And even if we dismiss this because of the proliferation of titles, the fact he has been dominating in seven divisions is worthy of awe.

This was his 12th victory over a major titleholder. Again, remarkable.

Over the past few years, he has beaten Erik Morales, Marco Antonio Barrera, Juan Manuel Marquez, Oscar De La Hoya, Ricky Hatton and now Miguel Cotto – all but one by knockout. They all are likely future hall of famers. Simply mind-boggling.

That evidence would seem to suggest that, yes, Pacquiao might be the best of his time and one of the best ever. Is he in the class of Muhammad Ali and Sugar Ray Leonard, as trainer Freddie Roach suggested? I have difficulty saying that, at least now. Again, that might change in a few years.

And some will suggest with justification that he must beat Mayweather before he can be considered even the best of his era.

Howevever, while it’s fun to speculate where Pacquiao will land on the all-time list, I choose to think of him from a different perspective. I’ve learned over about 40 years of following sports that greatness is fleeting. It comes ever so rarely and then is gone before we know it. We should recognize it when we see it, revel in it while it’s happening and then cherish the memory of it when it fades away.

Pacquiao is truly great. We should enjoy this while it lasts because one day soon he will be gone.