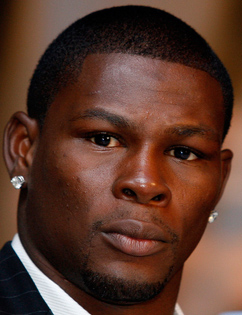 Arthur Abraham (far right) and Jermain Taylor engage in a stare down for the media at a news conference Wednesday in Berlin, Germany, to promote their fight there on Saturday. Photo / Howard Schatz-Showtime

What: First round of Super Six Boxing Classic

The Ring rating: No. 8 super middleweight

Skills: Both super middleweights are boxers by nature. Taylor, who has the better jab, boxes very well when he is allowed to stand his ground or come forward. However, aside from his shotgun jab, the technique of his punches leave something to be desired. Taylor pulls back with his right hand before he launches it, thus often leaving himself open as he steps forward with one-two combinations. Abraham is a cleaner, more accurate puncher who also has a tight defense to compliment his offense. Abraham also appears to have better balance and footwork.
Edge: Abraham

Power: Taylor and Abraham are two of the strongest middleweights of the decade. Neither boxer possesses one-punch KO power, but both are very heavy handed and usually hurt or wear fighters down when they put their punches together. Abraham has more knockouts on his ledger and has stopped seven of his last 10 opponents, while Taylor has only stopped one of his last 10 opponents. However, Taylor has been in with much better competition.
Edge: Even

Speed and athletic ability: Taylor has a slight edge in hand speed and overall athleticism, but there isn't as much of a disparity in this category with Abraham as there was with Taylor's last foe, Carl Froch. Abraham possesses above average hand speed and very good hand-eye coordination and reflexes. Both fighters can explode offensively at unexpected moments during a fight; Taylor does so with a little more speed and power than Abraham.
Edge: Taylor

Defense: Abraham keeps his hands in a high-guard position like a right-handed Winky Wright, but unlike the veteran southpaw he adds a little bit of footwork to compliment this upper-body defense. Abraham doesn't just stand in front of his opponents and cover up. He blocks punches while taking a step or two back, which lessens the impact on his forearms and also forces his opponent to over extend himself (opening up counter-punch opportunities). Taylor doesn't like to be hit and does a decent job of avoiding punches with upper-body movement and footwork when he isn't punching, but when he lets his hands go or allows himself to be backed up he remains vulnerable.
Edge: Abraham

Experience: The 48 rounds the Arkansas native went with Hopkins (twice), Wright, and Pavlik (in their rematch) trumps all of Abraham's professional experience combined.
Edge: Taylor

Chin: Even with a broken jaw, Abraham was able to take the best flush shots of Edison Miranda for seven excruciating rounds during their first fight. At the time, Miranda was an undefeated middleweight KO artist who had stopped 23 of 26 opponents. Taylor doesn't have a bad chin, but his stamina isn't the best. Once he runs out of gas, he's in danger of being wobbled (as he was in the first Hopkins bout) or knocked out (as he was by Pavlik and Froch).
Edge: Abraham

Conditioning: Usually Abraham, who has never run out of gas late in the fight and even gets stronger in the final rounds, would be a shoo-in for this category given Taylor├óÔé¼╦£s recent history. However, Taylor has put in the longest and most comprehensive camp of his career for this fight. The former champ got his weight under control in a pre-camp before starting his real training at George Foreman's youth center in Houston, where he engaged in a new running program designed to give him late-fight energy. Taylor's been on weight since last week.
Edge: Even

Wear and tear: Taylor has had one of the toughest schedules in recent memory by taking on either a current or former titleholder or champ since his first fight with Hopkins. Fighting the high-level opposition has effected Taylor physically (in the form of brutal KOs to Pavlik and Froch) and psychologically (in the form of self doubt after receiving controversial victories over crafty vets such as Hopkins, Wright and Cory Spinks).
Edge: Abraham

Corner: Ozell Nelson has been with Taylor ever since the Little Rock resident first walked into his gym as a teenager. The Arkansas trainer has done surprisingly well with Taylor since he became the head coach following Emanuel Steward's departure after the first Pavlik fight. However, Taylor is the only boxer of note that Nelson trains, and the former champ has lost three of his last four bouts. Abraham's coach Ulli Wegner is one of Germany's best trainers who has not only guided the Armenian middleweight to a world title but also trained former super middleweight titleholder Sven Ottke, former two-time 168-pound beltholder Markus Beyer, and former 140-pound and welterweight title challenger Oktay Urkal.
Edge: Abraham

Outcome: A superbly conditioned and motivated Taylor jumps out to an early lead with a busy jab and occasional right-left combinations that force Abraham to give ground in a defensive stance. However, it's normal for Abraham to start slowly. Abraham will give the early rounds to Taylor while assessing the American's style and looking for counter-punch opportunities. He'll find those opportunities in the middle rounds when Taylor slows down a bit. Abraham's high guard and footwork will keep him from taking too much punishment as he gradually opens up offensively. He will counter Taylor's jab with left hooks and lead rights and as soon as he rocks the former champ, probably in the late rounds, he will press his attack. Once Abraham gets Taylor on the ropes he will take over the fight. Taylor will battle back valiantly, in much the same manner as he did versus Wright when his back touched the ropes in that fight, but he won't get the benefit of the doubt on the scorecards against Abraham in Germany the way he did with the former junior middleweight champ in Memphis, Tenn.