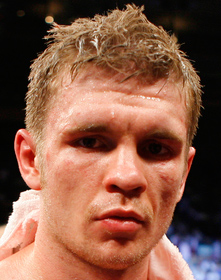 There wasn’t much movement among THE RING-ranked contenders this past week, a relatively quiet one in comparison to the previous weekends, however three talented up-and-comers finally broke into the magazine’s divisional ratings.

Yuri Foreman, Sasha Bakhtin, and Drian Francisco — all of whom are unbeaten — were previously unrated by THE RING but debuted at No. 10 in their respective divisions thanks to the ousting of three former titleholders due to inactivity and poor performances.

Former 154-pound beltholder Sergio Mora was dropped from the junior middleweight rankings because he hasn’t fought since last September when he dropped a unanimous decision to the late Vernon Forrest.

Mora’s departure made room for Foreman (27-0, 8 knockouts), a stick-and-move specialist who learned how to box in Israel and now makes his home in Brooklyn where the Belarusian Jew is studying to become a rabbi.

The 29-year-old boxer is scheduled to challenge Puerto Rican veteran Daniel Santos for a 154-pound belt on the televised undercard of the Nov. 14 Miguel Cotto-Manny Pacquiao pay-per-view event from Las Vegas.

Former two-division beltholder Roberto Vasquez, who was THE RING’s No. 9-rated bantamweight contender, exited the 118-pound ratings after dropping down to the junior bantamweight division, where he suffered his second loss in a row.

The 28-year-old ring general’s best victory was seven-round stoppage of veteran Hidenobu Honda last April. Honda, who was competitive in 12-round title challenges to Alexander Munoz and Thai legend Pongsaklek Wongjongkam, had never been stopped.

Bakhtin is scheduled to defend his OPBF belt against Seung-Suk Chae on Nov. 6 in South Korea.

Former 115-pound titleholder Dmitry Kirillov was removed from the junior bantamweight rankings because he has not fought since his fifth-round KO loss to Vic Darchinyan last August. The Russian boxer’s departure made way for Drian Francisco, a 26-year-old boxer-puncher from the Philippines who is coming off a 10-round stoppage of Roberto Vasquez on Oct. 3 in Manila.

Francisco knocked out the same Vasquez, a former 108- and 112-pound belt holder, who was removed from THE RING’s bantamweight rankings.

Sergio Mora (No. 5 last week) has not fought since September 13, 2008, and therefore exits due to inactivity. Mora’s departure moves up everybody rated six or below last week one spot each, and makes room for Yuri Foreman to enter at No. 10.

Roberto Vasquez (No. 2 last week), who returned to junior bantamweight, has now lost two fights in a row, including being stopped by Drian Francisco in his most recent bout, departs. Vazquez’ exit pushes up Fernando Montiel from No. 10 to No. 9, and makes room for Sasha Bakhtin to debut at No. 10.

Dmitri Kirillov (No. 5 last week) is also a victim of inactivity, and exits due to the fact he has not fought since August 2, 2008. Kirillov’s departure gave us the opportunity to revamp the division, resulting in a major shakeup.

Alexander Munoz has accomplished very little since beating Nobuo Nashiro in May 2007, while Nashiro has won a vacant alphabet belt and tallied two successful defenses. Therefore, Munoz falls from No. 2 to No. 5, and Nashiro advances from No. 3 to No. 2. Also making progress is Hugo Cazarez, who jumps from No. 8 to No. 4 due to holding Nashiro to a draw.