Hopkins motivated for Jones rematch in 2010 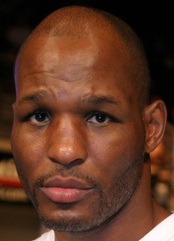 When Bernard Hopkins fought Roy Jones Jr. in 1993, the young middleweight contender was known only to hardcore fans.

Casual fans watching Hopkins on HBO for the first time expected Jones, considered the sport's most talented prospect, to knock out the Philadelphia product as he had 20 of his first 21 opponents.

Jones won a unanimous 12-round decision but Hopkins forced the normally explosive 1988 Olympian to box cautiously and he won four rounds on all three official scorecards, serving notice that he might also be a fighter worth watching. They both were.

Over the next two decades, Jones and Hopkins proved to be among the best fighters of their generation. However, they took separate paths in forging their hall-of-fame legacies.

A rematch has been talked about many times over the years, but finally, 16 years after their first fight, Hopkins and Jones have agreed to a return match.

ESPN.com broke the news on Friday that the two signed to fight sometime in the first quarter of 2010. Hopkins confirmed it with RingTV.com later that evening.

“(Golden Boy Promotions CEO) Richard (Schaefer) confirmed it with me today,” Hopkins said from his home in Delaware. “We had been going back and forth over the last 48 hours finalizing the agreement. I signed yesterday. Jones must have signed today.”

“Richard is working on (the tune-up fight) right now,” Hopkins said. “I'd rather go straight into the Jones rematch but he had already committed to the Danny Green fight, and I didn't want to be inactive since last October.

“I don't like tune-up fights. There's a lot of risk involved. I almost missed out on my fight with Oscar De La Hoya when he struggled with Felix Sturm in a fight that was supposed to build up our match.”

The rematch with Jones wasn't discussed in earnest until Hopkins unified the major middleweight titles in 2001. Jones was the undisputed light heavyweight champ and considered by many to be the pound-for-pound best in the sport at the time. In September of that year, Hopkins solidified his claim as the middleweight king by knocking out then-undefeated and 3-to-1 favorite Felix Trinidad.

There was considerable fan support for the rematch in the early part of the decade, and talks made it to the negotiating table in 2002 and 2003, but the discussion never progressed because of the stubborn demand both fighters made to land the lion's share of a 60-40 split.

Now, with the decade almost over and both men in their 40s, the two finally agreed to a 50-50 split. However, there's a clause in the contract that states if a knockout occurs, the fighter who scored the stoppage will receive a 60-percent split.

“You better believe that's in the contract,” Hopkins said. “Roy's been so loud about wanting 60 percent for all these years, let's see how bad he really wants it. I'm not a knockout artist but 60 percent is something to fight for. It's definitely extra motivation for me.”

Hopkins said motivation was a key component in the rematch getting made. The 44-yer-old veteran had considered fights with crusierweight champ Tomasz Adamek and the winner of the Chad Dawson-Glen Johnson rematch for the light heavyweight title, but he says he was more motivated to fight Jones.

“In many ways it's a grudge match for me,” said Hopkins. “I respect Roy as a fighter and what he's accomplished in the ring, but I don't like him as a person.

“He jerked me around for many years and used me, with the lure of making a rematch, just to get leverage in his negotiations for other fights. I once flew to Florida to try to get a deal done, man to man, but he didn't treat me like a man. Instead, he threw a lot of dirt in my face, and I haven't forgotten about it.

“That's going to get me through many long days of training with Naazim Richardson for this fight.”

His personal dislike for Jones wasn't the only factor in pursuing a rematch. Hopkins said he was motivated by the opportunity to “erase” what he feels was the only decisive loss of his 20-year career.

Hopkins lost his pro debut by a four-round majority decision. He dropped two disputed decisions to Jermain Taylor in 2005. The first loss was a split decision that most of the ringside reporters scored for Hopkins. Taylor won the rematch by unanimous scores of 115-113. In his last loss, Hopkins dropped a split decision to Joe Calzaghe that some boxing writers thought he deserved to win.

“I'm at the crossroads of a two-decade-long journey,” Hopkins said. “What better way to end my career than by beating the one man who can say he really beat me? To me, that would be a story book ending to my career.

“And if I can knock him out, and believe me I will go for it if it presents itself, that would one-up his decision over me. Getting 60 percent would be icing on the cake.

“Just so we're clear on this, it counts as a knockout if it's a TKO (technical stoppage), or if somebody from your corner throws in the towel, or if you can't finish the fight for any reason. If you quit, you're going to get 40 percent.”

Hopkins said the fight will likely take place on the first Saturday in February, “before the NBA All-Star Game).” There is no site for the fight yet, but he said his preference in Atlantic City, N.J.

The rematch will be televised live on HBO Pay-Per-View. Hopkins said the idea for the knockout winner taking 60 percent came from the network's PPV guru, Mark Taffet.

Hopkins said his planned December tune-up fight could wind up as a small pay-per-view show, but he's hoping Schaefer can negotiate a deal with a basic cable network.

“I can't go on record yet, but I think Richard's going to get it done so that more fans can see the fight (on basic cable),” Hopkins said. “I'm willing to take a pay cut to make it happen. The fight is important for me to knock some rust off, but it can also serve as an infomercial for the rematch.”

Hopkins wants the tune-up fight to take place in his native Philadelphia, where Golden Boy Promotions can load the undercard with local prospects such as Rock Allen, Danny Garcia and Karl Dargan.