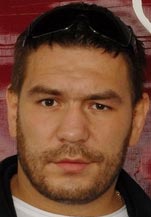 Wladimir Klitschko has won his share of belts — including the WBO (twice), IBF and IBO versions of the heavyweight title — during his 55-bout pro career, but on June 20 THE RING's No. 1 contender will get the opportunity to fight for the championship that means the most to him — THE RING heavyweight title — when he takes on THE RING's No. 3 contender Ruslan Chagaev. Photo by Ed Mulholland/fightwireimages.com

As a subscriber to THE RING, Bernd B├Ânte is well aware of this section of the magazine’s ratings policy. Last week, the co-manager of Wladimir Klitschko was especially concerned with the “in certain instances” provision.

B├Ânte’s fighter, THE RING’s number-one heavyweight contender, found himself without a dance partner for a June 20 showdown that had all but sold out a 60,000-seat soccer stadium in Germany when original opponent David Haye pulled out of the fight last Wednesday with a back injury.

Ruslan Chagaev, THE RING’s number-three heavyweight contender, was scheduled to fight Nikolai Valuev two weeks ago in Finland but was shown to have a hepatitis B antigen in his system and was not allowed to fight there.

It made all the sense in the world to match up the two heavyweight beltholders, both of whom are well known in Germany, but at Klitschko's behest his co-managers B├Ânte and Shelly Finkel set out to learn whether the showdown met THE RING’s criteria to fill its vacant heavyweight championship before finalizing the bout.

It did, but it took B├Ânte and Finkel a day to find out.

“I was just about to leave the office on Thursday when the phone rang,” said Nigel Collins, Editor-In-Chief of THE RING. “The caller ID revealed it was Shelly Finkel. Well, I figured that he would leave a message and that I would get it first thing in the morning.

“While driving home my cell phone rang. I looked and saw it was Shelly Finkel again. I don’t like to talk while driving, so I planned to call him back when I got home.

“As soon as I got home (RING Managing Editor) Joe Santoliquito called and told me that maybe I should have answered those calls from Shelly. He said, ‘I just got off the phone with Bernd B├Ânte. They’re close to making a Klitschko-Chagaev fight but they want to know if it would be for the RING title.'”

Although the fight had just become a possibility, Collins and the magazine’s editorial board had already considered the scenario.

“Ever since Vitali Klitschko returned and earned a number-two ranking in our ratings I received a number of emails — mostly from Europe — asking if we would recognize the winner of a Wladimir Klitschko-Chagaev fight as our champion if it ever happened,” Collins said.

Even months ago, the editors leaned toward yes.

“We knew we didn’t have time to poll the Ratings Panel but we decided that the matchup was worthy because we really couldn’t come up with a good reason why it shouldn’t be for the RING title,” Collins said.

Chagaev, the WBA titleholder, is unbeaten (25-0-1, 19 KOs) and has victories over RING-rated contenders Valuev and John Ruiz.

The only heavyweight with comparable stats to Klitschko and Chagaev is WBC beltholder Vitali Klitschko, THE RING’s number-two contender, who has vowed never to fight his younger brother.

Collins believes that sibling rivalry had a part in Klitschko’s desire to fight for THE RING title.

“The last fighter to hold THE RING title was Vitali,” he said. “I think in Wladimir’s mind winning the title at least makes him equal to his older brother. They have repeatedly said that they will never fight each other, but that doesn’t mean that they aren’t competitive with one another.”

Another reason THE RING title was important to Klitschko is history, Collins added.

“I remember when I awarded THE RING title to Vitali, B├Ânte told me that it would one day be enshrined in the same display where Max Schmeling’s title belt is held,” he said. “The Klitschkos have a deep respect for Schmeling, they idolized him. They’ve seen his title belt and they’ve seen that it was a RING belt. They’re very familiar with history, they want that connection all the way back to Schmeling. They know what it means to hold the RING title.”

Omar Nino (No. 7 last week) won a technical decision over Juanito Rubillar (No. 6 last week), so they have traded places in THE RING ratings.

Nelson Dieppa (No. 8 last week) has not fought since April 2008 and exits due to inactivity. He is replaced by Brahim Asloum, who was also removed for inactivity, but has now returned to action.