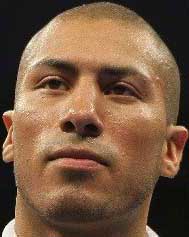 Molina Jr. (16-0, 12 KOs) had his heavy hands full with Carlos Vinan (8-10-3, 1 KO) for one and half rounds before wearing down the tough little pressure fighter with a series of powerful right crosses and left hooks that ended the scheduled eight-round contest midway through the second round.

Molina, a popular fighter from Covina, Calif., was swarmed by the much shorter Vinan for the entire first round. The pressure fighter from Newark, New Jersey, was more formidable than his record or pudgy body would suggest.

Vinan pushed Molina back into his own corner and landed his share of shots, but the taller prospect landed power punches of his own with his back to the ropes. Vinan pressed the favorite to the other side of the ring and continued to swarm him with both hands while Molina looked for opportunities to drop clean power shots, which he did, landing hard hooks, uppercuts, and a one-two combination that almost had the little fireplug down at the bell, but the gutsy journeyman slipped instead.

“That guy came to fight, didn’t he?” Molina joked after the fight. “He was durable and he came to win. He can take a hell of a shot. That’s OK. My promoter knows what he’s doing. My opponent gave me good work tonight. We were in a fight, which is what I wanted. We’re not in the ring to play patty cake.”

No they weren’t. They were exchanging solid punches, but Molina’s were much harder and one minute into the second round Vinan backed off and slowed down considerably. From a distance Vinan was a sitting duck for a number of right crosses and hooks that wobbled the journeyman but didn’t send him down. Luckily referee David Mednoza saw enough and stepped in to save Vinan from his own toughness.

The 2008 U.S. Olympian didn’t mind having a short night. He says his fights will always end quickly when his opponent comes after him.

“I have a target on the back of my head,” said Estrada, an East L.A. native who campaigns in the middleweight and super middleweight divisions.
“I’m an Olympian so everyone wants to knock me out. I think he wanted to knock me out, that was his objective.”

Estrada didn’t have to look for his wild-swinging opponent and barely broke a sweat taking Craig out, ending the bout at 1:41 of the opening round.

Welterweight Javier Molina (1-0, 1 KO), Estrada’s Olympic teammate from Commerce, Calif., made his pro debut a successful and impressive one, stopping Jaime Cabrera (0-1) in the second round of their scheduled four rounder.

Molina, no relation to John Molina Jr., kept Cabrera on the end of a long jab in the first round, controlling the Alhambra, Calif.-based fighter with one-two combinations. Molina finished matters in the next round, dropping Cabrera three times; the first knockdown courtesy of two right hands, the second from follow-up hooks and body shots, and the third from an accurate uppercut.

In the opening bout of the evening, light heavyweight prospect Ismayl Sillakh (7-0, 6 KOs) knocked out Carlos Reyes (4-2, 2 KOs) in the third round of their scheduled four rounder with a perfectly timed straight right to the stomach.

Sillakh, a Ukraine-born boxer now based in Simi Valley, Calif., exhibited a sharp jab and accurate power punches as he stalked Reyes, a strong-but-defensively-limited fighter from Phoenix, Arizona. By the second round, Sillakh’s precise body punches and lead right hands had all but took the fight out of Reyes, who couldn’t figure out how to get past the tall rangy fighter’s long jab.

Reyes let out a gasp when Sillakh’s right to the body landed with a thud. He dropped to one knee where he stayed for referee David Mendoza’s full count at 1:42 of the round.