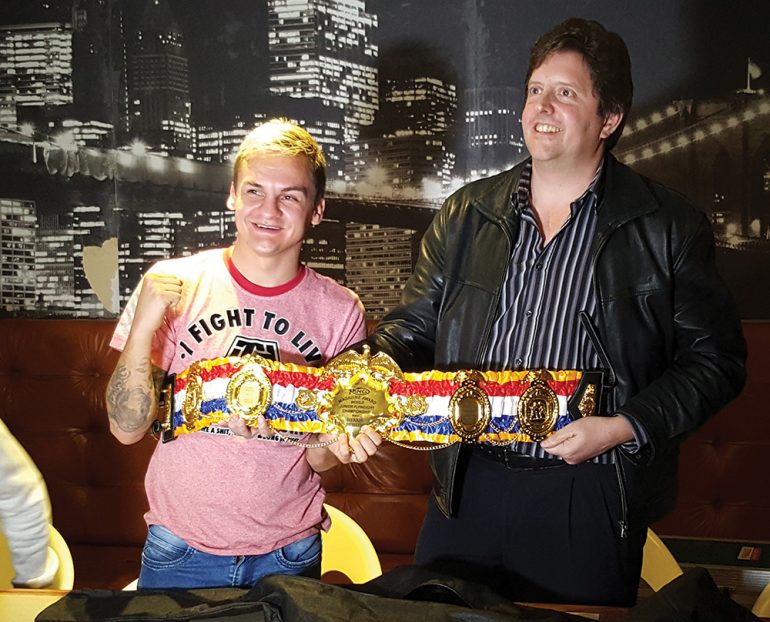 South African correspondent Droeks Malan presents the Ring junior flyweight title to Hekkie Budler, which he earned with an upset win over Ryoichi Taguchi in May 2018.
19
Dec
by Anson Wainwright

Former two-weight titleholder Hekkie Budler was officially named the mandatory challenger to Ring/WBA/WBC junior flyweight champion Kenshiro Teraji at the WBC convention last month. And Budler, who is rated No. 3 by The Ring at 108 pounds, is eager to face the most outstanding fighter in the division next.

“Hopefully before [Teraji] gets a unification shot, [he faces me and I can] prove myself again,” Budler (34-4, 10 knockouts) told The Ring. The other sanctioning body titles are held by Jonathan Gonzalez (WBO) and Sivenathi Nontshinga (IBF).

“Maybe I can beat him and I can get that [unification]. I’m already training. I’ll be training all of December, just to be ready for anything that they might surprise me [with].”

On New Year’s Eve in 2018, the 34-year-old South African lost the Ring and WBA belts via 10th-round stoppage to Hiroto Kyoguchi, who defended them four times before losing to Teraji in November 2022.

Budler, who has also held the WBA strawweight title, went into a 28-month period of inactivity driven by injuries, but he breathed new life into his career by scoring a hard-fought win over former WBO titlist Elwin Soto (UD 12) in June, doing so on Soto’s home turf in Mexico.

With that victory, the popular Budler once again placed himself front and center for a title shot, and he doesn’t want to lose any momentum by waiting around.

“Hopefully early next year; I hear about February, March, April — that would be perfect,” he said. “If it’s a bit later, it would be a bit of a push, because I’d like to fight sooner than that. Maybe I can fight twice, three times in one year, but we’ll see what happens. Watch this space.”

Teraji’s own career suffered a setback when he lost a shocking upset to countryman Masamichi Yabuki in September 2021. He righted the ship by knocking out Yabuki in the rematch, then further separated himself from everyone at junior flyweight with a dominant display against Kyoguchi in their unification showdown.

“He looked like he was back in top form again,” said Budler. “I thought he was going to win on points, not by knockout, because of his style. It looked easy for him. It was as though Kyoguchi fought scared. It wasn’t the same guy who fought me. Maybe Kenshiro was too good for him? He was on the night — that’s boxing.”

Budler was impressed by how Teraji appears to have stepped up his offensive game since the Yabuki loss.

“It’s like he’s been taught how to sit on his punch, hitting with everything he’s got, every single shot,” he said. “When I fight him, I’ll have to be prepared for that. But I enjoy fighting guys that hit and come to fight, because that’s what I do. He’s definitely improved, he’s definitely hitting harder and he’s definitely the best guy in the division, and I like that.”