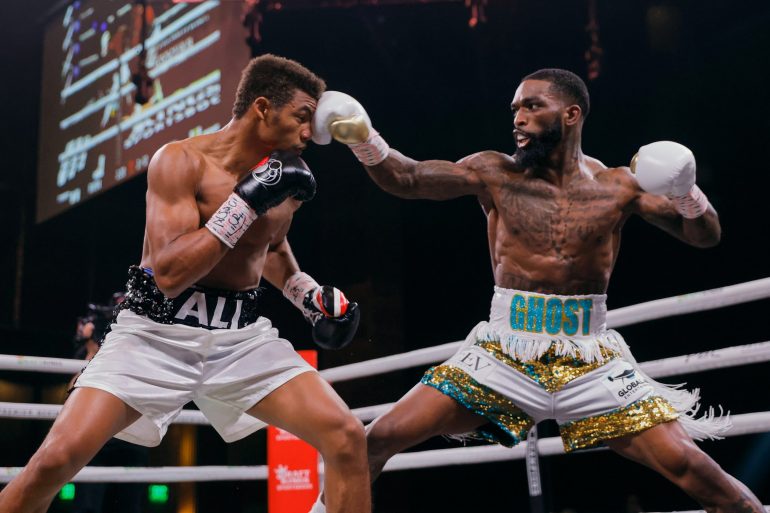 Frank Martin keeps it simple, like his promoter, unified welterweight titlist Errol Spence Jr. Keep your head down, your mouth shut, work hard and fight. It’s that easy to succeed in boxing and Martin, the lightweight southpaw, proved it Saturday night against previously undefeated Michel Rivera.

Martin, The Ring’s No. 7-ranked lightweight, did nothing flashy in making easy work of Rivera (ranked No. 8), winning a 12-round unanimous decision at The Chelsea at The Cosmopolitan in Las Vegas on a PBC event on Showtime.

“This is just what I do,” Martin said. “I felt good tonight. There were some things that I saw in there that I didn’t capitalize on, but we went in there and got the job done.

“In the corner Derrick (James) was telling me to stay on the outside, watch out for the right hand and work the game plan. I was using my legs and I could have done it a lot more. It worked for us tonight, but there’s a lot of room for improvement and we’re going to keep working.”

After piling up each round, coming forward, using pressure to maintain a comfortable distance and pace, Martin blew the fight wide open with :33 left in the seventh.

A straight left to the chin set up a crushing right hook, which sent Rivera down for the second time in his career.

“We believe in ‘Man Down.’ He got caught slipping and he went down,” Martin said. “I just believe in myself and I believe in our team. We know what we’re doing and we’re working consistently. We believed in it and believe that we’re ready for any of the top fighters, so let us get them. We’re ready to eat.”

“It’s a blessing and (Spence and Jermell Charlo) keep me going,” Martin said. “I’m always watching Errol when he’s sparring and I’m always asking questions and looking to get better. Seeing champions on top like them, I’m getting nothing but game from them.

“We want all of them. Gervonta Davis, Devin Haney, we’re ready. Let’s make it happen.”

For Rivera, it’s time to reflect and learn what he did wrong to move forward.

“I went in there for a win; I didn’t come here to lose,” he said. “I was feeling pretty good today, but by round four or five, I think I started to feel the effects of the weight cut. I don’t make excuses, but I’m a big guy for the division.

“I’m pretty fast, but you have to be faster to fight a guy like this. I was too slow tonight. I tried to use my jab to keep him off me. He was the better guy today. I won’t take anything away from him. I don’t want to learn how to lose. I’m just going to work hard to win again. I don’t want losing to feeling normal. I work to win.” 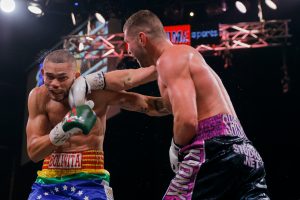 “This was the biggest win of his career so far, and it’s what he’s been waiting on,” said SugarHill Steward, Shishkin’s trainer. “He’s been working hard and I think that the extra time between fights helped him out.

“I’m happy with the way he performed. I’d be happy if he jabbed even more, and that’s something that he’ll work on more. That’s what these fights are for. He’s going to keep working and getting better. I want him to box and be strong. Kronk style.” 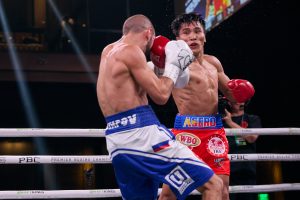 “I’m very happy with the victory,” Astrolabio said. “This was my first time in the U.S. and I’m thankful to Manny Pacquiao and my whole team for this opportunity. I felt very strong against my opponent. Just like I did against Guillermo Rigondeaux, and that gave me confidence for this fight.

“I will fight whoever I’m able to, but my dream is to become world champion. I want to fight for the belts. I’m so thankful that I had this and that I was able to give everyone a knockout. This is the biggest moment of my career, and I’m going to keep pushing to fight the best.”

Astrolabio used a right uppercut to Potapov’s chin to end it. Referee Robert Hoyle counted out Potapov as he kneeled during the count.

“I don’t really have anything to say about my performance,” Potapov said. “He was the better fighter tonight.”