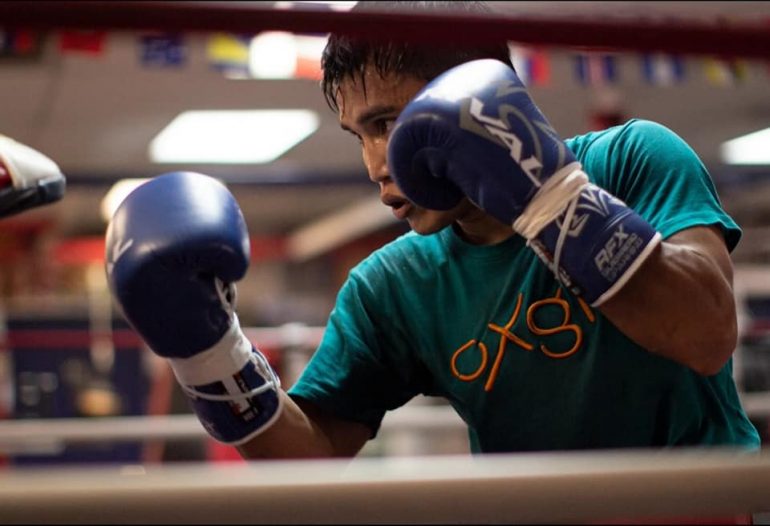 At a time when Philippine boxing could use some good news, Vincent Astrolabio is hoping to deliver some in the final major show of the year.

In a year when all of the country’s world titleholders lost their belts, Astrolabio could set himself up for a world title opportunity for 2023 if he emerges victorious this Saturday night against Nikolai Potapov. The IBF bantamweight eliminator bout will take place at the Cosmopolitan in Las Vegas, and will open up the Showtime Championship Boxing broadcast.

Astrolabio, a 25-year-old from Manny Pacquiao’s hometown of General Santos City, says he’s ready for the big stage in his first fight in the United States.

“I want to knock out my opponent because if I win, a lot of fans in the Philippines will recognize me as a future world champion,” said Astrolabio (17-3, 12 knockouts), who is promoted by Pacquiao’s MP Promotions.

Astrolabio is coming into the fight on a five-fight winning streak, but the primary reason he’s getting this opportunity is his unanimous decision win over former junior featherweight titleholder Guillermo Rigondeaux in February. Astrolabio entered the ring in Dubai as a bounce-back opponent for Rigondeaux after his dreadful decision loss to John Riel Casimero, but squeaked out a unanimous decision after scoring a knockdown in round 8.

“I became more confident after beating Rigondeaux. Now I’m training even harder for this fight,” said Astrolabio, who is rated no. 5 by The Ring at 118 pounds.

Success has not been a lineal journey for Astrolabio. He turned pro in 2015 after a 32-fight amateur career, and won his first ten bouts before suffering a shock decision loss to journeyman John Mark Apolinario in 2017, followed the next year by a fourth round stoppage to Yuki Strong Kobayashi on the Pacquiao-Matthysse card in Malaysia and a majority decision loss to ZongLi He in China.

Through it all, trainer Nonoy Neri never gave up on Astrolabio, chalking up the defeats to ongoing family issues at the time. Neri, a long-time Pacquiao assistant, said he has seen plenty of Potopov (23-2-1, 11 KOs), a Brooklyn-based Russian who is seeking a big win after being stopped by former junior bantamweight titleholder Omar Narvaez in 2017 and lost a majority decision to Joshua Greer Jr. in his two biggest step-up fights.

“I know Potapov, I saw his many fights, he’s a good boxer but he has no power,” said Neri of Potapov, who has won three straight but hasn’t fought since June of 2021.

For this camp, Astrolabio has been training in Las Vegas since mid-November, working with conditioning coach Angel “Memo” Heredia and sparring with the likes of Jonas Sultan and Oscar Escandon.

MP Promotions President Sean Gibbons says a win on Saturday will put Astrolabio in an enviable position at 118 pounds at a time when undisputed champion Naoya Inoue is already talking about moving up in weight to challenge for titles in a fourth division at 122 pounds.

“He’ll be locked in to fight for a world title, that’s all I can tell you,” said Gibbons, who says a win would get Astrolabio ranked no. 1 by the IBF and in the top 3 with the WBO at bantamweight.

“This is what dreams are made out of. You beat Guillermo Rigondeaux better than John Riel Casimero did, you’re a hard-working guy, you just need an opportunity and that’s what Manny Pacquiao Promotions and Sean Gibbons deliver.”