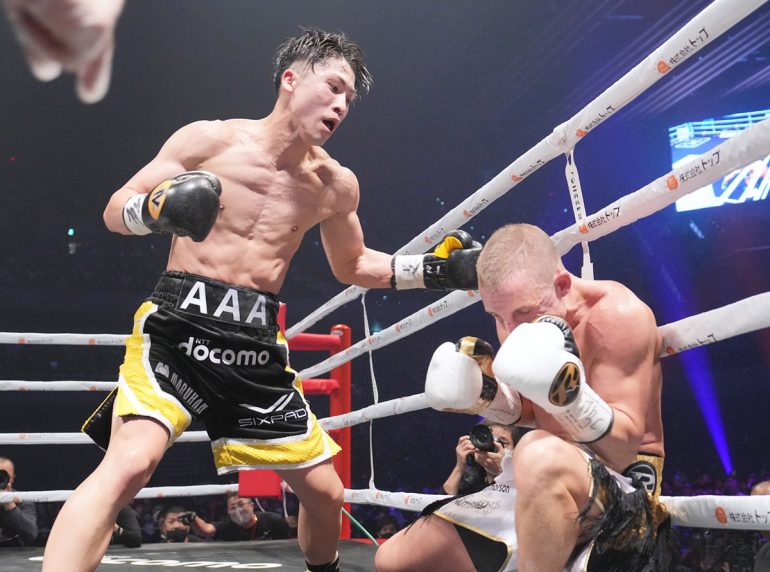 One more belt, one more win in front of his people, and one more dominant performance by one of boxing’s best.

Naoya Inoue defended his Ring bantamweight championship against Paul Butler at the Ariake Arena in Tokyo, Japan with a superb stoppage win in the 11th round of a scheduled 12-round bout, taking Butler’s WBO belt and adding it to his collection of trinkets to lay the final claim to his undisputed championship status.

Inoue, 29, was his usual dominant self in the first two rounds, scoring with both hands while exhibiting a superb defense. Inoue started the third by taking England’s Butler to a corner and unleashing a two-fisted attack that paralyzed the “Baby-Faced Assasin” for a few punishing seconds. 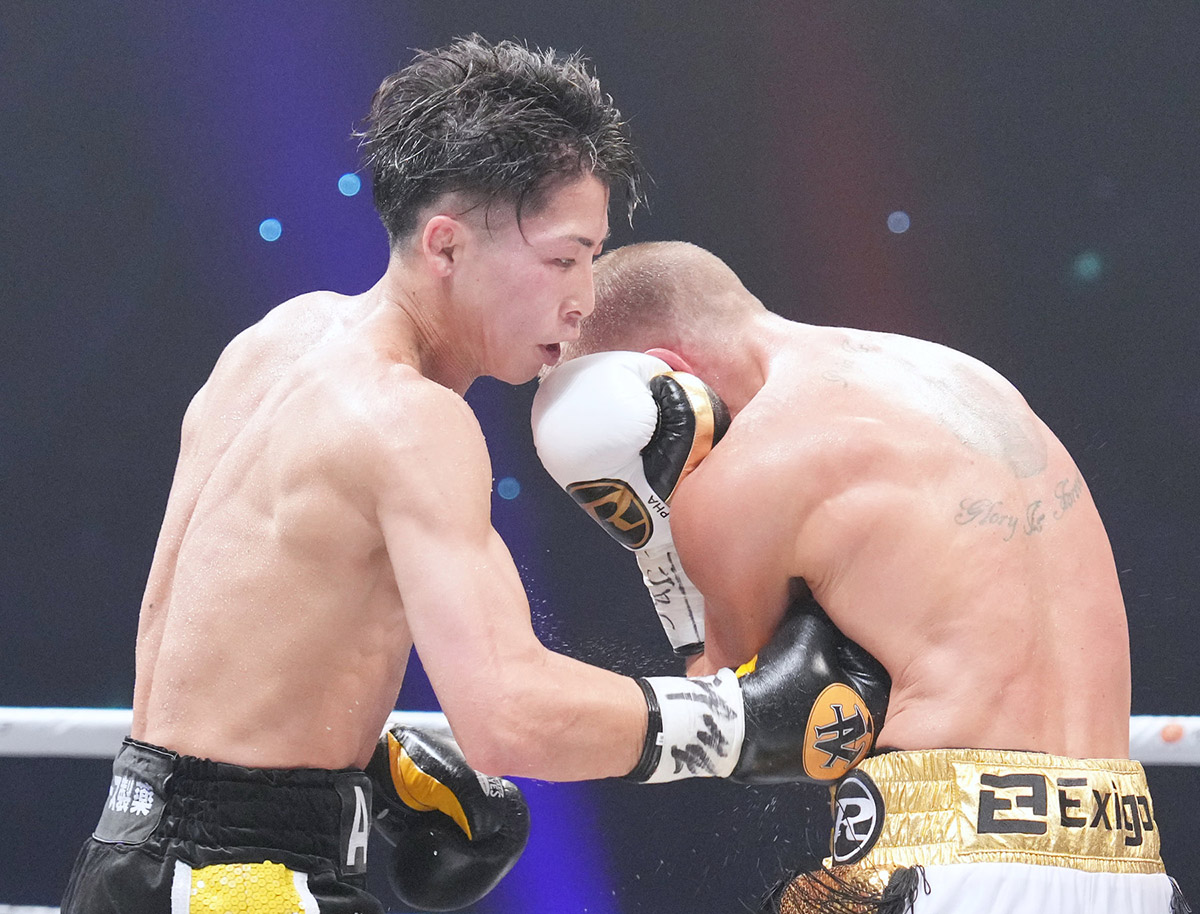 Inoue continued his dominance during the next three rounds, using his superior hand speed and extraordinary footwork to dominate Butler and keep him on the defensive.

Inoue’s hard work paid off – and a bit too much at that. Butler became so defensive as the fight progressed that Inoue had to resort to unsavory tactics such as keeping his hands low or even crossing them behind his back in order to lure Butler to come out of his defensive shell. The fight gradually stalled in the mid-to-late rounds, with Inoue launching a solid but more sporadic attack while Butler went into survival mode, barely throwing any punches.

Butler came alive in the ninth round, stepping up his work rate and appearing decided to take the fight to Inoue. But Inoue was scoring a complete shutout by then, and he finished the job in style with a punishing series of combinations to start the 11th round, driving Butler to the ropes and then sending him to the canvas for the full count, which was reached by referee Bence Kovacs at the 1:09 mark.

POUND FOR POUND NO. 1️⃣

With the win, Inoue improved to 24-0 with 21 knockouts and defended his Ring bantamweight championship as well as his IBF, WBA and WBC belts while grabbing Butler’s WBO trinket.

With the loss, Butler dips to 34-3 with 15 stoppage wins to his credit.

In the co-main event, Andy Hiraoka scored a highlight-reel one-punch demolition of Min Ho Jung in the eighth round of a scheduled 12-rounder in the junior welterweight division.

The tall and athletic Hiraoka, born in Japan to a Japanese mother and a Ghanaian father, was in control throughout the bout, fighting from a southpaw stance against his Korean foe and throwing solid combinations. But not even the progressive dominance of Hiraoka could lead anyone to think that a single punch could produce such a dramatic win. With Jung trying to fight his way out of a corner, Hiraoka landed a demolishing right cross-hook hybrid that sent Jung diving head first onto the canvas midway through the 8th round, and the fight was waved off by referee Takeru Okaniwa. 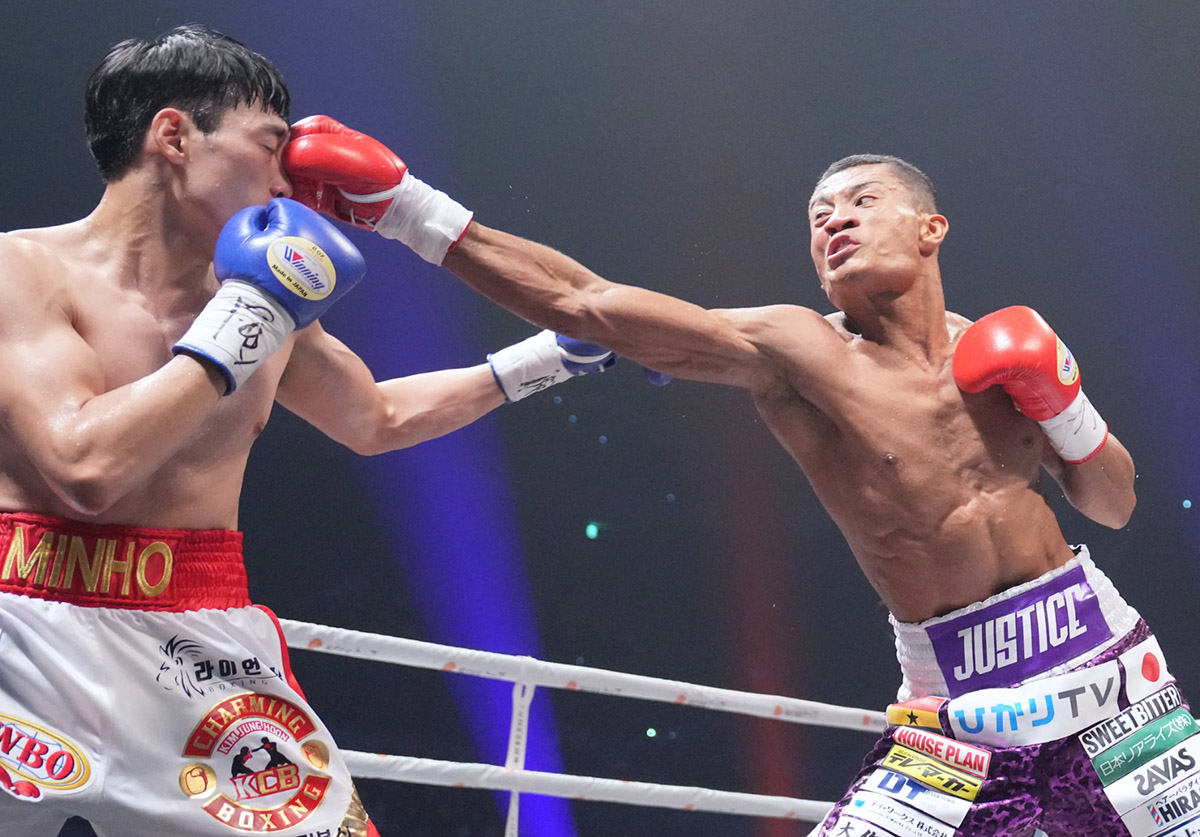 Earlier, Yoshiki Takei stopped Bruno Tarimo in the 11th round of a scheduled 12-rounder in the junior featherweight division.

Tarimo, a Tanzanian transplant to Australia, was no match for Takei in this clash of southpaws. After being dropped in the very first round, Tarimo decided to rough things up against the hard-punching Takei, a former kickboxing champion with superb technical abilities. Tarimo resorted to dirty tactics throughout the bout, but to no avail, as Takei simply dominated him progressively.

Tarimo did score an uncredited flash knockdown in the eighth round, but it was all downhill from there. Having sustained severe facial lacerations and a prolonged beating, Tarimo was mercifully stopped from continuing fighting during the 11th round, thus slipping to 26-4-2 (5 KOs) in what was his first stoppage loss. Takei improved to 6-0 with all his wins coming by stoppage in what is shaping up as a career that will be very interesting to follow closely. 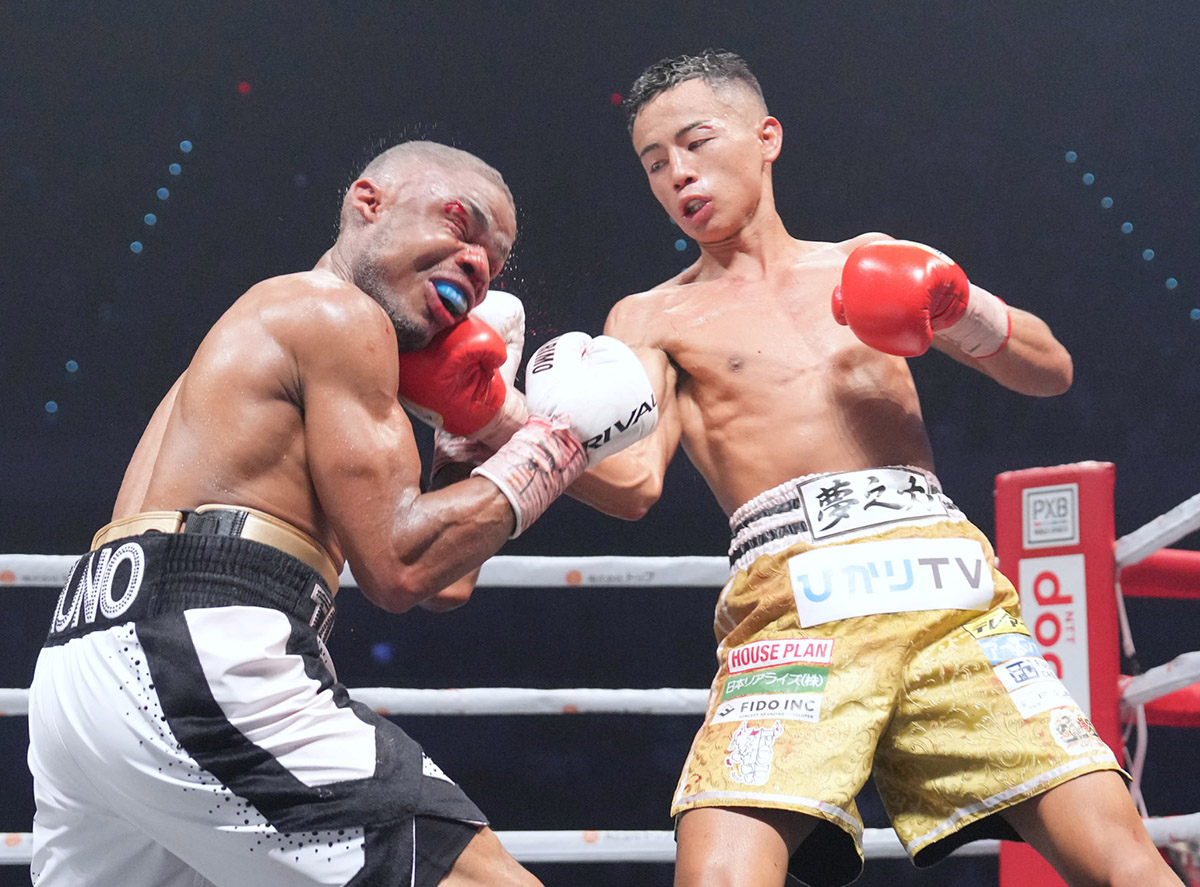 Bruno Tarimo absorbs one of many power shots he took from Yoshiki Takei. (Photo by Naoki Fukuda)

In the first bout of the broadcast, Takuma Inoue dominated Jake Bornea with a sustained two-fisted attack before stopping him on cuts in the 8th round of a scheduled 10-rounder in the featherweight division.

Naoya’s younger brother took control of the fight from the very beginnings, working behind a stiff jab and landing solid rights on Bornea, who fought most of the early rounds from a southpaw stance. Bornea´s lack of response to Inoue’s onslaught led the local fighter to increase the pressure exerted upon his Filipino rival as the rounds progressed, and by the seventh round Inoue was stalking Bornea all over the ring, stepping up his attack to produce a severe cut on Bornea’s left eyebrow.

Trailing badly in the scorecards and bleeding profusely from his cut, Bornea did not protest when referee Katsuhiko Nakamura waved off the contest after a second consecutive medical check-up on that cut during the eighth round. With the win, Inoue improved to 17-1 (4 KOs) while Bornea dropped to 14-4-1 (7 KOs).