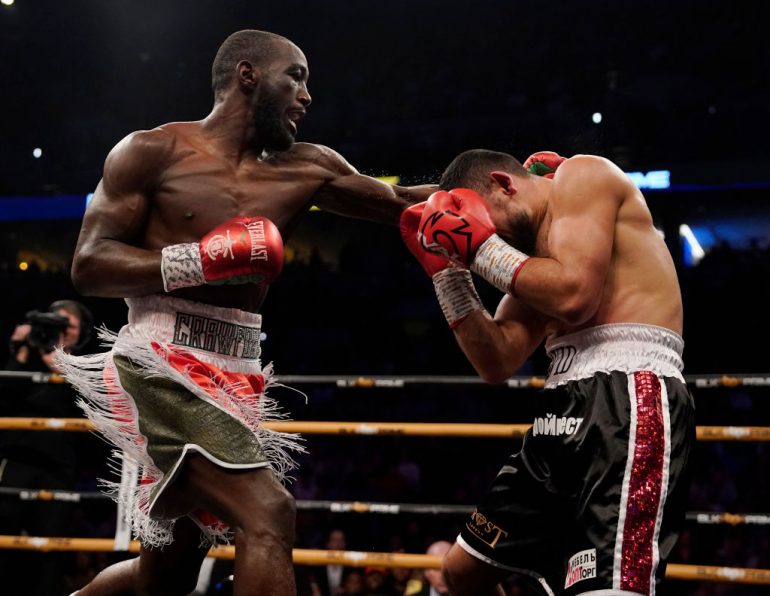 Terence Crawford needed five rounds to knock off 13 months worth of ring rust against tough and game David Avanesyan, and then he abruptly ended the BLK Prime main event in Round 6 of his WBO welterweight title defense to the delight of 18,000 hometown fans assembled at the CHI Health Center in Omaha, Nebraska, on Saturday.

A left uppercut-right hook combination produced the chilling KO that resulted in Avanesyan on his back for nearly a full minute. Prior to the stoppage, Crawford was in full command despite hard constant pressure from Avanesyan, the European champ who had won six straight bouts (including stoppages of then-unbeaten Kerman Lejarraga and Josh Kelly) since suffering a sixth-round TKO at the heavy hands of Egidijus Kavaliauskas in February 2018.

Crawford (39-0, 30 KOs), who hadn’t fought since scoring a 10th-round stoppage of Shawn Porter last November, was caught with a hard right in the opening round and a couple of lefts in Round 2, but The Ring’s No. 2-rated welterweight remained cool and collected as always as he gradually warmed up by utilizing lateral movement behind a probing jab while calmly landing well-placed body shots.

Avanesyan (29-4-1, 14 KOs), The Ring’s No. 8-rated welterweight, remained game and on top of the easy-gliding Crawford in Rounds 3 and 4, but he lacked the punch fluidity and creativity of the pound-for-pound-ranked fighter (No. 3 by The Ring). Crawford stepped up his aggression near the end of Round 4 and stood his ground over the second half of Round 5, adding several uppercuts to his body attack.

The two stood in the center of the ring and traded hard shots for 2 minutes of Round 6, but the three-division champ did a much better job of blocking and countering, which ultimately led to the sudden ending of the fight.

As soon as referee Sparkle Lee waved the bout off without a count at 2:14 of the round, the boxing world wanted to know what’s next. Crawford sat out most of the year while negotiations took place to make the much-demanded undisputed welterweight championship showdown with Errol Spence, however, after several months of “coming close,” the sides could not agree to terms.

Crawford, who cut ties with longtime promoter Top Rank after the Porter fight, quickly took a $10 million offer from upstart streaming platform BLK Prime to get in a stay-busy title defense before the end of 2022. Who knows if Spence, The Ring’s No. 1-rated welterweight (and No. 4 in the P4P rankings), will be in Crawford’s future. The 35-year-old Omaha native didn’t mention his elite rival by name during his post-fight interview (which focused mostly on his homecoming).

“I’m a free agent,” Crawford said. “This was a one-shot deal and hopefully we can make these big bouts in the future.”