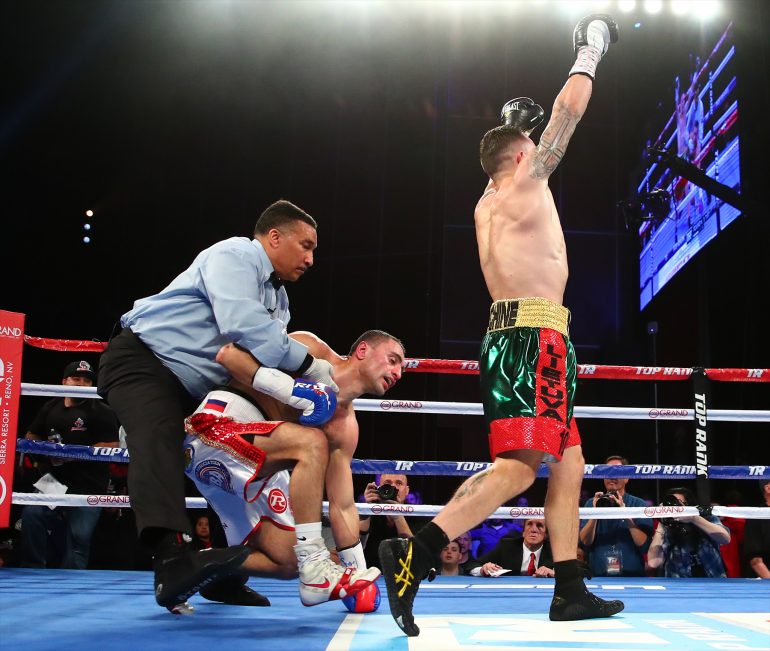 With their stable of welterweights shallow beyond Terence Crawford and Manny Pacquiao, Top Rank needed someone to step up and separate themselves from the pack.

And that’s exactly what Egidijus Kavaliauskas did Friday night.

The 147-pound prospect graduated to contender status with an impressive sixth-round stoppage of David Avanesyan in Reno, Nevada, on ESPN.

The 29-year-old Lithuanian buzzed Avanesyan in with a powerful left hook on the inside in Round 3, and then finished matters three rounds later at the 1:55 mark.

“When I caught him in the third round he wobbled, but he had good conditioning, very strong fighter,” Kavaliauskas (19-0, 16 knockouts) explained. “I saw him recover, I didn’t want to overgo. Little by little, I was still waiting for him to feel it.”

Eventually, his patience paid off. “Mean Machine” found another opening in the sixth and capitalized with a booming right hand looped around the Russian’s gloves. Kavaliauskas followed up with a clocking left and then a series of shots that forced Avanesyan to retreat to the opposite side of the ring.

He laid on the ropes and absorbed at least 25 unanswered shots from Kavaliauskas before referee Tony Weeks saved the wobbled fighter from further damage.

In all, Kavaliauskas connected on 19 of 26 punches in the final frame, a display that proved he’s ready to step up his competition to the top 10.

Avanesyan (23-3-1, 11 KOs) gave former champion Lamont Peterson all he could handle last year in a close decision loss and before that, he topped a faded Sugar Shane Mosley.

With Avanesyan out of the way, Kavaliauskas knows whom he wants to test himself against.

“In the future, I see myself with Terence Crawford fighting for the world title,” he said, “because he will beat Jeff Horn.”