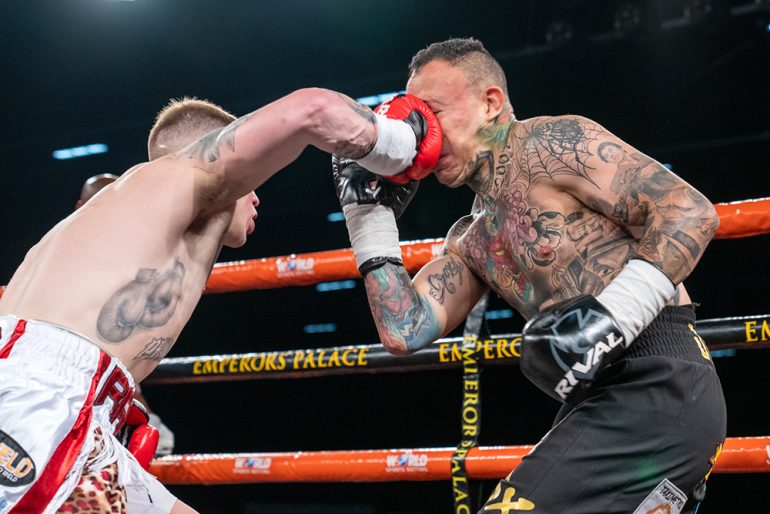 Both men took a look at each other in the opening round as hometown favorite Knapp (15-1-1, 11 knockouts) kept things at distance while Mexico’s Jardon barreled forward looking to get inside. The South African peppered the heavily tattooed former junior lightweight title challenger with jabs and right crosses. 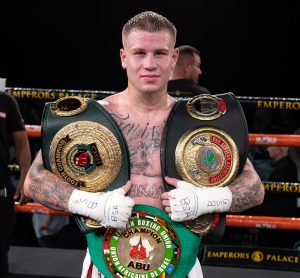 In the third round, Knapp connected with a snapping right cross that dropped Jardon (35-9, 25 KOs) to the seat of his pants in a neutral corner. He rose, looking to meet fire with fire, but the action settled as he moved in close to protect himself from further big punches.

Knapp could never relax as Jardon forced him to work throughout the fight. The 34-year-old Mexican, who was coming off an impressive stoppage over the touted Artem Oganesyan (UD 10), kept throwing and sometimes missed wildly, living up to his “Crazy” moniker. He put up a solid effort but was always a step behind.

Thysse, who was coming off a June defeat to Knapp (SD 12), was clearly the better boxer but had to use his skills to emerge victorious over the Angolan import. At times, Thysse switched off and Ndombassy was only too happy to force the action, testing Thysse’s chin on several occasions.

The South African threatened to end matters in the fourth round when he controlled the action with his jab and right hand. He hurt Ndombassy and unloaded several hard shots with Ndombassy covering up on the ropes. Ndombassy stuck at it and stayed in the fight and even caught Thysse with a good shot in the fifth round.

Thysse got back to his boxing in the seventh and stayed ahead of Ndombassy, who showed heart and kept coming. In the end, Thysse was awarded the unanimous decision: 98-93, 97-93 and 96-95.

Phuzi (13-2, 6 KOs), who had lost decisions to Muller in 2020 (UD 10) and 2021 (SD 10), got off to the better start. However, Muller (23-10-2, 14 KOs), who hadn’t fought in 18 months, worked his way into the bout by making things ugly with grappling and the occasional flurry of punches. Muller holds wins over Mateusz Masternak (SD 10) and Kevin Lerena (UD 10) and has also shared a ring in losing efforts with Ring/IBF/WBA/WBO heavyweight champion Oleksandr Usyk (TKO 3) and two-time world title challenger Thabiso Mchunu (UD 12).

Muller old-manned his way into the fight and threatened the upset, but to Phuzi’s credit, he hung tough and made the third time lucky, claiming the decision by scores of 98-97, 96-94 and 96-93.

The 24-year-old Johannesburg prospect dropped Jelwana in the first round and then again in the fifth. He continued to have things his own way and got the stoppage after landing a combination that forced the referee to jump in at 0:36 of the eighth round.

In the opening bout of the evening, Bryan Thysse successfully made his professional debut in an exciting four-round slugfest against Michael Head (1-1, 1 KO) at light heavyweight.

Both men went at it from the opening bell and didn’t relent. Head touched down in the second round but got to his feet and fought on gamely. At the end of four evenly fought rounds, where both men had their moments, the fight went to the scorecards.

Before the scorecards were read out, the ring announcer told the crowd that promoter Rodney Berman of Golden Gloves had said to him that both men would get a bonus on their purses for their outstanding efforts. There had to be a winner, however, and Thysse claimed a hard-fought split decision by the scores of 39-37 and 38-37, while the other judge scored the contest 38-37 for Head.