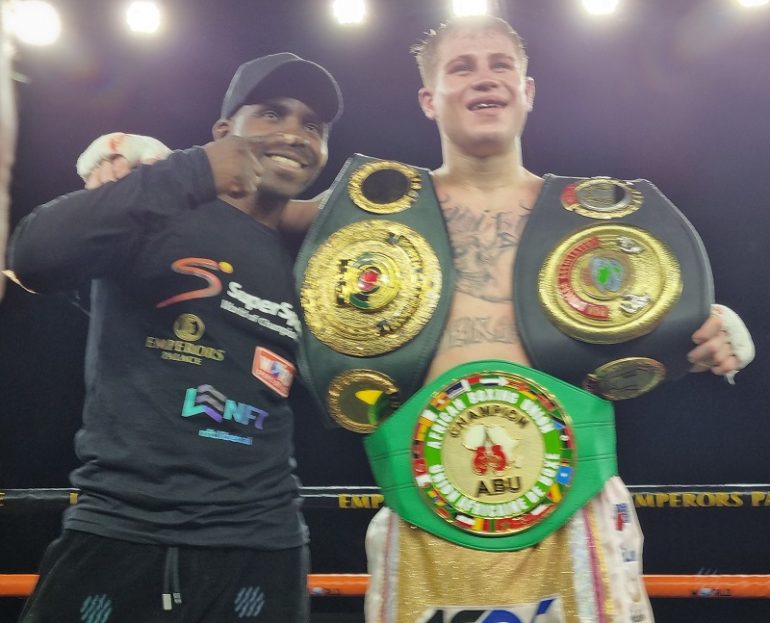 Roarke Knapp surprised friend and foe alike when he won a 12-round split decision over Brandon Thysse in an all-out war, Saturday, night at Emperor’s Palace in Gauteng, South Africa.

In their first encounter in November 2019, Thysse prevailed by seventh round knockout. It looked like he was going to repeat that result, only quicker, when a massive right hand at the start of the first round sent Knapp stumbling into the ropes. Thysse was on him like a harbor shark, raining in combinations to head and body with referee Eric Khoza taking a close look. Somehow Knapp came out of the fog and started fighting back, landing a solid left hook of his own.

Thysse started the second by using his reach and got his jab going. Knapp responded with a left hook/right hand combination, followed by two booming rights moments later that backed Thysse to the ropes. Thysse fought back well with his back on the ropes, landing some short uppercuts.

The two met each other in the center of the ring in the third, where they exchanged heavy combinations, bringing the crowd to its feet. Thysse went back to his jab, only for Knapp to back him up again with a left hook followed by blistering body shots. Thysse again got his distance and scored with some straight punches as the round ended.

The shorter Knapp had some success with his jab to the body in the fourth and Thysse responded by barging in with uppercuts and hooks to the body. Knapp came right back with his trademark left hook/right hand combination, followed by a left hook to the body. Thysse closed the round strong with a right uppercut/left hook combo which swiveled Knapp’s head.

The fifth was an absolute slugfest. Thysse landed a right uppercut followed by a left hook that had Knapp in trouble but he gathered himself and responded with fast combinations and an overhand right, which landed flush. Amazingly Thysse just walked through the punch and landed another big uppercut at the end of the round that had blood gushing from Knapp’s nose.

Knapp exploded again with a pair of rights in the sixth. Several combinations had Thysse briefly hanging on for the first time in the fight. Thysse fought back and the pair traded shots as the round ended. Knapp had a good seventh as well when he started to out-jab the taller man, using his legs to move, only to stop every so often to land a combination to the body before getting back on his bike. A straight right backed Thysse to the ropes. Knapp went after him but Thysse spun out well and landed a hard uppercut just before the bell.

Thysse evened things out in the eighth, landing a hard right followed by a left uppercut that had Knapp answer with a combination of his own. Thysse’s shots seemed to hurt Knapp more than Knapp’s punches hurt Thysse but every time Thysse looked like he was on the verge of getting Knapp in trouble, Knapp responded with just enough to stay in the fight.

Knapp changed gears to box and move in the ninth. He would stop briefly to shoeshine, moving away again before Thysse got off, a tactic that seemed to frustrate his opponent.

Knapp landed a beautiful straight right/left uppercut combination to start the 10th and then deftly stepped out of the way of Thysse’s return fire. Thysse landed a big right but Knapp’s jab to the chest and head seemed to disrupt his offensive rhythm. When Knapp landed another overhand right, Thysse came charging at him but he was less effective than before.

Thysse tried his best to end matters in the 11th round, trapping Knapp on the ropes while digging in thudding body shots. Still, Knapp got off the ropes and returned to moving and jabbing before Thysse landed a straight right flush on Knapp’s chin. It was a good round for Thysse but somehow Knapp just would not go down.

Thysse pushed hard in the final round but Knapp stuck to boxing behind his jab, stopping every so often to shoeshine Thysse with flashy combos. Knapp landed a hard short right followed by a left hook. Thysse responded by flurrying to the body but when he turned his attack to the head, Knapp made him miss.

The bell ended matters to thunderous applause from the crowd as the fighters embraced.

Both fighters showed improvement since their first encounter. Thysse seemed to hurt Knapp in spots but, this time, he could not land the finisher. Knapp, for his part, showed increased versatility, boxing and slugging in spots and an iron will to get through the trenches.

In the main supporting bout, the South African heavyweight title changed hands once again when Chris Thompson pitched a 12-round shutout over Joshua Pretorius.

The southpaw Thompson started the fight by circling to his right while shooting out a fast jab, varying it to the head and body. He landed a fast one-two in the second round before he sat down on his jab, snapping back Pretorius’ head. 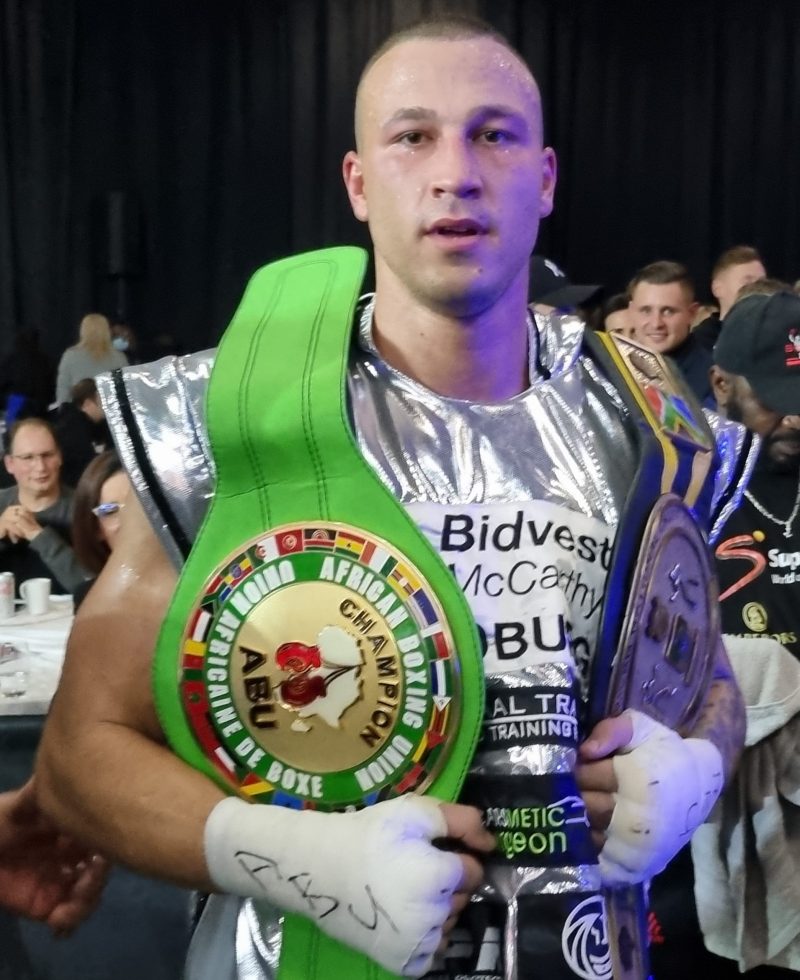 When Pretorius finally got him on the ropes in the seventh, Thompson smothered him, turned him around and responded by landing a one-two.

That was effectively the story of the fight: Thompson moved, varied his jab, both in direction and power, while tossing in a straight left to the body, sneaky right hook and the odd three-punch combination. Pretorius could only land a rare single shot and seemed to have no idea how to cut the ring off on his moving opponent. Thompson’s gas tank was also impressive, allowing him to box on his feet at a steady clip for the full distance.

With this career-best win, Chris Thompson moves to 12-2-1 with seven knockouts while Pretorius drops to 9-6 (5 KOs).

Ghanian Olympic bronze medalist Samuel Takyi, with former WBA welterweight beltholder Ike Quartey in his corner, made an impressive pro debut as a junior lightweight, destroying Mandlenkosi Sibuso (4-2, 1 KO) in two rounds. Takyi punished his opponent in the first round, sending him to the canvas after landing a flush combination. The overmatched Sibuso’s corner saved him from further punishment in the second round by throwing in the towel, forcing the referee to wave the fight off at the 2:04 mark.

The card was presented by Rodney Berman of Golden Gloves Promotions.