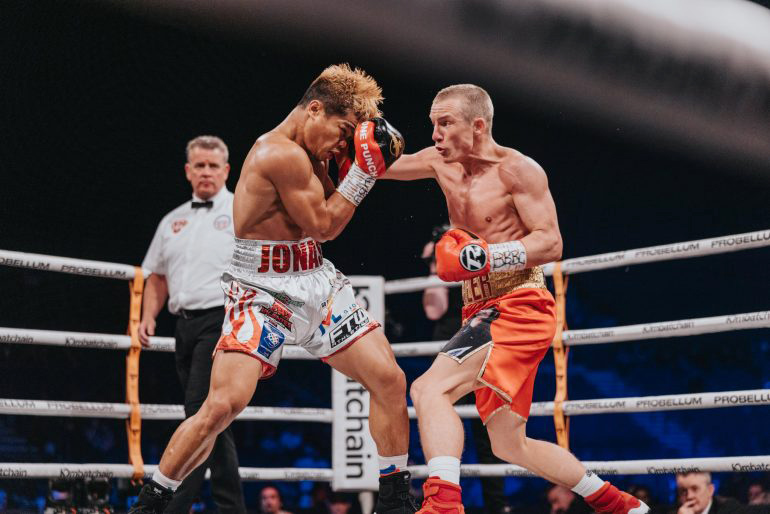 Paul Butler (right) picked up the WBO interim bantamweight title with a unanimous decision over Jonas Sultan in April 2022 and was later upgraded to full champion status.
08
Dec
by Anson Wainwright

Butler, who is rated No. 6 by The Ring at 118 pounds, is looking forward to testing himself against one of the best fighters in the world.

“Anything can happen in boxing. Don’t write me off yet. I’ve earned my seat at this table.”

“I think with this one there’s no pressure on me at all. I can just go there and enjoy myself. I’ve still got to perform, because if I switch off for any moment in that fight, it could be lights out.

“I believe I’m in the form of my life. I’m training the best I’ve ever trained, and training camp and sparring has gone that well – that if I do get the game plan off and the power’s not as big as everyone is making out and I can take the shot, I believe we get him late and we push him late and we keep pushing him. I do believe if he hasn’t got me out of there within six rounds, I win the fight.”

Butler feels Inoue has a certain fear factor that has seen many of his opponents beaten before the opening bell.

“Sort of like the Mike Tyson days, they were beat before they got in [the ring] until Buster Douglas beat him in Tokyo,” he explained. “I don’t fear no man, and I think that plays a big part. It doesn’t bother me in the slightest. Yes, he can punch. Yes, he’s very good. Yes, he’s pound-for-pound. But I don’t care. I’ve grown up in boxing; this will be my 24th year in the sport. I’ve seen everything.”

Nonito Donaire, Butler says, didn’t pay Inoue that respect in their first meeting and had more success than anyone else to date.

“That’s where he’s mainly been pushed and he’s been taken out of his comfort zone, because every other fight he’s been in his comfort zone,” said Butler. “I think it’s mainly Donaire doesn’t fear him, gives him no respect, and I think Inoue is like, ‘Hang on, what’s going on here? This doesn’t normally happen.’ I think that’s got a big part to play in it.

“I think Donaire gets a lot of success off that. Albeit it, he [did] get dropped in Round 11, but he nearly [had] Inoue out of there in Round 9. We all know what Donaire is capable of. He was 37 when he boxed him. I’d like to think I’m a little bit fresher than Donaire at 37.”

It should be noted that Inoue won the rematch with Donaire in brutal fashion.

Butler briefly held the IBF 118-pound title in 2014, then captured the WBO interim title with a unanimous decision over Jonas Sultan in April 2022 and was upgraded to full status when Johnriel Casimero was stripped. The 34-year-old Brit believes there are flaws in Inoue’s game – admittedly small ones – that he can exploit.

“There is gaps in his boxing. You only need to look at a couple of his fights, and there’s gaps there,” explained the 10-to-1 underdog. “I’ve picked up a few things off the [Jason] Moloney fight, quite a lot off the first Donaire fight.

“His hand positioning when he throws certain shots … I’m not going to stand here and tell you the whole game plan, but the positioning of his hands isn’t great when he’s throwing. He’s a bit ignorant in his power; he does rely on that a lot, and if he doesn’t get it off … I’m not going to say he doesn’t have a plan B, because you only need to look at some of his fights where he’s adapted and changed the whole fight within 10 seconds. We have been working on exploiting gaps.”

Butler, who has done a 12-week camp with his trainer, Joe Gallagher, in Bolton, England, and traveled to Japan on December 4, feels disrespected by the boxing world.

“Yeah, I do,” he said. “The WBC have already made Donaire vs. Moloney for the vacant title. I mean, come on. I’m the other half of the main event on December 13. Show us a little respect.

“Look what happened with David Haye and Tony Bellew, the first fight. [Haye’s] Achilles [tendon] goes and there’s not much he could do about it. There’s a rematch, and yes, Bellew wins and wins convincingly. But anything can happen in boxing. Jordan Gill, the first time he lost, he was ill the night before; he was throwing up. Anything can happen in boxing. Don’t write me off yet. I’ve earned my seat at this table.

“Like most say, the first three rounds are the most dangerous. But every round’s dangerous with Inoue, because we’ve seen him take people out late. But I believe if the game plan comes off, a lot of people will be shocked.”