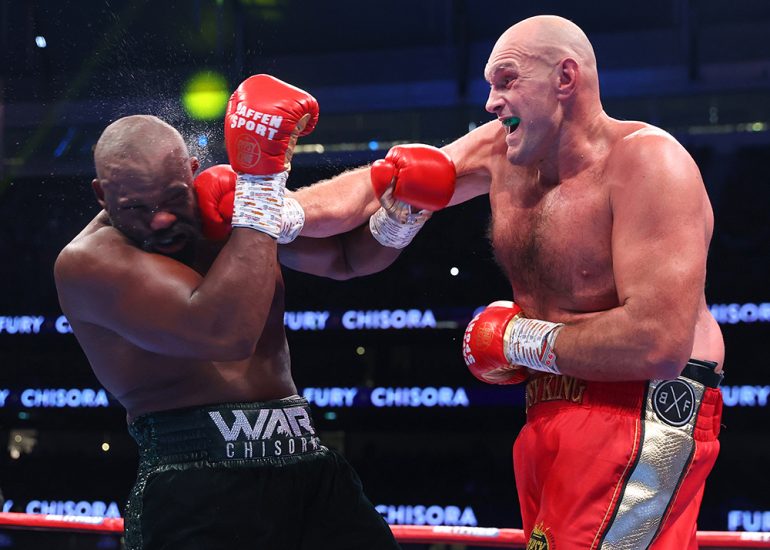 At 38 years old, journeyman Derek “War” Chisora (33-13, 23 KOs) may have had his final chance of a heavyweight title pulverized behind the gloves of “Gypsy King” Tyson Fury (33-0-1, 24 KOs), the reigning WBC and lineal heavyweight champion of the world. Chisora, looking demoralized, had a swollen right eye and bleeding lip when the ref stopped him on his feet in Round 10. By that point, Chisora was a man out of ideas, stumbling forward with little success and repetitive, glancing body shots that had little to no effect on Fury.

The fight itself was a sometimes-frustrating affair, with more clinching than the 60,000 fans at Tottenham Spurs stadium likely would have preferred and Fury’s usual jab-his-head-off, death-by-a-thousand-cuts style proving far too wily for the windmilling arms of the worn-out Chisora. It’s the second time this year Fury has climbed in the ring, after a sixth-round knockout of Dillian Whyte in April.

Still, it remained a somewhat low-expectation setup; Chisora has lost twice previously to Fury. There were fits and starts of slugging between them, particularly in the first and a particularly tasty eighth round where both men opened up, but with little benefit for Chisora, who looked ineffective at best against Fury’s loping combinations and fast, methodical footwork. Other rounds were slower, messier; at the end of the third round, Chisora pulled Fury over and they both stumbled to the canvas in a tangle of limbs. Still, Chisora had plenty of heart and ferocity, continuing to swing madly at Fury even as the champion showboated, feinted and dodged his way through the rounds.

“He’s an absolute warrior and it’s been a privilege to fight him three times,” Fury said of his opponent with characteristic magnanimity; he followed up by leading the crowd in a sing-song chant of Chisora’s name.

Fury, who came out to a spectacular, cinematic ring-walk featuring fireworks and a playlist that included World Cup favorite ‘Three Lions” in  support of the England squad, also managed to finish the fight in explosive fashion. He called out possible future challenger Oleskander Usyk (20-0, 13 KOs), who was ringside. Usyk, currently rated No. 1 pound-for-pound, is the holder of the Ring Magazine heavyweight title that once belonged to Fury, along with the IBF, WBA and WBO belts he took from Anthony Joshua late last year and then defended in a rematch this summer, making him a logical option for a match next year. Until then, the rise of one of the stratospheric stars of boxing, with his wolfish grin and bald-pated head, continues unabated.