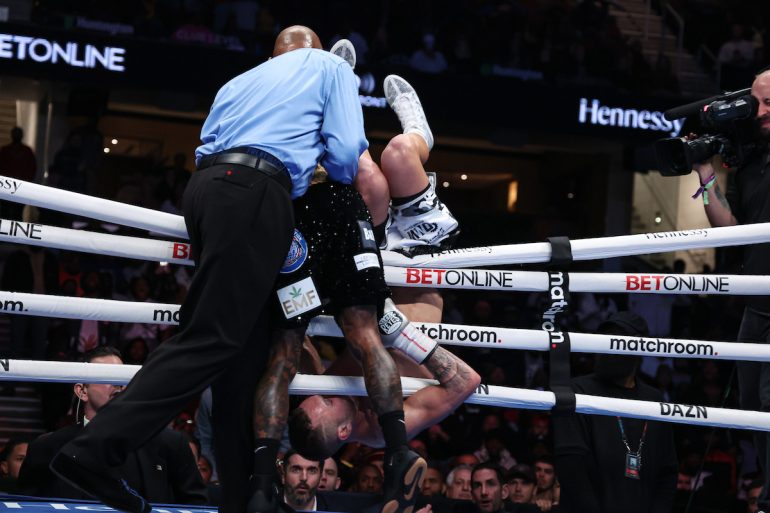 Montana Love and Stevie Spark during their fight at the Rocket Mortgage FieldHouse in Cleveland, Ohio. Photo by Ed Mulholland/Matchroom.
13
Nov
by Ring TV

Controversy reigned in Cleveland, Ohio as junior welterweight up-and-comer Montana Love was disqualified after Steve Spark was lifted over the ropes in a clinch in the sixth round of their scheduled 12-round main event on Saturday.

The fight was building into a cracker through six rounds, with drama in the second round as a Spark attack stunned Love who was put onto the canvas hard by the Aussie in the second round, with a right hand the final punch of a damaging flurry. Love recovered quickly but the crowd were on tenterhooks as Spark knew that he could hurt the hometown star.

Love still had his legs and was looking to counter, as an emboldened Spark stalked Love who was looking to set traps and noticeably began investing in body work. Spark once again launched a ferocious attack in the fifth round, but Love was able to withstand the heavy-handed man from Down Under and fire back. 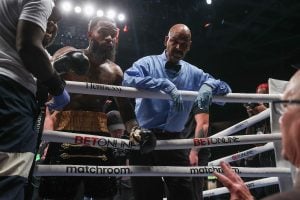 Montana Love and referee David Fields look over the top rope that Stevie Spark fell over. Photo by Melina Pizano/Matchroom

The very first action was an accidental headclash that led to a nasty cut above the left eye of Love, and after a lengthy check from the doctor the fight resumed, and the pair almost immediately got tangled in a clinch that saw the pair land on the ropes heavily and in the melee, Spark toppled over the ropes.

The Australian jumped straight to his feet and back into the ring intent on carrying on a fight that was brewing nicely, but the referee disqualified Love much to the dismay of a crowd that was fully invested in a fight that was building to a crescendo on an exciting night in Cleveland.

“Thank you to Cleveland for the hospitality,” said Spark. “My job is to fight, and this has changed my life. I’m devastated how it ended. I got the early knock down and I was fighting with my whole heart, it was growing into a great fight, but we didn’t want it to end this way.”

“He was using dirty rough house tactics all night and I pushed him off me, I didn’t lift him up or throw him out of the ring,” said Love. “We wanted him to tire out and catch him later on, and that’s where it was going. I want to do it again, he can’t outbox me or outfight me, let’s do it again.” 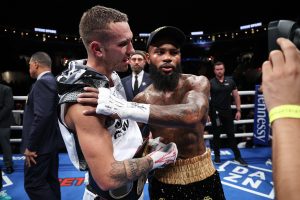 Montana Love and Stevie Spark after their fight in Cleveland, Ohio. Photo by Ed Mulholland/Matchroom

“It was a bad decision,” said promoter Eddie Hearn. “Montana was rough but he didn’t intentionally throw him out of the ring, and Steve got back into the ring and wanted to keep fighting. Referees have a tough job but that was a poor decision and one made too quickly.

“It was turning into a great fight, the commission will review, I would love to do it again.”

Richardson Hitchins claimed his first pro title in his first fight with Matchroom as he picked up the IBF North American 140-pound title against Yomar Alamo.

Hitchins established his jab early and then opened up towards the end of the third round, regularly finding a home for his right hand. The Brooklyn slickster was proving too hot to handle for Alamo, who was met with a stiff jab any time he tried to mount an attack but was keeping Hitchins honest despite not managing to land anything to deter Hitchins.

Hitchins was pitching a shut-out moving into the final rounds and showed signs of pushing for a stoppage as Alamo began to look discouraged and Hitchins began to enjoy himself. Alamo made it to the end of the eighth round, but Alamo and his corner ended the bout on his stool, and Hitchins had a belt placed around his waist for the first time – and made it clear that the man he wants next.

“I could have knocked him out earlier but I’m happy with the performance,” said Hitchins. “I started hurting him and adjusting and eventually I got him out of there.

“I didn’t have to take this fight in Ohio in front of a hostile crowd. I want Montana Love next. I keep being asked that question and I keep giving the same answer, it’s time to ask him if he wants it – I came over to Matchroom, it’s time for him to sign the contract and let’s do it.”

Raymond Ford lived up to his nickname with a ‘Savage’ KO win over Sakaria Lukas to defend his WBA Continental Americas Featherweight title. Ford had bad intentions from the start and Lukas was down inside the opening minute of the fight, although that owed as much to a tangle of legs and collision with the referee.Regardless, Ford peppered away in the opening half of the fight, poured it on in the sixth and went in for the kill in the seventh, with Lukas getting a point deducted for holding and hitting to make his plight even worse. A big left hand in the eighth from Ford was a sign of things to come and as the facial damage was beginning to show on the Namibian as Ford connected cleanly with every shot before delivering the massive right hand that closed the sho.

Thomas Mattice recorded the biggest win of his career to date, outpointing unbeaten Puerto Rican Christian Tapia in a back-and-forth contest. Mattice set the tone by putting Tapia down in the second round with a counter left hook and hurt Tapia again in the third in a ferocious start to the fight.

Tapia grew into it after that rough beginning and began to have success leading into the second half of the fight, a body assault seeming to affect Mattice, but the Ohio man turned the tide back with a big right hand in the seventh. The to and fro action continued to the tenth and final round where both men poured it all out to the final bell, a breathless battle ending with scorecards of 97-92, 96-93, 96-93 for the hometown man who ripped the WBC Continental Americas 130-pound title from Tapia.

Kicking off the DAZN broadcast, Beatriz Ferreira made a great start to life in the pro game, beating fellow Brazilian Taynna Cardoso over four three-minute rounds. Former amateur star Ferreira made the perfect start with a knockdown in the opening round, and repeated that trick in the third round en-route to taking victory 40-34 on all three cards, and the 29 year old will return swiftly on December 3 in Glendale, Arizona.

Nikoloz Sekhniashvili got back to winning ways after a dominant performance over David Rodriguez after the referee waved the action off in the corner before the start of the fourth round, with Rodriguez suffering horrible swelling to the right eye which began from being floored by a left hook in the opening session, Sekhniashvili improving to 8-1.

Montana Love’s older brother Raynell Williams put Ryizeemmion Ford down in the first round on his way to a comfortable points win over six as his return to action continued, getting the nod 60-53 on all three cards and moving to 14-1.

Khalil Coe kicked the action off by registering his fourth win in the paid ranks. Coe floored Bradley Olmeda in the fifth round and looked for the stoppage but Olmeda gamely survived to hear the final bell, where Coe swept the cards 60-53 to move to 4-0-1.