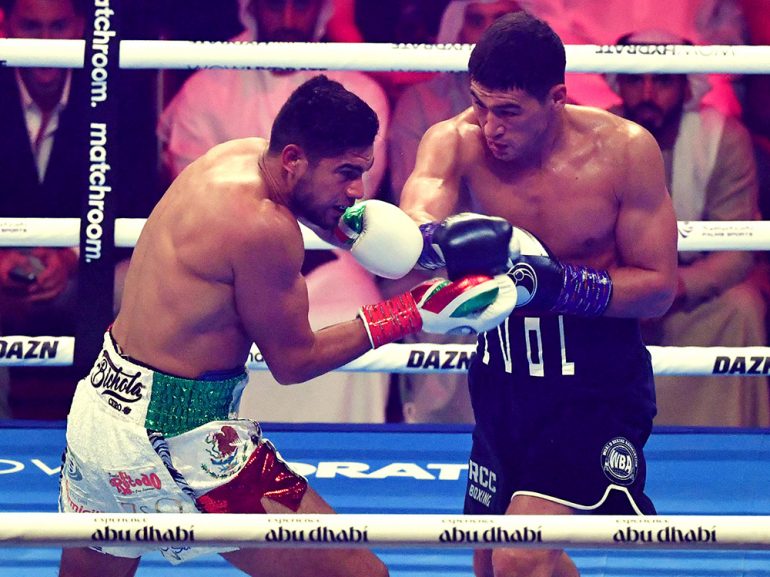 Dmitry Bivol outclassed a game and dangerous Gilberto Ramirez over 12 brisk rounds on Saturday in Abu Dhabi, handing the first pro loss to the physically imposing Mexican southpaw and defending his WBA light heavyweight title for the ninth time.

Bivol (21-0, 11 KOs), who scored a monumental upset over Canelo Alvarez in May, won by scores of 118-110 and 117-111 (twice). The 31-year-old Russian national who trains in Indio, California, outworked, outmaneuvered and outclassed Ramirez, who was unbeaten in 44 pro bouts coming into the Matchroom Boxing main event that was streamed live on DAZN.

Ramirez (44-1, 30 KOs), a former super middleweight titleholder who stepped up to the 175-pound division in 2019, was competitive in spots throughout the fight but was forced onto his back foot early on by unexpected pressure and aggression from Bivol. It was the 6-foot-4 Ramirez, who had won his previous five light heavyweight bouts by stoppage (the last three under the Golden Boy Promotions banner), that was expected to be the aggressor in the anticipated showdown between The Ring’s No. 1-rated light heavy (Bivol) and No. 3 contender (Ramirez).

However, Bivol remained in front of Ramirez for most of the fight, confidently jabbing and dropping one-two combinations on the southpaw, stunning Ramirez as early as Round 4. As the fight wore on, Bivol took firmer command of the pace and action, adding short left hooks and one-two-one combos to his arsenal.

Even when Ramirez attempted to mount a sustained attack and push Bivol back to the ropes during the middle rounds, the 31-year-old Mazatlan native found that his opponent could punch HARD on the fly and is very confident and competent punching and defending off the ropes. Bivol kept Ramirez thinking throughout the fight and he kept him honest by landing punches that visibly hurt him.

It appeared that Bivol was gunning for a late stoppage, although he would not force it. Bivol could stun and rock Ramirez off balance, but he couldn’t drop the Mexican or break his fighting spirit. Ramirez was too big to topple but not too skilled to be outclassed.

At the end of the day, Ramirez is a top light heavyweight; Bivol is a top-10 pound-for-pound-rated boxer (currently No. 7). If you weren’t sure after the Alvarez fight, you know now.

“The lion isn’t the biggest animal in the jungle, but he is king,” Bivol said after the bout, before making his expected declaration of wanting to fight WBC/IBF/WBO unified titleholder Artur Beterbiev for the undisputed championship.