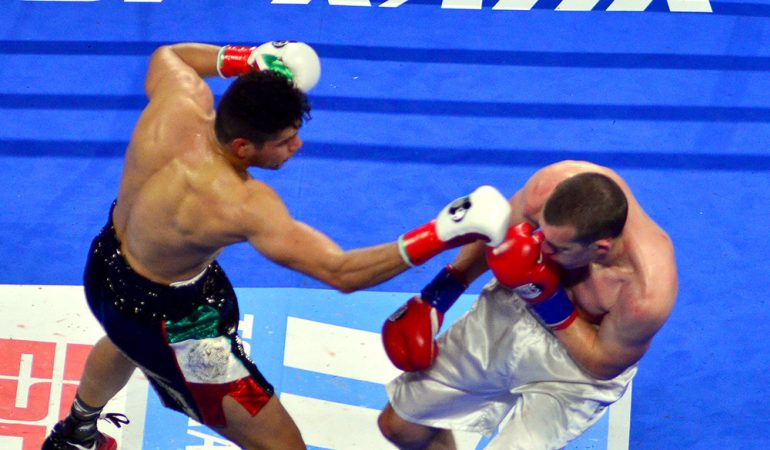 LOS ANGELES – Super middleweight titleholder Gilberto Ramirez may have found a new weight class to campaign in after forcing Tommy Karpency to retire in his corner at the end of the fourth round of their co-feature to the Vasiliy Lomachenko-Anthony Crolla lightweight championship on Friday at Staples Center.

Ramirez (40-0, 26 knockouts), who was making his light heavyweight debut after a three-year WBO 168-pound title reign, hurt Karpency with a concentrated body attack that convinced the well-traveled gatekeeper to call it night before the start of Round 5 of their scheduled 10 rounder.

Karpency (29-7-1, 18 KOs) says his ribs were broken early in the fight that Ramirez was dominating with body-head combinations that were backed by sheer activity.

“That’s what we focused on in training for this fight – body, body, body,” Ramirez said.

The 27-year-old southpaw from Mazatlan, Mexico threw 316 total punches in four rounds, landing 83 – 30 of which were body shots – according to CompuBox stats.

Karpency a former title challenger from Adah, Pennsylvania, landed 25 of 169 total punches. There was probably too much pain from his rib injury to let his hands go.

“In the first 30 seconds of the first round, Ramirez hit me with a good shot that broke my ribs,” said Karpency, who went 12 rounds with then-WBO light heavyweight titleholder Nathan Cleverly in 2012 and was stopped in three rounds by WBC/lineal champ Adonis Stevenson in 2015. The best win of the 33-year-old southpaw’s career was a split decision over former champ Chad Dawson in 2014. He was stopped in six rounds by current WBC titleholder Oleksandr Gvozdyk in 2016, but he managed to drop the Ukrainian standout.

The gritty veteran says Ramirez has a shot of making some noise in the 175-pound division.

Ramirez, who weighed in at 174½ pounds on Thursday (the heaviest of his career), appeared to carry the extra weight effectively with his rangy, 6-foot-2½ frame. He didn’t appear to lose any steam or snap on his punches and his work-rate certainly did not suffer.

“I feel really well,” Ramirez said. “I feel a lot of power (at this weight). I’m more comfortable at 175. I think I’ll stay here. I want to fight all the champions.”

Gvozdyk and Beterbiev are promoted by Top Rank, and Kovalev has a working relationship with the promotional company that is affiliated with ESPN. So, the potential is there for Ramirez to have a series of fights that will be appreciated much more than his rather uneventful 168-pound title reign.