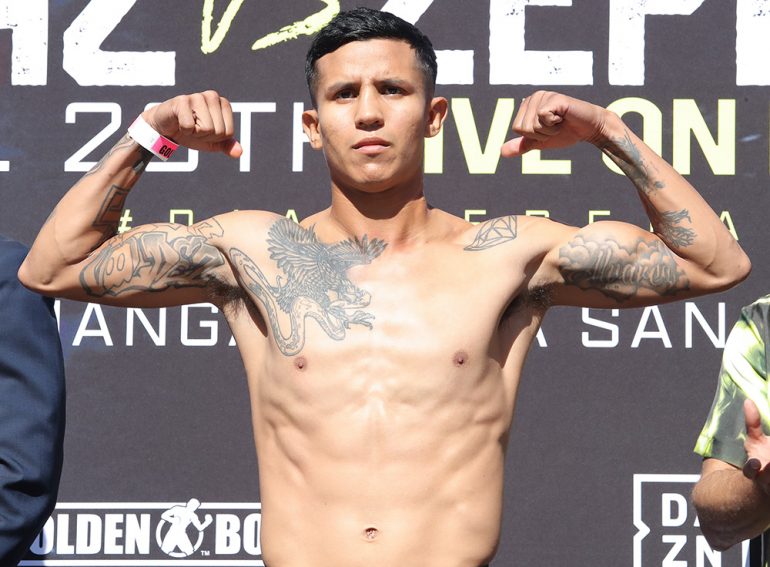 From the opening bell, Ornelas boxed from the outside, moving in and out of Valdez’s range. Valdez would let his hands go more as he closed the distance between the two but would smother himself or would leave himself open to get countered.

Ornelas began imposing himself more at the start of the fourth round, throwing and landing left-right combinations flush to the face of Valdez. Ornelas would capitalize anytime Valdez missed, connecting with a left hook to the head or body.

During the second half of the fight, Ornelas varied his attack. He would throw and land lead right hands to the body. Valdez was able to connect more during the final stages of the fight, particularly during the last round when he had Ornelas on the defensive.

Fighting in front of a hometown crowd, Chavez (4-0, 3 KOs) was dropped by a right cross in the opening moments of the first round. Later in the round, Chavez dropped Leyva with a right hand of his own.

Both fighters had their moments, but Chavez initiated exchanges and landed the more-effective punches throughout the fight. Leyva attempted to counter Chavez, finding some success, but looked tired by the final round.

Featherweight prospect Japhethlee Llamido of nearby Long Beach stopped Houston’s Pablo Cruz in the opening round.

A combination to the head staggered Cruz (22-6-1, 6 KOs). The southpaw Llamido moved in, backing Cruz against the ropes, where he threw and connected with several hooks and crosses to the head. Referee Ray Corona stepped in and stopped the bout at 1:36 after Cruz was not able to defend himself.

In an action fight, flyweight Jan Salvatierra of Los Cabos, Mexico, overcame a knockdown in Round 1 to defeat San Antonio’s Robert Ledesma (3-9, 2 KOs) by unanimous decision. All three judges scored the bout 38-37 in favor of Salvatierra, who improves to 9-2 (4 KOs).

In the opening bout of the Golden Boy Promotions card, junior featherweight Asa Stevens of Hawai’i dropped San Diego’s Mychaquell Shields, who was making his pro debut, once in Round 2 en route to a unanimous decision. All three judges scored the bout 40-35 in favor of Stevens, who improves to 3-0 (1 KO).