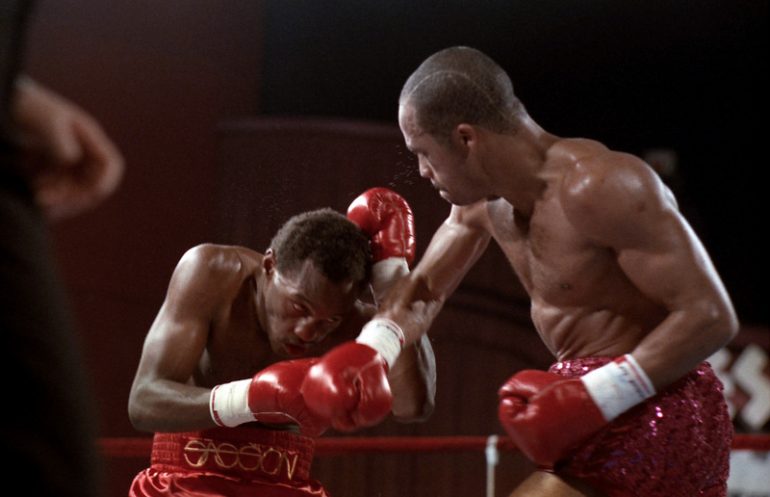 Honeyghan (right) on the attack against Curry. Photo by The Ring Magazine/Getty Images
27
Sep
by The Ring

In terms of British fighters upsetting the odds, perhaps only Randy Turpin conquering Sugar Ray Robinson in July 1951 can match this one.

Honeyghan, a former British, Commonwealth and European champion, was a respected fighter with a 27-0 record. However, the 25-0 Curry has made seven title defenses and was considered by many to be the finest pound for pound fighter in the world.

Some oddsmakers refused to take bets on the fight.

Undeterred by his opponent’s fearsome reputation, Honeyghan exploded out of the blocks fast and took the fight to Curry. The challenger shook his man with a perfect right hand in Round 2 and pressured the American star from bell to bell.

Curry had success in Round 3, when he landed a terrific combination at mid-ring, but the Jamaican-born Londoner was going nowhere and weathered the storm. Another brutal right hand hurt the champion in the fifth and the impossible now looked possible.

A clash of heads opened a cut over Curry’s left eye in the sixth and when he returned to his corner at the end of the session, the Texas-born boxer-puncher shook his head in derision. Following consultation with the ringside doctor, referee Octavio Meyran waved the fight over.

Coming into the bout, Curry was besieged by distractions. The 147-pound limit was becoming problematic and his grandfather passed away. Regardless, this result sent shockwaves through world boxing and was rightly named The Ring’s Upset of the Year.