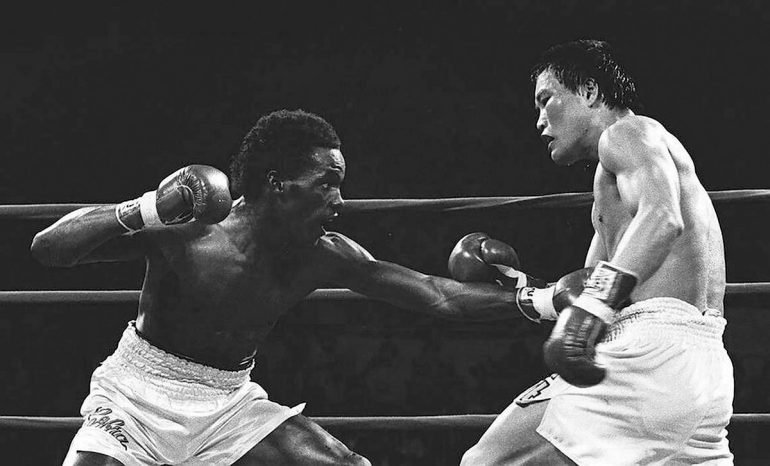 Curry (left) jabs to the body of Jun-Suk Hwang.
10
Apr
by Tom Gray

Editor’s Note: This feature was originally published in the October 2019 issue of The Ring Magazine.

The Lone Star Cobra sank his fangs into the face of his prey.

A near-invisible left hook had struck the tip of Milton McCrory’s chin and sent him to the canvas in a flash. The venom worked quickly, and the stricken fighter’s limbs struggled to obey him. A woozy McCrory somehow managed to push himself vertical, but he was immediately met with the finishing strike – a full-blooded right hand to the skull.

Donald Curry had become undisputed welterweight champion of the world in less than two rounds of action. Hyperbole to one side, that ruthless destruction of McCrory on December 6, 1985, is one of the standout performances in a decade that was packed with them. Curry would share The Ring Fighter of the Year honors with middleweight king Marvelous Marvin Hagler, who scored a third-round knockout of Thomas Hearns in one of the most famous fights in modern boxing history.

At his best, Curry was that good.

The Fort Worth, Texas, native won 400 of 404 amateur contests and would have been favored to claim gold at the 1980 Olympics in Moscow had the U.S. not boycotted those games.

At just 21 years old, the unbeaten Curry captured the vacant WBA welterweight title with a 15-round unanimous decision win over Jun-Suk Hwang, and the sky was the limit. A wonderfully efficient and accurate boxer-puncher, Curry trounced all before him in impressive fashion, leading many observers to label him as the finest pound-for-pound fighter on the planet. The excellent Marlon Starling, whom Curry had beaten once before in a non-title bout, was the only challenger to last the distance.

However, on September 27, 1986, everything changed when an underdog named Lloyd Honeyghan found the antidote to Curry’s poison in Atlantic City. The champion was hurt several times by the London-based Jamaican, who forced the pace and landed consistently with hard right hands to the head. At the end of six rounds, a battered and bloodied Curry sensationally elected to pull himself out of the contest.

Stoppage defeats to Mike McCallum, Michael Nunn and Terry Norris signaled the abrupt end for Curry as an elite-level operator. He had managed to win the WBC junior middleweight title from Gianfranco Rosi but lost it in his first defense to Rene Jacquot in The Ring’s Upset of the Year for 1989.

Curry finally retired in April 1997 with a record of 34-6 (25 knockouts). This year he will be inducted into the International Boxing Hall of Fame, so The Ring caught up with the great ex-champion to discuss six of his notable victories:

“Winning that fight was the greatest feeling in the world at the time. When you set a goal and accomplish it after so many years, there’s nothing that can compare. It was a tough fight, and you have to be at your best at that level. I felt that I was ready to become champion, and I did what I had to do. He got me down in the seventh round and I was dazed, but I was always in control of myself. Hwang took a lot of punishment, but I was there to kick ass. The fight happened a few months after (Deuk-Koo) Kim died (following his fight against Ray Mancini on November 13, 1982), but I had to be professional. You can’t let things like that come into your head. Accidents happen in this sport, and I thank God nothing like that happened in this fight.” 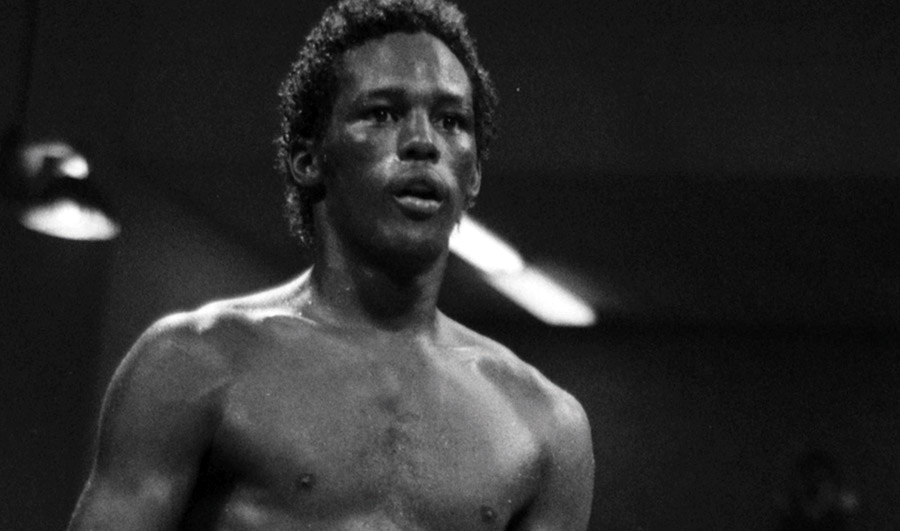 “Oh my God, this guy was considered a really dangerous fight for me. He was supposed to fight Sugar Ray Leonard (in the spring of 1982, prior to Leonard being diagnosed with a detached retina), but it was canceled. He didn’t really have a name, but everyone knew him because he’d been getting ready to fight with Sugar Ray. I felt some pressure to perform, and that helped me get up for work, get in the best shape possible and do what I had to do. I was stunned that I finished him as quickly as I did, and I’m still stunned today. He’d lost a (10-round) decision to Milt McCrory, so I didn’t expect to knock him out in the first round. But I did the right thing; I knocked his ass out as quick as I possibly could and avoided taking any punishment back. I enjoyed Italy; it was like a business vacation.”

“In the first fight, I wasn’t a hundred percent. I had problems making weight and I had management problems. Starling was a tough fighter; he was the second-best fighter in the division along with me. I could box really well, but this guy’s defense was so good. Other guys I could hit and it would be effortless, but he would make me work because he was hard to hit. In that second fight, I did everything I was supposed to do in training and things happened exactly the way I planned. I took the fight to him, whereas I boxed in our first fight. That’s a great attribute to have, when you can change up your game; you’ve got to have that as a world champion. (Marlon and I) still talk about these fights on the phone. In fact, we talked about the fights earlier today.”

“This was one of my best performances. I was backed into a corner, in that I was fighting Colin in England and he was going to be ready for me, but guess what? That means I had to be ready for him. I remember that fight like it was yesterday, and my mind was right for it. I was hitting him good and he was cut up pretty bad around the nose. Some people in the crowd were unhappy because it was stopped on cuts and they’d paid their money. They want to see you smash the guy. But it was a nasty cut and they had to stop it, and the crowd reaction (bottles were thrown into the ring) didn’t intimidate me at all. I was a world-class amateur and I’d fought all over the world. Being part of the American team prepared me for defending my world title later on.”

“He was a good friend of mine, but they made the fight and we had to find out who was best in the welterweight division. We had come up in the amateurs together and we’d seen each other move around. I didn’t really have mixed feelings about beating him the way I did, because I really wanted to win. I beat a guy who was incredible, and I didn’t think I would get him with those shots. But even though the left hook got him, then the right hand got him, I was more overwhelmed by how strong I was compared to him. It might not look it, but I was a physically powerful welterweight. I was hitting him easy and the shots landed, but I was more surprised at how much stronger I was. Both of us were friendly then and we’re still friends now.”

“To be honest, that was one of the worst fights I ever fought. I really didn’t prepare myself physically for him. I did enough to stop him (and score five knockdowns), but that was the first time that I remember my muscles and my body feeling horrible after a fight. I didn’t perform well and I’d lost a lot of confidence by that point. I was going through some things and I didn’t look good. It wasn’t a pretty fight; it was a hard, rugged fight and I was glad when it was over. I stopped him after the ninth round and, being honest, I don’t think I could have gone another round. Rosi was tough and he was a physically strong junior middleweight, and I was a natural welterweight. That drained me, and it’s also possible that I overtrained. As I got older, I was still trying to outrun everybody, and I didn’t rest enough.”

and “Best I Faced: Michael Nunn.”