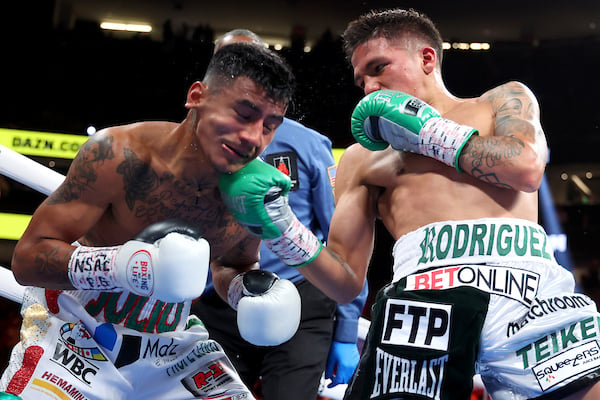 LAS VEGAS — Jesse “Bam” Rodriguez took a six-day notice back in February and made it into the year of a lifetime—so far.

The 22-year-old southpaw from San Antonio, Texas, successfully defended the WBC junior bantamweight title for the second time when he defeated Israel Gonzalez by unanimous decision in the co-feature for the Canelo Alvarez-Gennadiy Golovkin main event on Saturday night at the T-Mobile Arena.

Seven months ago, Rodriguez (17-0, 11 knockouts) could not have imagined being considered the 2022 Fighter of the Year, but that’s the position he’s placed himself in after beating Carlos Cuadras to win the vacant WBC world title on six-days’ notice in February, defending that by topping Srisaket Sor Rungvisai in June and now recording the decision victory over Gonzalez.

Gonzalez (28-5-1, 11 KOs) proved to be a little tougher than Rodriguez anticipated.

In the opening rounds, Rodriguez burrowed in on Gonzalez, who tried holding him off with his height and longer reach.

With 2:37 left in the fourth, Rodriguez plowed Gonzalez with a straight left to the face, which snapped the challenger’s head back. Gonzalez tried a body attack, and with slightly less than two minutes left in the fourth, referee Kenny Bayless warned him about low blows.

Gonzalez did well mixing his attack, working the body and the head. He even tagged Rodriguez with a right uppercut to the side of his head.

Through four, both fighters were relentless.

Rodriguez did well working out of the crouched position. He left Gonzalez little landscape to work with, though the times when Rodriguez was upright, Gonzalez scored to the body.

Through six, it was very easy to see the fight 3-3.

With 2:14 left in the eighth, Bayless called timeout to look at Gonzalez’s left eye after the fighters’ heads collided. The ringside doctor took a brief look and action resumed. 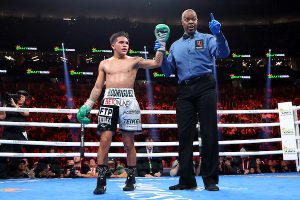 In the eighth, referee Kenny Bayless took a point from Jesse Rodriguez for a low blow against Israel Gonzalez (Photo by Ed Mulholland/Matchroom).

Rodriguez took a more tactical approach in the eighth. He did not wade into Gonzalez as in the previous rounds, instead staying back and pecking away.

With :14 left in the eighth, Bayless took a point way from Rodriguez for a low blow. Bam had unfurled a right that caught Gonzalez just below the waistband of his trunks. Gonzalez fell to the canvas in distress, and Bayless quickly intervened to take a point from the defending titlist.

With 2:23 left in the ninth, Rodriguez ripped a three-punch combination off of Gonzalez, whose activity seemed to wane in the previous two rounds. Bam popped Gonzalez with two left uppercuts to the head.

Sensing the fight slipping from him, Gonzalez came back at Rodriguez, moving forward and using his reach again, tagging Bam as he neared. Rodriguez, however, did close the 10th strong, pinning Gonzalez against the ropes and landing several combinations.

With :53 left in the 11th, Rodriguez hit Gonzalez with a blatant low blow with a right far below the belt this time. Once again, Gonzalez crumpled to the canvas. Bayless, however, did not penalize Bam a point for a right that was more egregious than the foul he got called for in the eighth.

With his left eye swelling shut, Gonzalez started the last round strategically striking Rodriguez to the head and body. With 1:26 left in the fight, Bam nailed Gonzalez with a couple of looping lefts. With :38, he strafed Gonzalez with a straight left against the ropes.

As the final bell sounded, it was easy to see the fight was far closer than two of the three scorecards would eventually indicate.