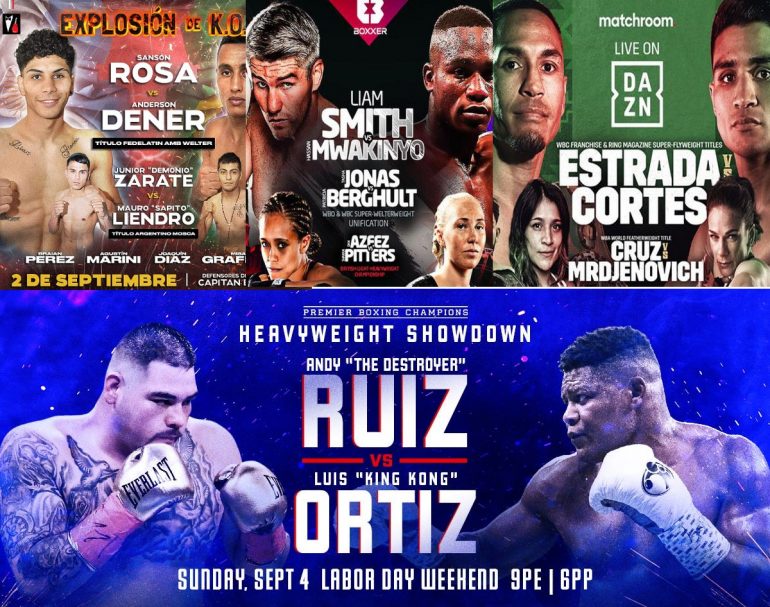 Rosa will put his unbeaten record on the line against an upset-minded Brazilian trialhorse in an intriguing bout. Not a bad way to start the weekend.

Where to watch it: TyCSportsPlay

Smith makes his debut with promotional outfit Boxxer with an eye on bigger challenges ahead – but Mwakinyo could prove a more difficult test than what he had in mind.

With Ring queen Claressa Shields staying at middleweight and eyeing a run at 168 as well, the search is on for a new No. 1 at the division, and this WBC/WBO unification should give us some clues about who’s the next top 154-pounder in women’s boxing.

Where to watch it: SkySports

Mexico’s Estrada remains one of the best in the game, and even though Cortes is far from being a serious threat to his Ring championship run, the chance of seeing one of the best fighters in the lower divisions in action should be enough for everyone to tune in.

High-stakes rematch for both of these phenomenal combatants. The first one was a bloody affair, with Cruz winning a war of attrition, but Jelena has the tools and the discipline to turn things around in her favor, even in the most hostile possible environment.

What to expect in this fight: With a possible career-defining bout against pound-for-pound fellow titlist Amanda Serrano on the line for the winner, expect this clash to be just as good as the first one.

Unbeaten prospect Bell will be trying to make his case for a title shot in this homecoming bout against Dominican Republic’s Polanco, a solid fringe contender looking to bounce back after a couple of setbacks.

Where to watch it: FITE

Former champ Ruiz has looked just OK against Chris Arreola since losing his belts against Joshua in a rematch, and Ortiz is looking for the one defining fight that will make him worthy of another shot at a legit heavyweight belt – and not the interim trinket he once held. Two big-punching Latino heavyweights in bad need of a signature win? Get that popcorn going!

The ineffable “Pitbull” Cruz is always entertaining to watch, and his burning desire to bounce back from his loss to Gervonta Davis should be enough to make this battle of twice-beatens an entertaining one. And Ramirez is no slouch either, having lost only to top opposition in a solid career.

Former three-weight champ Mares has his own reasons to return to the ring after a long hiatus, but it’s difficult for us to agree with him. We hope he proves us wrong in this 10-rounder.

Where to watch it: Fox PPV