In a Ring Exclusive, Abner Mares explains why he’s coming back after four years on Sunday night 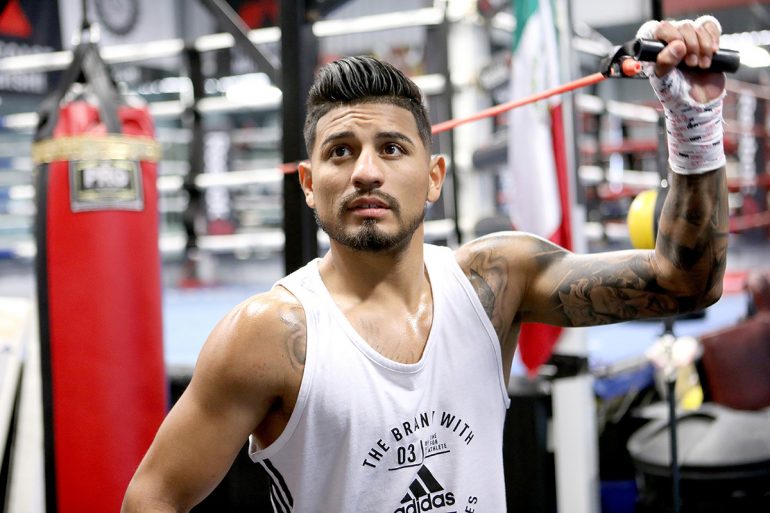 Abner Mares, to those on the inside of boxing, know him as one of the sport’s good guys, in a game not filled with many. The 36-year-old Mares once held the IBF bantamweight title, the WBC junior featherweight belt and WBC featherweight title. He was one of boxing’s illuminating figures with an unimaginable backstory. The 2004 Mexican Olympian was homeless for a portion of his childhood, subsisting on days-old, expired food from industrial garbage bins behind large grocery stores. His heaven used to be licking dripping gooey chocolate from his hands. He would cry himself to sleep from hunger pains.

Mares (31-3-1, 15 knockouts) has not fought since dropping a unanimous decision to then-WBA featherweight titlist Leo Santa Cruz in June 2018. On Sunday, Mares will be back, making his junior lightweight debut against Miguel Flores (25-4, 12 KOs) on the Andy Ruiz-Luis Ortiz undercard in a 10-round fight in a PBC event on FOX Sports pay-per-view (9PM ET/6PM PT) from the Crypto.com Arena in Los Angeles.

In late-January 2019, Mares underwent surgery on his right eye to repair a detached retina he injured after successive sparring sessions. The injury forced a cancellation of his fight against Gervonta “Tank” Davis in a Showtime main event in February 2019. When Mares injured his eye, he quit boxing and over the last few years has dabbled in broadcasting, serving as one of Showtime’s color analysts.

Everything seemed well around him.

I don’t have to prove anything to the other guy. I’m fighting because I’m getting an opportunity. I’m getting this chance on pay-per-view to showcase once-upon-a-time who I was. I know the instructions my corner has. It’s not about how good I have to look; I’m going out there to give a show.

He looked like his break with boxing would be clean and he would be able to walk away without any nagging regrets.

“It’s as simple as I’m getting another opportunity and I’m capable of still fighting,” Mares said. “I’m capable of still doing something. I would not be taking a risk if I knew I couldn’t (fight) anymore. I’ve been training for a while, twice, three times a week. I want to go out on my own shield. All my fights throughout my career, I wanted to fight to impress, I wanted to fight to get money, I always wanted to prove I was better than the other guy.

“Now, I don’t have to prove anything to anyone anymore. I’m fighting because I’m getting an opportunity. I’m getting this chance on pay-per-view to showcase once-upon-a-time who I was. I know the instructions my corner has. It’s not about how good I have to look; I’m going out there to give a show.”

Mares says his right eye is “good.” He admits it’s not the same as it was before he got injured.

The biggest concern is Mares’ health. Can his mature bones deal with the punishment he used to be able to endure, especially in training?

No one in boxing wants to see anyone get seriously hurt—especially someone like Abner Mares.

“I know the risks,” he stressed. “I know what I’m in for. My corner has strict instructions that if they see I’m getting hit more than I should, or I’m getting injured, they’re ordered to stop the fight. I’m not there to prove anything. I’m there to have fun. I know I’ve been out for four years. I have been training since this whole time out. Everything is mental. Sometimes my body fatigues, and then I get my ass back in the gym and it goes away.

“I’m happy the way my body has been responding. I do know I’m not the same fighter I was before. But I am sparring a lot younger guys, and I’m sparring eight, 10 rounds. Boxing is about finding your spots and picking your spots to shoot.”

I’m going to be a fighter the rest of my life until I die. That’s a big part of this. No one is going to separate me from who I am. It’s why I say that I’m doing this for me. You can say that I still have stuff in my basement that I need to address.

Flores does not pose much of a threat, having lost two of his past three fights, including a unanimous decision to Santa Cruz in November 2019. But Flores has fought four times over the last four years. He carries some edge, though not much power.

Mares has been training with Manny Robles’ assistant trainer, Edgar “Estrellita” Jasso. The father of two daughters, one 16, the other 11, also had to answer to someone more important than him, or the boxing media, or the FOX Sports executives—Mares had to answer to his wife, Nathalie.

He presented his comeback idea to her at home. It was like wanting to go out with the guys when you get super nervous to ask the wife if it’s okay.

“I’m not hiding this, and I haven’t been hiding this, my wife didn’t want me to fight, my kids didn’t want me to fight, but it’s not about anyone else right now, I’m doing this for me,” Mares said. “My wife basically asked me why? Anyone who loves and cares about you understands what you’re passionate about. If they do love and care about you, they’re going to back you up. My family is on this.

“This is most likely a one-and-done deal. I’m not trying to come back and make a career. I’m not calling out any big names. I’m truthfully not at their level. I’m fighting and that’s it, and I’m done.”

“I’m going to be a fighter the rest of my life until I die. That’s a big part of this. No one is going to separate me from who I am. It’s why I say that I’m doing this for me. You can say that I still have stuff in my basement that I need to address. I don’t think this version of me could beat the young version of me. That guy who threw 200 punches a round is not me anymore, but I could outsmart the young Abner.

“I’m talking to my corner. I’m even going to talk to the referee that if there is any sign of trouble, I want them to stop it.”