ATLANTIC CITY — It was the ring return that Thomas LaManna was not sure would ever happen. After suffering a disheartening defeat to Erislandy Lara in May of 2021, the boxer-promoter from Millville, N.J. ballooned to 240 pounds as he battled depression.

LaManna worked the weight off, and returned to the ring on Saturday, defeating the experienced Saul Roman by unanimous decision in a super middleweight bout at Boardwalk Hall in Atlantic City, N.J.

By the third round, LaManna was already feeling good about his form, talking to ringside observers as he landed pinpoint pot shots on Roman’s face. By the fifth, Roman was on the canvas, overcome by the accuracy and aggression of the suburban kid who opted to follow his boxing manager father Vinny into the hurt business.

Roman (46-16, 38 KOs), who had been stopped in 12 of his 16 losses over his 22-year career, survived on experience and grit as LaManna rushed to jump on his hurt opponent.

LaManna admits he still has plenty of work to do to get back to fighting form.

“I had him hurt, I just second guessed myself and my conditioning while trying to finish,” said LaManna, who promoted and main evented the card.

“I always knew I was better than [Roman], I knew I had more skill than him, it just came down to me believing in myself and putting it together.”

LaManna says he expects to be back in the ring next month in Colombia, this time at his usual fighting weight of 160 pounds.

The show was the second this year at Boardwalk Hall for LaManna’s Rising Star Promotions, which he had co-founded with his mother Debra LaManna in 2015 as a vehicle to move his career. The company has become the most active club show promotion in New Jersey, with their next show date targeted for November 12 at The Showboat casino in Atlantic City.

If the main event was about celebrating the return of a Jersey local favorite, the undercard was a proving ground for the Garden State’s next generation of prospects.

Emmanuel Rodriguez turned in his most explosive performance to date as a professional, starching Frank Gonzalez at the 27-second mark of round 4 in their ten-round bantamweight bout. 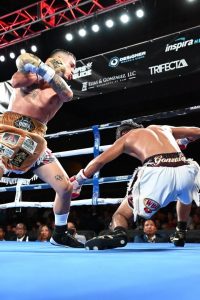 Rodriguez, known as “Salserito” for his habit of dancing merengue in the gym in Newark where he learned to box as a young child, entered the ring wearing attire inspired by his Taíno heritage as a native of Quebradillas, Puerto Rico.

The 29-year-old Rodriguez is now rated no. 13 by the WBA at 118 pounds and is likely to advance in the WBO’s ratings after adding the WBO Latino title tonight.

Anthony Johns (4-0, 3 KOs), a 2019 National Golden Gloves champion from Newark, was extended the full distance for the first time as a pro, outpointing the durable, crafty Jerrod Miner (2-15-2, 1 KO) by unanimous decision. One judge found a round to give Miner, scoring the bout 39-37, while the other two had it a shutout at 40-36.

Johns, who fought at 108 pounds as an amateur, once again fought a much bigger fighter, weighing in at 113 pounds against the 118-pound Miner. Miner’s size and experience likely helped him survive the rough parts, as he held on in close while Johns tried to pound away.

Johns, 29, showed he had the strength to wrestle in close against Minr and stunned him on several occasions with right hands.

Jose Nieves was looking to get a little more ring time after blowing out his previous opponent in 26 seconds. Nieves (4-0, 2 KOs) got four solid rounds and more out of Juan Sequeira as he survived his first career knockdown in a unanimous decision win in their junior featherweight fight.

All three judges scored the bout 39-37 in favor of Nieves, 22, of Woodbridge, N.J., who dominated every moment of the bout, save for the single right hand that put the off-balance southpaw on the canvas in round two.

Nieves came back with a vengeance, bloodying the Nicaraguan boxer Sequeira (1-1) with piercing left crosses and uppercuts. The right side of Sequeira’s face was covered in blood in the fourth round, while Nieves had a cut on his scalp due to a head clash. 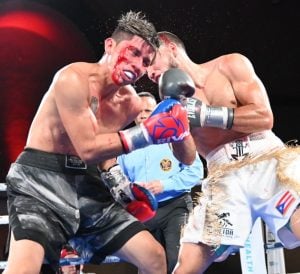 Nieves, who was born in Aibonito, Puerto Rico, is trained by his father Jose David Nieves out of Park Elite Boxing Academy in Roselle Park, N.J.

Derrick Vann pulled off the first upset of the night, outfighting Paul Bamba to a split decision win in a four-round light heavyweight bout. Vann (2-4) of Philadelphia used long-range combinations and a heavy right hand to knock Bamba’s (4-2, 3 KOs) head back repeatedly, sending the New Yorker’s untied braids flapping around.

Vann’s biggest struggle was with an ill-fitted mouthpiece, which came dislodged in round 3. The referee deducted a point despite there being no prior warning. Bamba made one last rally but was outgunned.

Kurt Scoby (7-0, 5 KOs) made quick work of Floridian Raul Chirino (19-16, 12 KOs), dropping Chirino three times en route to a first round stoppage. Scoby, 26, of New York by way of Duarte, Calif. overwhelmed Chirino with pressure, scoring the first knockdown on a body shot and the second with a right, before finishing the fight at the 2:03 mark with a double left hook.

Scoby, who is trained by Don Saxby at Gleason’s Gym in Brooklyn, played division II football at Azusa Pacific University.

Justin Figueroa drew an enthusiastic crowd in his hometown for his pro debut, but the 50-fight amateur veteran had to help his foe with a wardrobe issue just to get the fight in the ring.

Tavaris Smith (0-6) found himself without his boxing shoes, but luckily the junior middleweight Figueroa also wore size 11 shoes and had an extra pair in his bag.

The 23-year-old Figueroa made the most of the opportunity, stopping Smith at 1:34 of the first round.

Figueroa, who works as a lifeguard, is managed by Jolene Mizzone of Fighters First Management.

The show opened up with Avious Griffin (9-0, 8 KOs) blasting out an overmatched Ramon Marquez (4-2, 4 KOs) in round two of a six-round welterweight bout. The 28-year-old Griffin of Chattanooga, Tenn. scored two knockdowns against Marquez of Bowie, Ariz., finishing the bout without a count at the 2:49 mark.