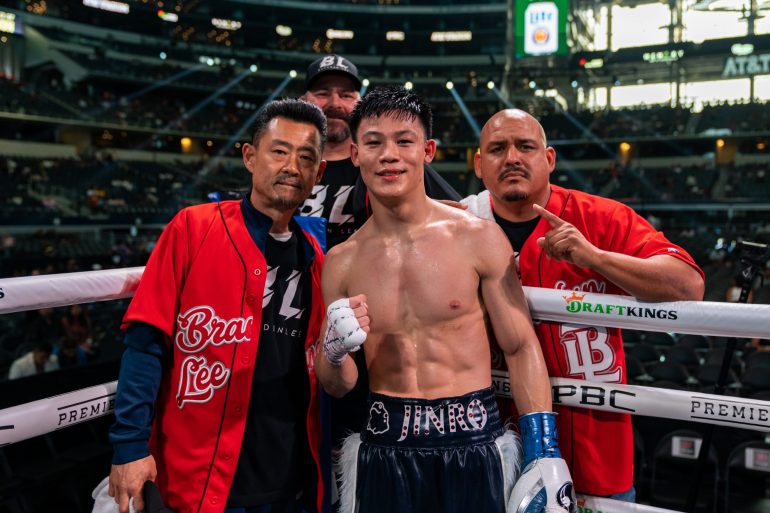 Lee, who was awarded The Ring Magazine Prospect of the Year, in 2021, hopes to continue to build on that momentum.

“[Madera] is a very explosive fighter. I would say he’s the most skilled fighter I would have fought,” Lee (25-0, 22 knockouts) told The Ring.

The 23-year-old power-puncher had been due to fight on the undercard of Jake Paul vs. Hasim Rahman Jr. on August 6. However, when that fell through, Lee’s fight was moved back.

“It was unfortunate news when I found out the fight had gotten canceled,” he admitted. “The way I look at it, everything happens for a reason. With the postponement, I had another two weeks in the gym that only made me sharper. One day I will fight at MSG [Madison Square Garden]; hopefully I even headline. Until then, we’re taking one fight at a time.”

Lee kicked off the year by widely outboxing the reluctant Zachary Ochoa over 10 rounds on the undercard of Errol Spence Jr.-Yordenis Ugas, on April 16.

“I was there to fight; he was there to survive,” said Lee. “I wanted to give the fans a great show and great fight. I felt like as soon as he felt the power, he was on his bicycle.

“I learned a few things in that fight. To be more aggressive cutting the ring off and [being] more physical. Little stuff that can make a big difference. That is in the past. I won easily and on to the next.”

However the California native was pleased to go 10 rounds for the first time and now intends to make a statement against Madera.

“Absolutely. I’m going to go out there and win every single round and make it a complete shutout. I’m going in there to win. If a knockout comes, it comes,” he said. “My last fight, I went 10 rounds, so I have no problem going another 10 rounds.

“The knockout streak has ended, so, if I knock this guy out, great. If I don’t knock the guy out, great. At the end of the day, as long as I win and win in a dominant way, that’s all I want.”

Lee is inching his way toward facing the best fighters in the talented junior welterweight division.

“I want to start facing the top-15 guys,” said Lee. “I’m getting closer and closer. I’m going to show the boxing world that these guys aren’t anything compared to Brandun Lee.

“[Ryan Garcia and Teofimo Lopez] are just opponents to me. They’re not kings; they’re not God. They’re human just like I am; they bleed just like I do.

“The way I look at that fight [with Ryan Garcia] is like Oscar De La Hoya against Manny Pacquiao. How many people it drew because of the fighters [involved]. I’m not looking at him and I say that because I want them all. I have my eye on everyone at 140 pounds. Put them all in front of me; I don’t care.”

Madera turned professional in 2013. The New York native won his first 11 contests before back-to-back draws with Wesley Ferrer (D 8) and Alberto Morales (D 6). The 31-year-old edged past previously unbeaten Thomas Mattice (UD 8) and was held to a draw by Christian Uruzquieta (D 10) before losing his unbeaten record to once-touted Felix Verdejo (TKO 1). He has won his last two fights and heads into this bout with a record of 17-1-3 (10 KOs).

Lee-Madera will open the Showtime broadcast headlined by Omar Figueroa vs. Sergey Lipinets. The broadcast will begin at 8 p.m. ET/ 5 p.m. PT.