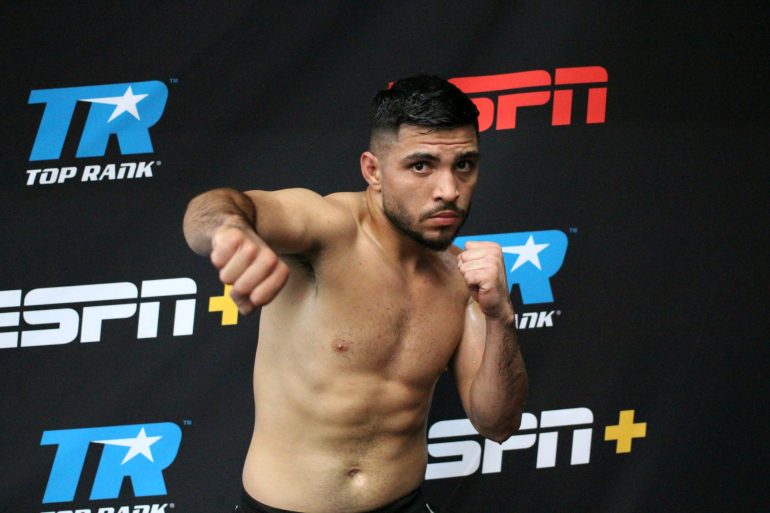 It happened before them both. One as a witness, the other as the subject. There was promise there. A lot of potential. Brothers Luis and Andres Cortes knew it and recognized it at an early age.

Luis was going to go somewhere in boxing. He had speed. His hands were quick. He had some power. He also liked to smoke weed and didn’t like to run countless miles each morning. Andres would see his older brother toil during sparring. Andres, around 12 at the time, would watch Luis’ slow demise.

Luis was accountable. He knew he squandered what he could have had. He also knew he was not about to let his younger brother Andres fall into the same traps he did.

It’s worked quite well so far.

Andres is riding a three-fight knockout streak, including stopping Genesis Servania for the first time in his career on a first-round knockout. Andres, 25, is a rising contender with huge talent and higher aspirations. He’s also gifted with a walking, talking reminder of the trapdoors the lack of discipline could lead to in Luis, who’s his manager and trainer.

“Andres saw it all the time,” said Luis, who’s 30 and sounds like he’s 18. “I had a passion for boxing, but I didn’t have the guidance. I would come home four, five in the morning from the night before, and I would pass out on the couch. When I was 20 and Andres was 15, we lived with each other, and he was very responsible. He woke up on his own and went to school on his own, and that made my brother very mature.

“The housing market killed our family. We lost our home and our parents decided to move to North Dakota for work. I got a job, and I had a responsibility, my brother that I never had before. I lost discipline. I had no guidance. I had to do a lot of growing up, and at that point, we were amateurs. He learned together.”

What inspired the Cortes brothers was current Ring and world lightweight champion Devin Haney. Haney, just 23, traveled to Mexico early in his career to turn pro at 15.

Andres initially signed with Mayweather Promotions for a three-year deal, and that deal ran out, making him a promotional free agent. He signed with Top Rank in March 2022.

Andres and Luis were introduced to boxing by their mother, Angelica Coro, who felt boxing was a great way for her sons to expend their high-octane energy. Andres was 4 and Luis was 9. It was an instant love affair at Barry’s Boxing in Vegas.

“At a young age, I really didn’t realize what it was, but I was always active as a kid and I would say I started to feel I was really good at it around 8 going to tournaments,” Andres said. “I felt I was naturally good at it. Luis was very good, a multi-national amateur champion. He relied a whole on his natural ability, but I’m a little different. I love to run during my downtime. I love working out. We’re two different types of people. Luis wanted a lot of things at once when he was younger.

“It can be hard to juggle all that at once. I truly believe everything happens for a reason. Early on, I loved working outside of boxing. It’s something Luis never liked. I’ll run five, six, seven miles on my own time. I never liked the party life. He did. I saw my brother go from a really, really good fighter when I was 12, 13, and the consequences his lifestyle took on him.”

Luis had a smart style, a good counter puncher and Andres is an aggressive counter puncher, and someone who the lightweight class better pay attention to in the coming years.

As for Montoya, Luis said he’s had him on his mind for some time.

“I know who he is, and he knows who I am,” Andres said. “He’s a tough guy and I know he’s going to bring it and make this dirty. I think I have what it takes to knock him out. He is a good fighter. Servania dropped (then WBO featherweight titlist) Oscar Valdez and had never been stopped before, and I stopped him in the first round. I’ve been in this position before.”

Luis sees a world title belt one day being wrapped around his brother’s waist.

“When my brother stopped Servania, that changed everything,” Luis said. “Montoya could make this ugly, but he is relentless and throws a high volume of punches. My brother wants to showcase his skills and I know he will.”