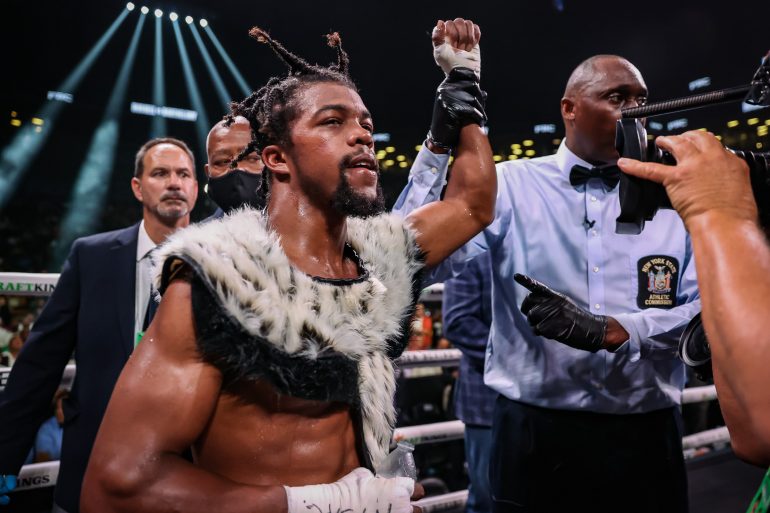 Barthelemy, a former two-time titlist, was going to pose the biggest threat to Russell in his budding pro career. He was also supposed to be “Rances Barthelemy,” a known runner who’s known not to engage.

The fight also marked the first time junior welterweight Russell was fighting as a pro without his father, the late Gary Russell Sr., in his corner who died in May at the age of 63 after years of struggle with Type 2 diabetes and several minor strokes.

Russell (16-0, 16 knockouts) kept his knockout streak alive by stopping Barthelemy (29-2-1, 15 KOs) for the first time at :50 of the sixth round—though it came with the caveat of ending under controversy, when Barthelemy appeared like he was able to continue.

“I want to tell my father up above I did it for him, we’re going to keep it going for pops, I want to thank showtime for letting me participate,” Gary Antuanne said. “I know Rances was a high-grade class athlete and he wanted to continue. Emotions were high. Whether we or bruised or beaten, as a warrior, you always want to continue but the referee was doing their job and if he was allowed to continue it would have been the same outcome.  I would have gotten him.

“It’s the first of many [without my father] I had to have tunnel vision. This is something my dad instilled in us, no matter what you go through in life and death, two things are inevitable, he raised us to be men and well-rounded men. Being thorough means to be prepared, and he prepared us for boxing and for life outside of boxing. I thank my father and I did what I had to do.”

Barthelemy, obviously, felt he could have gone on.

Barthelemy exchanged with Russell at the outset. It was a complete change from his past. With :47 left in the first round, Barthelemy landed a right on the jaw that stunned Russell.

Working from the southpaw stance, Barthelemy began doing damage with lefts. As the fourth round ended, he banged Russell with another strong left. The southpaw stance, which Russell never faced before, seemed to create some openings in Russell’s defense. 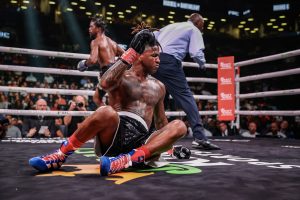 Rances Barthelemy was knocked down for the third time and stopped for the first time by Gary Antuanne Russell (Photo by Amanda Westcott/Showtime).

A leaping Russell right hook that connected on Barthelemy’s jaw with 2:27 left in the sixth changed everything. Barthelemy suffered the third knockdown of his career.

“In the sixth round I had him backing up, I knew he was looking for his right cross,” Russell said. “I caught him backing up and I shot my hook and put him down, he was buzzed but he wanted to keep going. He’s a warrior.”

Referee Shada Murdaugh decided to end it at :50 of the sixth round.

“I’m unhappy, this was a good fight these fans paid good money to see, how can you take this opportunity away, he’s been down before and gotten up,” said Orlando Cuellar, Barthelemy’s trainer. “He’s fought on. You’re supposed to give your fighter every opportunity to continue. The referee took away the chance for both to show their character, for Rances to continue and for Gary Antuanne to show his character by fighting on in a hard fight. You robbed the fans. We want a rematch but with a different referee.”

In the 10-round heavyweight clash between Adam Kownacki (20-3, 15 KOs) and Ali Eren Demirezen (17-1, 12 KOs), Demirezen upped his winning streak to six-straight victories with a 10-round unanimous decision.

“I overcame adversity,” Demirezen said. “We were both equally aggressive. I promised everyone a win, and that’s what the people got. I beat him in his hometown. “I want to be an inspiration and a role model for Turkish youngsters that were watching tonight. I hope I made them proud.

“I was nervous because he’s a strong fighter and I could be much better but it’s my first time here and he’d fought here before.”

Suffering his third-straight loss, Kownacki had said before the fight, “If I don’t win this fight, I lose it all.”

“I’m a bit rusty, I think he was getting off first in the exchanges, I didn’t’ sit down as much, I think the rust played a part, being out so long,” Kownacki said. “I was out of the ring since last October, camp was good but I don’t know, I was letting him get off first, I wasn’t moving my feet, I went back to the old me instead of the first few rounds when I was doing good.”

Loser of four of his last five fights, including three straight, Sergiy Derevyanchenko (14-4, 10 KOs) snapped his slide with a 10-round unanimous middleweight decision over Joshua Conley (17-4-1, 11 KOs) on the undercard.

Junior middleweight Dwyke Flemmings, Jr. (2-0, 2 KOs) stopped Angelo Thompson (0-4) at 2:32 of the second round of a scheduled four-rounder.