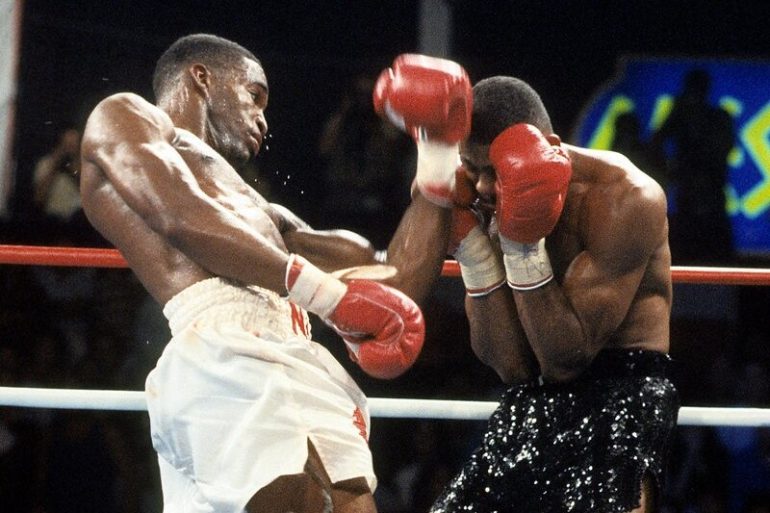 Nunn (left) teeing off on Frank Tate. Photo by The Ring/ Getty Images
28
Jul
by The Ring

He carried one of the best ring monikers in boxing history.

On July 28, 1988, Michael “Second to” Nunn scored a comprehensive ninth-round stoppage over Frank Tate to win the IBF middleweight title at the Caesars Palace Sports Pavilion in Las Vegas. The official time was 0:40.

Tate, who won two of three fights against Nunn in the amateur ranks, was a former Olympic champion from Los Angeles 1984. Unbeaten in 23 fights coming in, the Detroit-born technician defeated Michael Olajide to win the title and had defended once against Britain’s Tony Sibson.

Nunn, from Davenport, Iowa, was unbeaten in 30 fights with 20 KOs. Despite a respectable knockout ratio, the southpaw challenger had picked up the unfair reputation of stick and move spoiler. But he was a bigger puncher than given credit for.

On the night, Nunn was dazzling. Shirking the “dancer” label, he stayed in front of Tate and continually beat him to the punch.

Late in Round 8, Nunn dropped his man with a whipping left hand to the mid-section. Tate made it to his feet – just – but he was still hurt when the bell rang for Round 9. Nunn sensed his opponent’s predicament and a quick two-fisted burst prompted referee Mills Lane to stop the fight.

“I became the mandatory challenger and they had to fight me,” Nunn told The Ring years later. “It was a good fight, but it was not competitive. I was the boss until I stopped him – I was quicker than him, faster than him; I landed the most punches; I was leading on all the cards.

“This was the second-to-last 15-round championship in boxing. We prepared in Big Bear, California. I celebrated the win with my mother and family and my manager Dan Goossen and great trainer Joe Goossen. A lot of people from my community, they flew out to support me.”