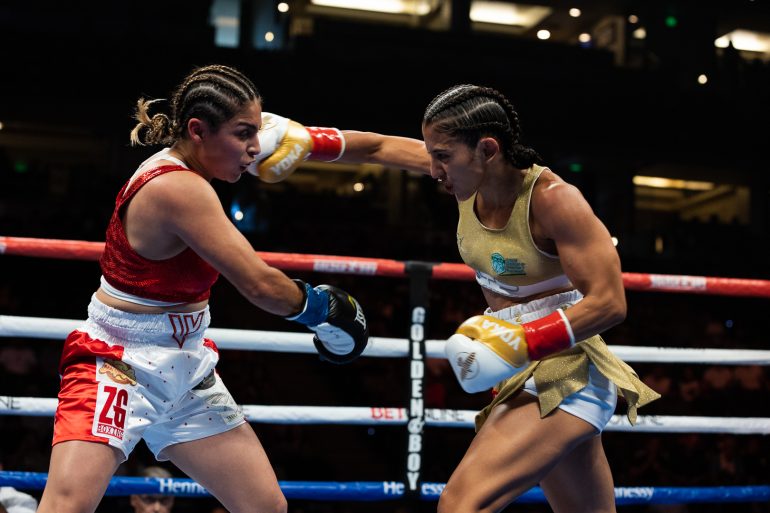 The 10-round world championship fight, which is presented in association with MarvNation Promotions, will take place at Ciudad Deportiva Heiner Ugalde, Hatillo, San Jose, Costa Rica and will stream live on DAZN and on the Golden Boy Boxing YouTube page starting at 6:00 p.m. PT / 9:00 p.m. ET.

“When I signed with Golden Boy, I thought that there could be nothing better, my childhood dream was coming true. But it turns out that with the hand of God and the support of Oscar De La Hoya and Golden Boy, today I am surprised once again, with the opportunity to be able to show the world that Costa Rica supports its athletes. I can promise all of my fans and Costa Rica that I will give the fight of my life against a great rival, the WBO World Champion Thi Nguyen, who is an internationally recognized boxer,” said Yokasta Valle.

“I know this fight is going to be a war of champion versus champion, unifying world titles, all or nothing! The only difference is that she is going to have to come to my house to face a ‘Yoka’ more motivated than ever! With the support of my people, who I am sure will make their presence known with their incredible support, I WILL MAKE THE HOUSE BE RESPECTED!!!,” continued Yokasta Valle.

“I am very excited about this fight and the opportunity to be a unified world champion,” said Thi Thu Nhi Nguyen. “I am going to win this fight no matter what. I will be the hero of Vietnam; it is my honor to represent my country and the women of my country. I have been training every day to make this an exciting, action filled fight and deliver a KO victory.”

Ranked as one of the best female 105-pounders by ESPN.com and The Ring Magazine, Yokasta Valle is a world champion in two weight classes. She captured the IBF Atomweight World Title in 2016 and has held the IBF Minimumweight World Championship since 2019. The Costa Rican fighter has been undefeated since 2018 and has made five successful world title defenses. Valle was named 2021’s “Female Fighter of the Year” by the International Boxing Federation. Now, the world champion is looking to unify the division against any world champion up for the challenge.

In 2021, Thi Thu Nhi Nguyen made history as Vietnam’s first boxing world champion when she captured the WBO Minimumweight World Championship against Japan’s Etsuko Tada. Her burgeoning boxing career was a surprise to most boxing spectators as Nguyen has been able to prove to the world that she is a force to be reckoned with in the sport.

Her first big opportunity came in 2020, Nguyen when defeated Kanyarat Yoohanngoh and captured the vacant WBO Asia Pacific Minimumweight title, something that set her up for the world championship face off against Tada in 2021. Nguyen was able to use boxing as her avenue out of poverty in Ho Chi Minh City, but, as a result, she also faced tough criticism as boxing and athletics in general are not cultural norms for women in Vietnam. Now considered an icon of national pride, the world champion is paving the way for women in boxing and sports in Vietnam.