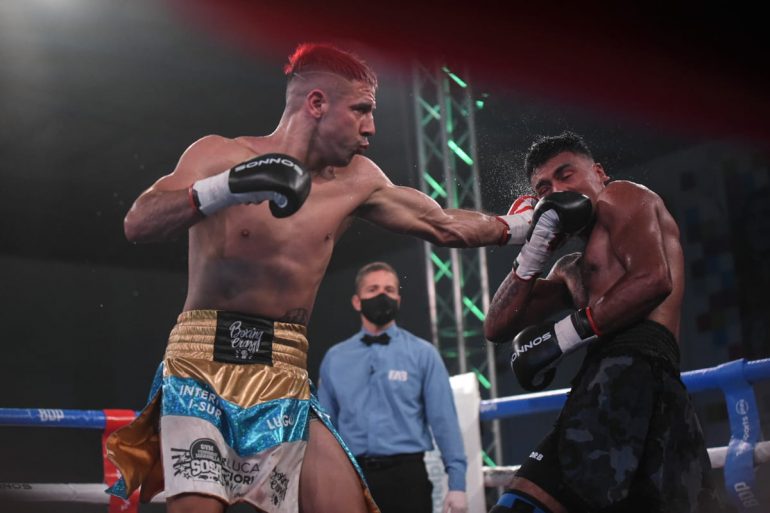 The build-up for any fight is a source of stress for any fighter, especially if it’s the first fight abroad for him. But it is more so for Argentina’s Lucas Bastida.
Bastida (18-1-1, 10 knockouts) will be taking on England’s Josh Kelly (11-1-1, 7 KOs) on Saturday 30 July at the Vertu Motors Arena in Newcastle, in what will be his first fight outside his country. But before that, he had to endure a few setbacks that put his career in danger.

“That was just an injustice,” said Bastida, referring to an incident in early 2021 in which he was falsely accused of sexual abuse and spent 10 days in jail before being “irrevocably” exonerated. “But the important thing is that I was able to see the support of all my team, of all the people that support me and love me, and who know who I am. I will stick with those people for the rest of my career. I believe that what doesn’t kill you will make you stronger. We came out of that with a different perspective. We are using this new opportunity that life has given me to move forward.”

That was not the only roadblock in Bastida’s personal life. He also had to deal with an attack with a butcher’s knife by a group of muggers.

“It was around 5 years ago when someone tried to rob me, and they stabbed me in the arm which cut three tendons and a nerve. At that point I thought my career was over,” he said. “Doctors had no faith I would return to boxing, but I worked hard to rehab and make it back. I had to wait 12 months to fight again, and I boxed with a lot of pain in my hand, but I won. Since then, I took this as my second chance in boxing and I’ll give my best all the way to the very end.”

For now, his tribulations are behind him as he gets ready for the biggest challenge in his career, and he claims he is ready to ruin the night for Kelly’s fans in the UK.

“Training has been great. We did a great job with our team, Fernando Mendoza, Gato Olivera, Miguel Gonzalez, and my coach Gonzalo Badea. I am motivated because I am fighting for a (regional) title, and happy about this opportunity. A lot of fights didn’t end up happening for me, but I continued training anyway because this is what I like. I am pursuing my dream and I know that things can happen, but they all happened to me, apparently. But I’ve always been determined to do my best.”

The challenge of fighting abroad is not lost to him, but he claims it is an additional source of motivation.
“We are all very happy with this opportunity. My family and my partner, we are all together feeling the motivation from fans from all over Argentina, and even as far as Mexico. I get messages from all kinds of people. I have to be there for them, I can’t let them down.”

The home advantage may be significant for Kelly in this fight, but in every other department, Bastida sees an even fight.

“On paper he has a good record. But if we analyze our records, you see I have a stoppage loss, but it was due to a cut. I never touched the canvas. He went to the canvas twice and his people had to throw the towel on him. So that demonstrates that he’s not a true junior middleweight. We are going to prove that.

“I see myself as the winner. I have a lot of faith in myself. We have trained very well. I know that as soon as I lay my hands on him the fight will be over. I see what Kelly has to offer. I don’t think he’ll mix it up with me, I believe he’ll walk the ring more. But we are ready for whatever he wants to bring on. We are aware that we are going to his home, but in the ring it is just me and him. When the bell rings, we will see who’s better.”

Kelly returns to the ring following an impressive stoppage victory over Peter Kramer on June 17 in Liverpool. The Sunderland boxer, who represented Team GB at the 2016 Rio Olympics and has previously held the Commonwealth welterweight title, can expect one of his toughest career tests when he takes on Bastida.

Also on the card is Harlem Eubank (14-0, 6 KOs) who will be looking to establish himself as the latest star name from his famous boxing family. The nephew of British boxing legend Chris Eubank Sr. and cousin of Chris Eubank Jr will meet Mexico’s Eliot Chavez (11-4-1, 6 KOs) in a junior welterweight showdown.

Opening the card, heavyweight ‘Drago’ Steve Robinson (4-1) will be hunting for another blockbuster finish when the 6’7” giant from Newcastle looks to provide a finish worthy of his nickname. Future prospect Kai Richmond (1-0) will also be aiming to get the crowd on their feet after a good professional debut earlier this year.